Motivating example: Euclidean space:-One of the most familiar examples of a Hilbert space is the Euclidean space consisting of three-dimensional vectors, denoted by ℝ3, and equipped with the dot product. The dot product takes two vectors x and y, and produces a real number x · y. If x and y are represented in Cartesian coordinates, then the dot product is defined by

The dot product satisfies the properties:

Multivariable calculus in Euclidean space relies on the ability to compute limits, and to have useful criteria for concluding that limits exist. A mathematical series

consisting of vectors in ℝ3 is absolutely convergent provided that the sum of the lengths converges as an ordinary series of real numbers:

Just as with a series of scalars, a series of vectors that converges absolutely also converges to some limit vector L in the Euclidean space, in the sense that 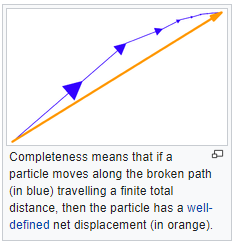 This property expresses the completeness of Euclidean space: that a series that converges absolutely also converges in the ordinary sense.Hilbert spaces are often taken over the complex numbers. The complex plane denoted by ℂ is equipped with a notion of magnitude, the complex modulus |z| which is defined as the square root of the product of z with its complex conjugate:

If z = x + iy is a decomposition of z into its real and imaginary parts, then the modulus is the usual Euclidean two-dimensional length:

The inner product of a pair of complex numbers z and w is the product of z with the complex conjugate of w:

This is complex-valued. The real part of ⟨z, w⟩ gives the usual two-dimensional Euclidean dot product.A second example is the space ℂ2 whose elements are pairs of complex numbers z = (z1, z2). Then the inner product of z with another such vector w = (w1, w2) is given by

The real part of ⟨z, w⟩ is then the four-dimensional Euclidean dot product. This inner product is Hermitian symmetric, which means that the result of interchanging z and w is the complex conjugate:

converges. The inner product on l2 is defined by

with the latter series converging as a consequence of the Cauchy–Schwarz inequality.Completeness of the space holds provided that whenever a series of elements from l2 converges absolutely (in norm), then it converges to an element of l2. The proof is basic in mathematical analysis, and permits mathematical series of elements of the space to be manipulated with the same ease as series of complex numbers (or vectors in a finite-dimensional Euclidean space).

Examples:- Lebesgue spaces:Main article: Lp spaceLebesgue spaces are function spaces associated to measure spaces (X, M, μ), where X is a set, M is a σ-algebra of subsets of X, and μ is a countably additive measure on M. Let L2(X, μ) be the space of those complex-valued measurable functions on X for which the Lebesgue integral of the square of the absolute value of the function is finite, i.e., for a function f in L2(X, μ),

and where functions are identified if and only if they differ only on a set of measure zero.The inner product of functions f and g in L2(X, μ) is then defined as

For f and g in L2, this integral exists because of the Cauchy–Schwarz inequality, and defines an inner product on the space. Equipped with this inner product, L2 is in fact complete. The Lebesgue integral is essential to ensure completeness: on domains of real numbers, for instance, not enough functions are Riemann integrable.The Lebesgue spaces appear in many natural settings. The spaces L2(ℝ) and L2([0,1]) of square-integrable functions with respect to the Lebesgue measure on the real line and unit interval, respectively, are natural domains on which to define the Fourier transform and Fourier series. In other situations, the measure may be something other than the ordinary Lebesgue measure on the real line. For instance, if w is any positive measurable function, the space of all measurable functions f on the interval [0, 1] satisfying

The weighted space L2w([0, 1]) is identical with the Hilbert space L2([0, 1], μ) where the measure μ of a Lebesgue-measurable set A is defined by

Spectral theory:- There is a well-developed spectral theory for self-adjoint operators in a Hilbert space, that is roughly analogous to the study of symmetric matrices over the reals or self-adjoint matrices over the complex numbers. In the same sense, one can obtain a "diagonalization" of a self-adjoint operator as a suitable sum (actually an integral) of orthogonal projection operators.The spectrum of an operator T, denoted σ(T), is the set of complex numbers λ such that T − λ lacks a continuous inverse. If T is bounded, then the spectrum is always a compact set in the complex plane, and lies inside the disc |z| ≤ ||T||. If T is self-adjoint, then the spectrum is real. In fact, it is contained in the interval [m, M] where

Moreover, m and M are both actually contained within the spectrum.The eigenspaces of an operator T are given by

Unlike with finite matrices, not every element of the spectrum of T must be an eigenvalue: the linear operator T − λ may only lack an inverse because it is not surjective. Elements of the spectrum of an operator in the general sense are known as spectral values. Since spectral values need not be eigenvalues, the spectral decomposition is often more subtle than in finite dimensions.However, the spectral theorem of a self-adjoint operator T takes a particularly simple form if, in addition, T is assumed to be a compact operator. The spectral theorem for compact self-adjoint operators states: