The document Himalayas: Physiographic divisions of India Notes | EduRev is a part of the UPSC Course Geography for UPSC CSE.
All you need of UPSC at this link: UPSC

India is a country of vast physical diversity. There are high mountain peaks in some areas while in others, lie the flat plains formed by the deposition process of the Himalayan Rivers. The northern mountains are further divided into three groups: Try yourself:Which of the following hill/ranges is along the international boundary with Myanmar?
Explanation

The Patkai Bum, Naga Hills and Mizo Hills are along the international boundary with Myanmar.

THE HIMALAYASIntroductionThe Himalayas represent the loftiest and one of the most rugged mountain barriers of the world. They form an arc, which covers a distance of about 2,400 Km spread uninterruptedly from Jammu & Kashmir in the west to Arunachal Pradesh in the east. Their width varies from 400 Km in Kashmir to 150 Km in Arunachal Pradesh. 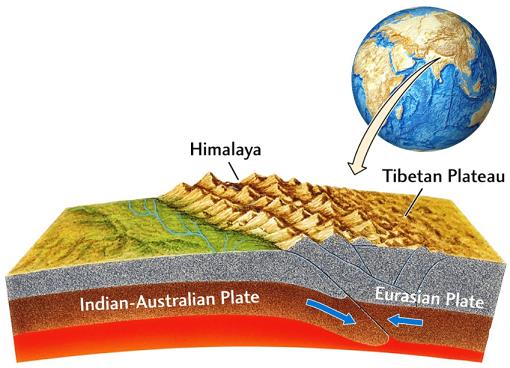 Location of Himalayas on the Earth

They are one of the 'newest fold mountains' of the world and they have come up during the Tertiary epoch under Alpine earth movement. The altitudinal variations are greater in the eastern half than those in the western half, which is why high mountain peaks like Mount Everest and Kanchenjunga are present in the Eastern Himalayas.

The Himalayas are the result of the collision between the Eurasian plate (Angaraland) and the Indo-Australian plate (Gondwanaland).

The Western Himalayas consists of three parallel ranges in its longitudinal extent. These ranges are:

Pir Panjal - It is the longest and the most important range. It starts from near PatniTop in Jammu and Kashmir all the way to Garhwal passes through Himachal Pradesh.

DhaulaDhar Range - They begin from near Dalhousie at the northwest end of Himachal Pradesh and pass through the state to the vicinity of the bank of the Beas River in the Kulu.

Try yourself:Consider the following statements regarding the Himalayas:

1. They had formed due to the collision between the Indian-Australian Plate and the Eurasian plate.
2. The highest peak of Himalayas the Mount Everest is located in Shivaliks.
3. Lesser Himalayas are composed of metamorphic rocks.

Statement 1 is correct: The Himalayas are the result of the collision between the Eurasian plate (Angaraland) and the Indo-Australian plate (Gondwanaland).
Statement 2 is incorrect: Greater Himalayas contains all prominent Himalayan peaks. The highest peak of this range is Mount Everest or ‘Sagarmatha’.
Statement 3 is correct: Lesser Himalayas/Himachal ranges have an average height of 3500-5000 m and have a width of 50-80 km. These ranges are composed of metamorphic rocks.

Besides the divisions into three parallel ranges, the Himalayas can also be divided on the basis of regions from west to east into the following: These divisions are demarcated by the river valleys:

Try yourself:Which of the following regional Himalayas consist of  Karewa soil which is famous for the saffron and other dry fruit cultivation?
Explanation

Try yourself:Consider the following statements:
1. Fedchenko is the longest glacier in the world outside of the polar regions.
2. The western Himalayas snowline is at a higher altitude than the eastern Himalayas.
Which of the statements given above is/are correct?
Explanation

Statement 1 is correct: Karakoram Range: Siachen, Fedchenko (It is the longest glacier in the world outside of the polar regions), Hispar, Biafo and Baltoro.
Statement 2 is incorrect: The snowline in the Western Himalaya is at a lower altitude than in the Eastern Himalaya, due to an increase in latitude.

The Himalayas contain many of the world’s tallest peaks, including Nanga Parbat, Annapurna, Mount Everest, Mount K2 and Kanchenjunga. The Himalayan mountain system is home to about 10 of 14 of the world's highest peaks. It also contains more than 50 peaks that have a height of over 7,000 m.

A mountain pass is a navigable route through a mountain range or over a ridge. A pass forms when a glacier or stream erodes or wears away, the land between areas of higher terrain. Passes often provide the easiest routes for people to travel across steep mountain ranges.

Important Passes in IndiaA mountain pass is a navigable route through a mountain range or over a ridge. A pass forms when a glacier or stream erodes or wears away, the land between areas of higher terrain. Passes often provide the easiest routes for people to travel across steep mountain ranges. Passes of The Eastern Himalayas:

Which of the pairs given above is/are correct?

Statement 1 is correct: Khardunga la: The world’s highest motorable passes through this pass

Statement 2 is correct: Mulinga la: It is situated in the north of Gangotri Glacier

Statement 3 is correct: Jelep la: It passes through Chumbi Valley

Comparison between Northern and Southern slopes of Himalayas: