Acid catalysisThe proton is a pervasive homogeneous catalyst because water is the most common solvent. Water forms protons by the process of self-ionization of water. In an illustrative case, acids accelerate (catalyze) the hydrolysis of esters:CH3CO2CH3 + H2O ⇌ CH3CO2H + CH3OHAt neutral pH, aqueous solutions of most esters do not hydrolyze at practical rates. 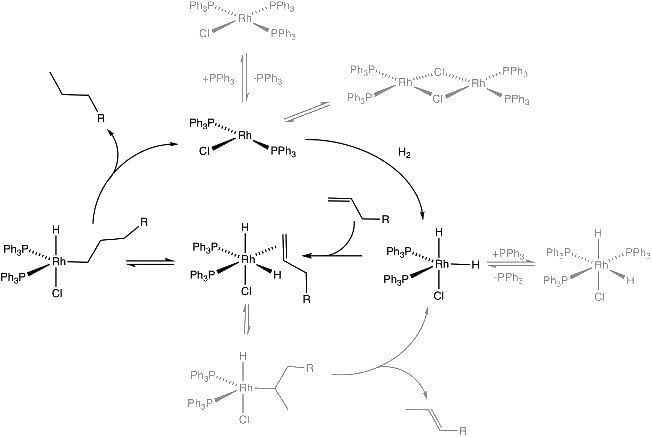 Mechanism for the hydrogenation of an alkene catalyzed by the homogeneous catalyst Wilkinson's catalyst.

(ii) CarbonylationsHydroformylation, a prominent form of carbonylation, involves the addition of H and "C(O)H" across a double bond. This process is almost exclusively conducted with soluble rhodium- and cobalt-containing complexesA related carbonylation is the conversion of alcohols to carboxylic acids. MeOH and CO react in the presence of homogeneous catalysts to give acetic acid, as practiced in the Monsanto process and Cativa processes. Related reactions include hydrocarboxylation and hydroesterifications.(iii) Polymerization and metathesis of alkenesA number of polyolefins, e.g. polyethylene and polypropylene, are produced from ethylene and propylene by Ziegler-Natta catalysis. Heterogeneous catalysts dominate, but many soluble catalysts are employed especially for stereospecific polymers. Olefin metathesis is usually catalyzed heterogeneously in industry, but homogeneous variants are valuable in fine chemical synthesis. 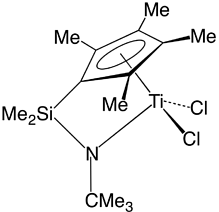 A constrained geometry complex. Such precatalysts are used for the production of polyolefins such as polyethylene and polypropylene.

(iv) OxidationsHomogeneous catalysts are also used in a variety of oxidations. Is the Wacker process, acetaldehyde is produced from ethylene and oxygen. Many non-organometallic complexes are also widely used in catalysis, e.g. for the production of terephthalic acid from xylene. Alkenes are epoxidized and dihydroxylated by metal complexes, as illustrated by the Halcon Process and the Sharpless dihydroxylation.

Enzymes (including metalloenzymes)Enzymes are homogeneous catalysts that are essential for life but are also harnessed for industrial processes. A well-studied example is carbonic anhydrase, which catalyzes the release of CO2 into the lungs from the bloodstream. Enzymes possess properties of both homogeneous and heterogeneous catalysts. As such, they are usually regarded as a third, separate category of catalyst. Water is a common reagent in enzymatic catalysis. Esters and amides are slow to hydrolyze in neutral water, but the rates are sharply affected by metalloenzymes, which can be viewed as large coordination complexes. Acrylamide is prepared by the enzyme-catalyzed hydrolysis of acrylonitrile. US demand for acrylamide was 253,000,000 pounds (115,000,000 kg) as of 2007.