The answer is Cleans up the air.

We have a pair of external nostrils opening out above the upper lips. It leads to a nasal chamber through the nasal passage. The nasal chamber opens into nasopharynx, which is a portion of pharynx, the common passage for food and air. Nasopharynx opens through glottis of the larynx region into the trachea. Larynx is a cartilaginous box which helps in sound production and hence called the sound box. During swallowing glottis can be covered by a thin elastic cartilaginous flap called epiglottis to prevent the entry of food into the larynx. Trachea is a straight tube extending up to the mid-thoracic cavity, which divides at the level of 5th thoracic vertebra into a right and left primary bronchi. Each bronchi undergoes repeated divisions to form the secondary and tertiary bronchi and bronchioles ending up in very thin terminal bronchioles. The tracheae, primary, secondary and tertiary bronchi, and initial bronchioles are supported by incomplete cartilaginous rings. Each terminal bronchiole gives rise to a number of very thin, irregular- walled and vascularised bag-like structures called alveoli. The branching network of bronchi, bronchioles and alveoli comprise the lungs (Figure 17.1). We have two lungs which are covered by a double layered pleura, with pleural fluid between them. It reduces friction on the lung- surface. The outer pleural membrane is in close contact with the thoracic lining whereas the inner pleural membrane is in contact with the lung surface. The part starting with the external nostrils up to the terminal bronchioles constitute the conducting part whereas the alveoli and their ducts form the respiratory or exchange part of the respiratory system. The conducting part transports the atmospheric air to the alveoli, clears it from foreign particles, humidifies and also brings the air to body temperature. Exchange part is the site of actual diffusion of O2 and CO2 between blood and atmospheric air. 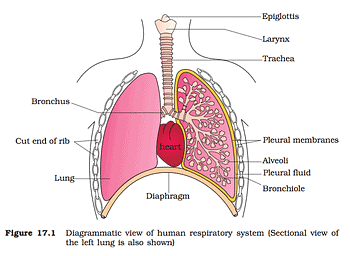 (i)  Breathing or pulmonary ventilation by which atmospheric air is drawn in and CO2 rich alveolar air is released
out.
(ii)  Diffusion of gases (O2 and CO2) across alveolar membrane.
(iii)  Transport of gases by the blood.
(iv)  Diffusion of O2 and CO2 between blood and tissues.
(v)  Utilisation of O2 by the cells for catabolic reactions and resultant release of CO2