8.2 Definitions of hydroprocessing, hydrotreating and hydrocracking 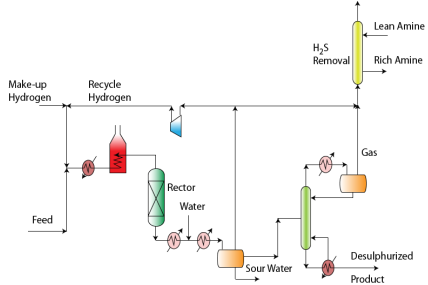 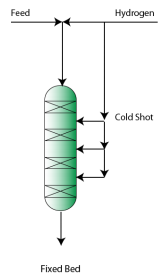 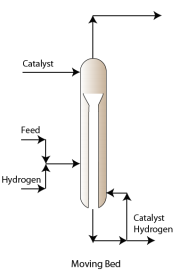 Ans: Here, the principle of maximizing H2S, NH3 removal by absorption into water is facilitated. All other hydrocarbons and hydrogen do not have much solubilities in water when compared to these two gases. Usually, a phase separator is assumed to produce two phases namely gas or liquid or two separate liquids based on densities. But here, due to injection of water and cooling, three phases are existent. These are gas (hydrogen rich), water (NH3 and H2S rich) and the hydrotreated product (H2S and H2 lean).

2. Explain why one heat exchanger is used before mixing water and one is used after mixing?

Ans: This is a very intelligent question. After years of research and process simulation studies, such optimal conditions of mixing and cooling have been obtained. Cooling the reactor product first is targeted for mixing and cooling after mixing is targeted to maximize solubilities of NH3 and H2S in the water stream.

3. Can we use steam instead of reboiler in the fractionator?

Ans: This is also an important question. Steam utilization instead of reboilers is usually carried out for heavier hydrocarbons but not for the light hydrocarbons such as naphtha and gas oil. This is to ensure that lighter hydrocarbons are easily stripped from the heavier desulphurized product and good product quality is obtained in the top and bottom products of the fractionators.

4. Do we produce only gas when steam stripping facilitiated in the fractionators?

Ans: No, we produce three products from the partial condenser of the fractionator. These are (a) sour water (steam condenses to form water), unstabilized naphtha (this will again enter a stabilization unit) and a gas stream.

6. Why two phase separators are used for the reactor product in hydrocracking flowsheet?

Ans: The first phase separator provides three streams based on its temperature and pressure. However, when the temperature of the gas stream is again reduced, again two phase streams would emanate. This is due to the heat removal and due to this reason, adiabatic flash conditions would exist and two streams would be generated. The second phase separator could be optional as well, but it will affect the catalyst performance. Long term performance studies along with process simulation studies provide such minor changes in the process flow sheet which are important to eventually phase out long term profitability of the hydrocracking flow sheet.