Hydrostatic Thrusts on Submerged Plane SurfaceDue to the existence of hydrostatic pressure in a fluid mass, a normal force is exerted on any part of a solid surface which is in contact with a fluid. The individual forces distributed over an area give rise to a resultant force.

Consider a plane surface of arbitrary shape wholly submerged in a liquid so that the plane of the surface makes an angle θ with the free surface of the liquid. We will assume the case where the surface shown in the figure below is subjected to hydrostatic pressure on one side and atmospheric pressure on the other side. Let p denotes the gauge pressure on an elemental area dA. The resultant force F on the area A is therefore

Where h is the vertical depth of the elemental area dA from the free surface and the distance y is measured from the x-axis, the line of intersection between the extension of the inclined plane and the free surface (Fig. 5.1). The ordinate of the centre of area of the plane surface A is defined as

(5.4)where hc (yc sin θ) is the vertical depth (from free surface) of centre c of area .Equation (5.4) implies that the hydrostatic thrust on an inclined plane is equal to the pressure at its centroid times the total area of the surface, i.e., the force that would have been experienced by the surface if placed horizontally at a depth hc from the free surface (Fig. 5.2). 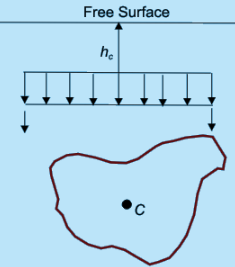 (5.6)In the same manner, the x coordinate of the centre of pressure can be obtained by taking moment about the y-axis. Therefore,

(5.7)The two double integrals in the numerators of Eqs (5.6) and (5.7) are the moment of inertia about the x-axis Ixxand the product of inertia  Ixy about x and y axis of the plane area respectively. By applying the theorem of parallel axis

where, I x' x' and I x' y'  are the moment of inertia and the product of inertia of the surface about the centroidal axes (x' - y'), xc, and yc are the coordinates of the center c of the area with respect to x-y axes.

(5.10b)The first term on the right hand side of the Eq. (5.10a) is always positive. Hence, the centre of pressure is always at a higher depth from the free surface than that at which the centre of area lies. This is obvious because of the typical variation of hydrostatic pressure with the depth from the free surface. When the plane area is symmetrical about the y' axis, I x' y' = 0, and xp = xc . Hydrostatic Thrusts on Submerged Curved SurfacesOn a curved surface, the direction of the normal changes from point to point, and hence the pressure forces on individual elemental surfaces differ in their directions. Therefore, a scalar summation of them cannot be made. Instead, the resultant thrusts in certain directions are to be determined and these forces may then be combined vectorially. An arbitrary submerged curved surface is shown in Fig. 5.3. A rectangular Cartesian coordinate system is introduced whose xy plane coincides with the free surface of the liquid and z-axis is directed downward below the x - y plane. Fig 5.3   Hydrostatic thrust on a Submerged Curved SurfaceConsider an elemental area dA at a depth z from the surface of the liquid. The hydrostatic force on the elemental area dA isd F = p g z dA       (5.11)  and the force acts in a direction normal to the area dA. The components of the force dF in x, y and z directions are

Therefore, the components of the total hydrostatic force along the coordinate axes are

where zc is the z coordinate of the centroid of area Ax and Ay (the projected areas of curved surface on yz and xz plane respectively). If zp and yp are taken to be the coordinates of the point of action of Fx on the projected area Ax on yz plane, , we can write

where Iyy is the moment of inertia of area Ax about y-axis and Iyz is the product of inertia of Ax with respect to axes y and z. In the similar fashion, zp' and x p' the coordinates of the point of action of the force Fy on area Ay, can be written as