After studying this chapter, you will be able to :

Fixed assets like plant and machinery etc. are used in the business for the purpose of production of goods or for providing useful services in the course of production. These fixed assets are utilized during operations of a business for a number of successive accounting periods. Value of such fixed assets decreases with passage of time and its utilization i.e. wear and tear. Value of portion of fixed asset utilized for generating revenue must be recovered during a particular accounting year to ascertain true income. This portion of cost of fixed asset allocated to a particular accounting year is called depreciation.

Depreciation has been defined as ‘the diminution in the utility or value of an asset, due to natural wear and tear, exhaustion of the subject-matter, effluxion of time accident, obsolescence or similar causes’. The words “accident”, “obsolescence” and the phrase “effluxion of time” included in the definition, signify that when an asset held by a business cannot be employed for even one of the purposes for which it was acquired due to some damage suffered, the assets having become out of date or due to no occasion having arisen for it to be used, the loss caused to the business will be depreciation. Depreciation caused by any one of the last mentioned factors often is described as external depreciation, to distinguish it from the natural wear and tear of assets which is known as internal depreciation.

is a measure of wearing out, consumption or other loss of value of a depreciable asset arising from use, effluxion of time or obsolescence through technology and market changes. Depreciation is allocated so as to charge a fair proportion of the depreciable amount in each accounting period during the expected useful life of the asset. Depreciation includes amortisation of asset whose useful life is predetermined’.

are those which (i) are expected to be used during more than one accounting period; and (ii) have a limited useful life; and (iii) are held by an enterprise for use in the production or supply of goods and services for rental to others or for administrative purposes and not for the purpose of sale in the ordinary course of business.

The loss in the value of assets employed for carrying on a business being an essential element of business expenditure, it is necessary to calculate the amount of such loss and to make a provision, and therefore, arrive at the amount of profit or loss made by the business.Basically, the cost of an asset used for purpose of business has to be written off over its economic (not physical) life which necessarily must be estimated. A point to remember is that usually, at the end of the economic life, an asset has some value as scrap or otherwise. The amount to be written off in each year should be as such which will reduce the book value of the asset, at the end of its economic life, to its estimated scrap value.A pertinent question, of course, is the price likely to prevail at the time of replacement. That is why some people advocate the calculation of depreciation on the basis of replacement price rather than cost.

Prime objectives for providing depreciation are:

(1) Correct income measurement: Depreciation should be charged for proper estimation of periodic profit or loss.

(2) True position statement: Value of the fixed assets should be adjusted for depreciation charged in order to depict the actual financial position.

Further depreciation is a non-cash expense and unlike other normal expenditure (e.g. wages, rent, etc.) does not result in any cash outflow. Further depreciation by itself does not create funds it merely draws attention to the fact that out of gross revenue receipts, a certain amount should be retained for replacement of assets used for carrying on operation.

2. FACTORS IN THE MEASUREMENT OF DEPRECIATION

2. Estimated useful life of the asset.

3. Estimated scrap value (if any) at the end of useful life of the asset.

The above mentioned factors can be explained, in detail, as follows:

Cost of a depreciable asset represents its money outlay or its equivalent in connection with its acquisition, installation and commissioning as well as for additions to or improvement thereof for the purpose of increase in efficiency.

‘Useful Life’ is either (i) the period over which a depreciable asset is expected to be used by the enterprise or (ii) the number of production or similar units expected to be obtained from the use of the asset by the enterprise. Determination of the useful life is a matter of estimation and is normally based on various factors including experience with similar type of assets. Several other factors like estimated working hours, production capacity, repairs and renewals, etc. are also taken into consideration on demanding situation. 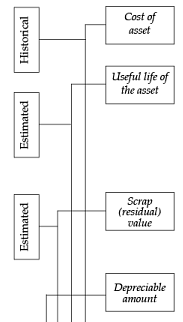 For example, a machinery is purchased for

1,000. It is estimated that the machinery will work for 5 years.The cost to be allocated as depreciation in the accounting periods will be calculated as:

Generally, methods for providing depreciation are based on formula, developed on a study of the behaviour of the assets over a period of years for readily computing the amount of depreciation suffered by different forms of assets. Each of the methods, however, should be applied only after carefully considering nature of the asset and the conditions under which it is being used. The two most common methods for providing depreciation are the Straight Line Method and the Reducing Balance Method. The Straight Line Method is the most suitable and accurate method to adopt in most cases. The Income Tax Rules, however, prescribe the Reducing Balance Method except in the case of assets of an undertaking engaged in generation and distribution of power.

According to this method, an equal amount is written off every year during the working life of an asset so as to reduce the cost of the asset to nil or its residual value at the end of its useful life. The advantage of this method is that it is simple to apply and gives accurate results especially in case of leases, patents and copy rights, and also in case of plant and machinery. Calculation of depreciation for additions to plant and machinery may be a complicated affair unless different classes of machines are classified separately in a plant register based on year of additions. This method is also known as Fixed Instalment Method.

The underlying assumption of this method is that the particular asset generates equal utility during its lifetime. But this cannot be true under all circumstances. The expenditure incurred on repairs and maintenance will be low in earlier years, whereas the same will be high as the asset becomes old. Apart from this the asset may also have varying capacities over the years, indicating logic for unequal depreciation provision. However, many assets have insignificant repairs and maintenance expenditures for which straight line method can be applied.

Under this system, a fixed percentage of the diminishing value of the asset is written off each year so as to reduce the asset to its break - up value at the end of its life, repairs and small renewals being charged to revenue. This method is commonly used for plant, fixtures, etc. Under this method, the annual charge for depreciation decreases from year to year, so that the earlier years suffer to the benefit of the later years. Also, under this method, the value of asset can never be completely extinguished, which happens in the earlier explained Straight Line Method. However, it is very simple to operate. The other advantage of this method is that the total charge to revenue is uniform when the depreciation is high, repairs are negligible; and as the repairs increase, the burden of depreciation gets lesser and lesser. On the other hand, under the Straight Line Method, the charge for depreciation is constant, while repairs tend to increase with the life of the asset. Among the disadvantages of this method is the danger that too low a percentage may be adopted as depreciation with the result that over the life of the asset full depreciation may not be provided; also if assets are grouped in such a way that individual assets are difficult to identify, the residue of an asset may lie in the asset account even after the asset has been scrapped. The last mentioned difficulty could be, however, over come if a Plant register is maintained.

The rate of depreciation under this method may be determined by the following formula:

Accounting Entries under Straight Line and Reducing Balance Methods : There are two alternative approaches for recording accounting entries for depreciation.

A provision for depreciation account is opened to accumulate the balance of depreciation and the assets are carried at historical cost.

1,000 on its installation. The firm writes off depreciation at 10% p.a. of the original cost every year. The books are closed on 31st December every year. Show the Machinery Account and Depreciation Account for the year 2010 and 2011.Solution

As per Straight Line Method

1,000 on its installation. The firm writes off depreciation at 10% p.a. every year. The books are closed on 31st December every year. Show the Machinery Account on diminishing balance method for the year 2010 and 2011.

3.3 SUM OF YEARS OF DIGITS METHOD

It is variation of the “Reducing Balance Method”. In this case, the annual depreciation is calculated by multiplying the original cost of the asset less its estimated scrap value by the fraction represented by :

The method is not yet in vogue in india; and its advantages are the same as those of the Reducing Balance Method.

12,000 respectively. The machine was put to use on 1.1.2006. Show Machinery Account and Depreciation Account in their books for 2011 by using sum of years digits method.