Accordingly, closing stock of 1,000 pcs. would have been valued at 51,190 @ ₹51.19 per unit.5.2 NON-HISTORICAL COST METHODS :-Non-historical cost methods do not consider the historical cost incurred to acquire the goods. Non- historical cost methods include Adjusted Selling Price method and Standard Cost method. Adjusted Selling Price method can be explained as follows:(i)  Adjusted selling price method:- This method is also called retail inventory method. It is used widely in retail business or in business where the inventory comprises of items, the individual costs of which are not readily ascertainable. The use of this method is appropriate for measuring inventories of large numbers of rapidly changing items that have similar margins and for which it is impracticable to use other costing methods. The cost of the inventory is determined by reducing from the sales value of the inventory an appropriate percentage of gross margin. The percentage used takes into consideration inventory which has been marked below its original selling price. An average percentage for each retail department is often used. The calculation of the estimated gross margin of profit may be made for individual items or groups of items or by departments, as may be appropriate to the circumstances.ILLUSTRATION 5:- M/s  X,  Y and Z are in retail business, following information are obtained from their records for the year ended 31st March, 2016:

Find out the historical cost of inventories using adjusted selling price method.SOLUTION:-Determination of cost of purchases:-

SOLUTION:-Calculation of gross margin of profit:-

Cost of closing inventory = 50,000 less 20% of ₹50,000 =  ₹40,000(ii) Standard cost method:- This method is used when there is frequent change in the price per unit of the goods and goods are purchased frequently by the business e.g. crude oil. Based on the experience a standard cost is determined on the basis of frequent changes in prices and inventory is valued on that price per unit.6. INVENTORIES TAKING:- Normally all operations are suspended for one or two days during the financial year and physical inventory is taken for everything in the godown or the store periodically. For the year-end inventory valuation, physical inventory taking is done during the last week of the financial year or during the first week of next financial year. If inventory taking is finished on 26th March, whereas accounting year ends on 31st March purchases and sales between 26th and 31st March are then separately adjusted. Later, a value is put on each item. The principle of cost or Net realizable value, whichever is lower, is applied either for the inventory as a whole or item by item.Normally, enterprises prefer to perform inventory taking closing day, however, sometimes inventory taking cannot be carried out on the closing day. It is carried out a few days later or sometimes even a few days earlier. In such a case, the actual value of the inventory must be so adjusted as to relate it to the end of the year concerned. For doing so, it will be necessary to take into account the goods that have come in (purchases and sales returns) and those that have gone out (sales and purchase returns) during the interval between the close of the year and the date of actual inventory taking. Further, the adjustment of all goods must be on the basis of cost. Suppose, a firm that closes its books on 31st December, carried out the inventory taking on the 7th January next year and actual inventory was of the cost of ₹7,85,000, during the period January 1 to 7 purchases were ₹1,53,000 and sales ₹2,50,000, the mark up being 25% on cost. The inventory on 31st December would be ₹8,32,000 as shown below:

ILLUSTRATION 7:-From the following particulars ascertain the value of Inventories as on 31st March, 2017:

At the time of valuing inventory as on 31st March, 2016, a sum of ₹17,500 was written off on a particular item, which was originally purchased for ₹50,000 and was sold during the year for ₹45,000. Barring the transaction relating to this item, the gross profit earned during the year was 20 percent on sales.SOLUTION:-Statement of Inventory in trade as on 31st March, 2017

ILLUSTRATION 9:-Inventory taking for the year ended 31st March, 2016 was completed by 10th April 2016, the valuation of which showed a inventory figure of ₹16,75,000 at cost as on the completion date. After the end of the accounting year and till the date of completion of inventory taking, sales for the next year were made for ₹68,750, profit margin being 33.33 percent on cost. Purchases for the next year included in the inventory amounted to ₹90,000 at cost less trade discount 10 percent. During this period, goods were added to inventory at the mark up price of ₹3,000 in respect of sales returns. After inventory taking it was found that there were certain very old slow moving items costing ₹11,250, which should be taken at ₹5,250 to ensure disposal to an interested customer. Due to heavy flood, certain goods costing ₹15,500 were received from the supplier beyond the delivery date of customer. As a result, the customer refused to take delivery and net realizable value of the goods was estimated to be ₹12,500 on 31st March. Compute the value of inventory for inclusion in the final accounts for the year ended 30th March, 2016.SOLUTION:- Statement showing the valuation of Inventory as on 31st March, 2016

ILLUSTRATION 10:- The following are the details of a spare part of Sriram mills:

Find out the value of Inventory as on 31-3-2016 if the company follows First in first out basis.SOLUTION:-First-in-First out basis

At the time of valuing stock as on 31st March, 2015, a sum of ₹17,500 was written off on a particular item, which was originally purchased for ₹50,000 and was sold during the year at ₹45,000. Barring the transaction relating to this item, the gross profit earned during the year

MCQs1. (c) 2. (c) 3. (b) 4. (c) 5. (c) 6 (c) 7. (c) 8. (a) 9. (c) 10. (b) 11. (c) 12. (a) 13. (b) 14. (a) 15. (c)Theoretical Questions:-1(i) Adjusted selling method is also called retails inventory method. It is used widely in retail business or in business where the inventory comprises of items, the individual costs of which are not readily ascertainable. The historical cost of inventory is estimated by calculating it in the first instance at selling price and then deducting an amount equal to the estimated gross margin of profit on such stocks.  (ii) The specific identification method, First-In–First-Out (FIFO) and weighted average cost formulae are the principal methods of ascertaining the cost of inventory. The cost of inventories of items that are not ordinarily interchangeable and goods or services produced and segregated for specific projects should be assigned by specific identification of their individual costs under the specific identification method.2 (i) Under FIFO method of inventory valuation, inventories purchased first are issued first. The closing inventories are valued at latest purchase prices and inventory issues are valued at corresponding old purchase prices. In other words, under FIFO method, costs are assigned to the units issued in the same order as the costs entered in the inventory. During periods of rising prices, cost of goods sold are valued at older and lower prices if FIFO is followed and consequently reported profits rise due to lower cost of goods sold.On the other hand, under LIFO method of inventory valuation, units of inventories issued should be valued at the prices paid for the latest purchases and closing inventories should be valued at the prices paid for earlier purchases. In other words, closing inventories are valued at old purchase prices and issues are valued at corresponding latest purchase prices.2(ii) Under the First-In-First-Out (FIFO) method of valuation of stock, the actual issue of goods is usually the earliest lot on hand. Hence, the stock in hand will therefore consist of the latest consignments. The closing stock is valued at the price paid for such consignments.The weighted average price method is not a simple average price method. Under this method of valuation of stock, a stock ledger is maintained, recording receipts and issues on daily basis. A new average would be calculated on receiving fresh consignment. The average price thus calculated after considering arrival of new consignment with the previous value of stock and dividing the preceding stock value and the cost of new arrival with the total units of preceding and new arrival will give the weighted average price.3. Inventory can be defined as assets held

The significance of inventory valuation arises due to the following reasons:(i) Determination of Income(ii) Ascertainment of Financial Position(iii) Liquidity Analysis(iv) Statutory Compliance

Practical Questions Answer 1Statement of Valuation of Physical Stock as on 31st March, 2016

Note: The value of closing stock on 31st March, 2017 may, alternatively, be found out by preparing Trading Account for the year ended 31st March, 2017.Answer 3:-Profit and Loss Adjustment Account 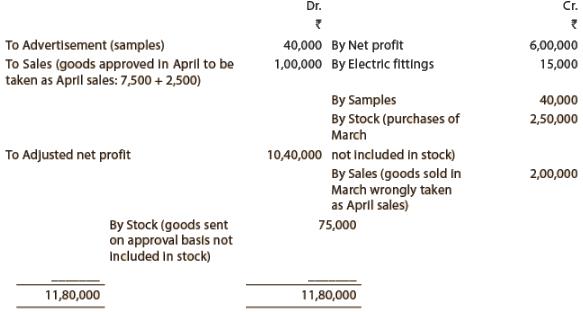 Calculation of value of inventory on 31st March, 2016