IP Version 6 (IPV6)|In many respects, the motivation for a new version of IP is the same as the motivation for the techniques described so far in this section: to deal with scaling problems caused by the Internet’s massive growth. Subnetting and CIDR have helped to contain the rate at which the Internet address space is being consumed (the address depletion problem) and have also helped to control the growth of routing table information needed in the Internet’s routers (the routing information problem).

However, there will come a point at which these techniques are no longer adequate. In particular, it is virtually impossible to achieve 100% address utilization efficiency, so the address space will be exhausted well before the 4 billionth host is connected to the Internet. Even if we were able touse all 4 billion addresses, it’s not too hard to imagine ways that that number could be exhausted, such as the assignment of IP addresses to mobile phones, televisions, or other household appliances.Historical PerspectiveThe IETF began looking at the problem of expanding the IP address space in 1991, and several lternatives were proposed. Since the IP address is carried in the header of every IP packet, increasing the size of the address dictates a change in the packet header.This means a new version of the Internet Protocol, and as a consequence, a need for new software for every host and router in the Internet. This is clearly not a trivial matter—it is a major change that needs to be thought about very carefully. The effort to define a new version of IP was known as IP Next Generation, or IPng. As the work progressed, an official IP version number was assigned, so IPng is now known as IPv6. Note that the version of IP discussed so far in this chapter is version 4 (IPv4). The apparent discontinuity in numbering is the result of version number 5 being used for an experimental protocol some years ago. The significance of the change to a new version of IP caused a snowball effect.

Addresses and RoutingFirst and foremost, IPv6 provides a 128-bit address space, as opposed to the 32 bitsof version 4. Thus, while version 4 can potentially address 4 billion nodes if addressassignment efficiency reaches 100%, IPv6 can address 3.4× 1038 nodes, again assuming100% efficiency. As we have seen, though, 100% efficiency in address assignment is notlikely. Some analysis of other addressing schemes, such as those of the French and U.S.telephone networks, as well as that of IPv4, have turned up some empirical numbers foraddress assignment efficiency.Address Space AllocationDrawing on the effectiveness of CIDR in IPv4, IPv6 addresses are also classless, but the address space is still subdivided in various ways based on the leading bits. Rather than specifying different address classes, the leading bits specify different uses of the IPv6 address. This allocation of the address space warrants a little discussion. First, the entire functionality of IPv4’s three main address classes (A, B, and C) is contained inside the “everything else” range. Global unicast addresses, as we will see shortly, are a lot like classless IPv4 addresses, only much longer.

These are the main ones of interest at this point, with over 99% of the total IPv6 address space available to this important form of address. (At the time of writing, IPv6 unicast addresses are being allocated from the block that begins 001, with the remaining address space—about 87%—being reserved for future use.) The multicast address space is (obviously) for multicast, thereby serving the same role as class D addresses in IPv4. Note that multicast addresses are easy to distinguish— they start with a byte of all 1s.Address NotationJust as with IPv4, there is some special notation for writing down IPv6 addresses. The standard representation is x:x:x:x:x:x:x:x where each “x” is a hexadecimal representation of a16-bit piece of the address. An example would be 7CD:1234:4422:ACO2:0022:1234:A456:0124 Any IPv6 address can be written using this notation. Since there are a few special types of IPv6 addresses, there are some special notations that may be helpful in certain circumstances.

For example, an address with a large number of contiguous 0s can be written more compactly by omitting all the 0 fields. Thus,47CD:0000:0000:0000:0000:0000:A456:0124 could be written 47CD::A456:0124 Clearly, this form of shorthand can only be used for one set of contiguous 0s in an address to avoid ambiguity. Since there are two types of IPv6 addresses that contain an embedded IPv4 address, these have their own special notation that makes extraction of the IPv4 address easier. For example, the IPv4-mapped IPv6 address of a host whose IPv4 address was 128.96.33.81 could be written as ::FFFF:128.96.33.81That is, the last 32 bits are written in IPv4 notation, rather than as a pair of hexadecimal numbers separated by a colon. Note that the double colon at the front indiates the leading 0s.

Global Unicast AddressesBy far the most important sort of addressing that IPv6 must provide is plain old unicast addressing. It must do this in a way that supports the rapid rate of addition of new hosts to the Internet and that allows routing to be done in a scalable way as the number of physical networks in the Internet grows. Thus, at the heart of IPv6 is the unicast address allocation plan that determines how unicast addresses will be assigned to service providers, autonomous systems, networks, hosts, and routers.Packet FormatDespite the fact that IPv6 extends IPv4 in several ways, its header format is actually simpler. This simplicity is due to a concerted effort to remove unnecessary functionality from the protocolAs with many headers, this one starts with a Version field, which is set to 6 for IPv6. The Version field is in the same place relative to the start of the header as IPv4’s Version field so that header-processing software can immediately decide which header format to look for. The TrafficClass and FlowLabel fields both relate to quality of service issues, The PayloadLen field gives the length of the packet, excluding the IPv6 header,measured in bytes. The NextHeader field cleverly replaces both the IP options and the Protocol field of IPv4. If options are required, then they are carried in one or more special headers following the IP header, and this is indicated by the value of the NextHeader field. If there are no special headers, the NextHeader field is the demux 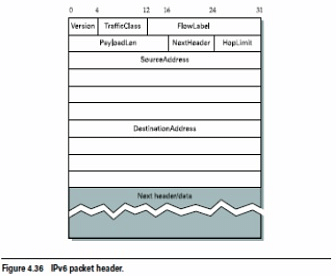 Auto configurationWhile the Internet’s growth has been impressive, one factor that has inhibited faster acceptance of the technology is the fact that getting connected to the Internet has typically required a fair amount of system administration expertise. In particular, every host that is connected to the Internet needs to be configured with a certain minimum amount of information, such as a valid IP address, a subnet mask for the link to which it attaches, and the address of a name server.

Advanced Routing CapabilitieAnother of IPv6’s extension headers is the routing header. In the absence of this header, routing for IPv6 differs very little from that of IPv4 under CIDR. The routing header contains a list of IPv6 addresses that represent nodes or topological areas that the packet should visit en route to itsdestination.