The document Immune System and Immunity NEET Notes | EduRev is a part of the NEET Course Biology Class 12.
All you need of NEET at this link: NEET System of body which protects the body from disease is called immune system. ('Immune = Exempt or Freedom) Some terms related to immunity :

(1) Immunity : Resistance of the body against a pathogen or disease.

(2) Antigen or Agglutinogen : Proteinous substance which stimulates the production of antibodies.

(3) Antibody or Agglutinin : It is a complex glycoprotein secreted by B-lymphocytes in response to an antigen.

(4) Antiserum : Serum of any animal which contains the antibody for a specific antigen is called antiserum.

(5) Venom (poison) : Toxic substances secrete by snake and some insect.

(7) Toxoid : A bacterial exotoxin which is detoxicated by special procedures to allow its safe use in immunization against the disease.

(8) Interleukin : It is a protein substances which stimulate the growth and activate certain kind of W.B.C. that are involved in Immune response, also act as a secondary messenger that activates the immune system.

It is present in most of the animals by birth. It is first line of defence of body. It is made up of following barriers.

(A) Anatomical Barrier : It is made up of two parts :-

(i) Skin : Outermost layer of skin is dead (str. corneum), so the bacteria does not grow or enter into it. pH of skin destroy the bacteria, sebum of skin also has anti bacterial action.

Mucosa entraps the micro-organism and cilia propell the microbes.

(B) Physiological Barriers : many physiological functions of body make an unfavourable environment for the growth of microbes.

(i) Fever : High temp. of body, inhibit the growth of microbes.

(ii) pH of body : Acidic pH of various part of body like oral cavity, stomach and Vagina inhibit the growth of microbes.

(iv) Interferon : Anti-viral protein made up to 270 amino acids secreted by virus infected cells and sitmulates the adjacent cells to produce the Translation Inhibiting Protein (T.I.P.) By this mechanism interferon limits the infection of virus.

Certain kind of vertebrate cells when infected with a virus respond by releasing a small amount of a class of glycoprotein called interferons. INFs form cytokine barrier of innate immunity.

Interferons are species specific i.e. interferons produced by one species can protect only cells of same species against viral infection.

Interferons make cells resistant to viral infection by synthesis of antiviral proteins in that cell.

Interferons can be used for prophylaxis and treatment of viral infections.

INFs - α = activate immune system and destroy tumor. Also has shown some success in causing of regression of Kaposi sarcoma.

(C) Phagocytic Barrier :- In response to pathogenic infection, the total count of WBC in body increases. Phagocytosis is exhibited by some types of WBC's. Such WBC's are called phagocytes.

Most important phagocytes are Macrophages and Neutrophils. Monocytes are liberated at the site of infection. These later converted into macrophages. 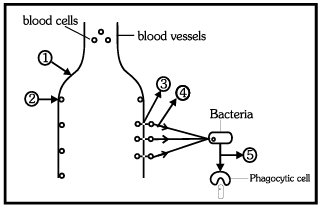 (i) Vasodilation : At site of entry - Increased diameter of blood vessels.

(ii) Adhesion : Accumulation of leucocytes at periphery of blood vessels due to decreased blood flow.

(iii) Diapedesis : Now the leucocytes (neutrophils or Monocytes) migrates from the blood vessel by Active movements (Amoeboid movement) into the E.C.F. This kind of active movement of cell, is called diapedesis. (a) Attachment (adherence) : The infective agent gets attracted to the membrane of the phagocyte.

(b) Ingestion : Phagocyte engulfs the particular material into a vacuole (phagosome). The membrane of which fuses with a lysosome forming a phagolysosome. Lysosome contains hydrolytic enzymes and other bactericidal substances.

(c) Intracellular killing of bacterium : Most bacteria are slaughtered in the phagolysosome by the hydrolytic enzymes within a few minutes of phagocytosis.

(D) Inflammatory Barrier : Inflammation : Local response of living mammalian tissue to injury due to any agent. It is the body defence reaction in order to eliminate or limit the spread of infectious agent.

Inflammation is manifested as pain, swelling, redness, and increased temperature in the local area.

Inflammatory response occurs due to :- Release of histamines and prostaglandins from damaged mast cells. At the site of entry of pathogen, there is redness (due to vasodilation) and swelling of skin due to accumulation of fluids and High temp. (due to­ B.M.R.) and pain(due to secretion of allergic susbtances like histamine and prostaglandin (PGs) from the damaged cells and PGs stimulate the pain receptors.

NK-Cell :It is a large granular lymphocyte cell.

During this process apart from the phagocytes, another type of cells called Natural killer cells kill virus infected cells and tumour cells of body by creating perforin lined pores in the plasma membrane of target cells (i.e. infected cells). Water enters through these pores causing swelling and bursting of the diseased cells.

It is formed by complementary component or C-component and they are inactive but when agglutination occurs in our body they become active and show inflammation, cell lysis and promote phagocytosis. Complement system takes part in both innate and acquired immunity.

Acquired Immunity : It is the resistance that an individual acquires during life. This is generated in response to an exposure to the micro-organism in question.

This immunity is acquired after birth through experience.

This immunity recognizes and selectively eliminates the pathogen. (i) Specificity : Acquried immunity is specific for specific micro-organisms.

(ii) Diversity : This system recognizes the vast variety of micro-organisms.

(iii) Discrimination between self and non-self. It can recognize self (body or tissue) and non self (foreign tissue) and respond according to them.

(iv) Memory : When a pathogen enters inside the body, body takes longer time to recognize and respond to it. This is called primary immune response but the memory of this encounter remains in immune system.

(i) Active acquired immunity :- Resistance developed by an individual as a result an antigenic stimulus.

(a) Natural :- Results from a clinical or inapparents infection by a microorganism.

(b) Artificial :- Resistances induced by vaccine

Vaccines :-Preparation of live or killed microorganism or their products used for immunization.

(ii) Passive Immunity :- It is received passively by host without participation or contribution from host's immune system. Immunological memory is absent here and the readymade antibodies are given in immuno suppressive individual. This is called passive immunity.

(b) Artificial :- Resistance passively transferred to a recipient by administration of antibodies.

Difference between active and passive immunity

Active Immunity : This immunity develops after infection or vaccination.

Active immunity is formed by lymphocytes, lymphocytes are produce in bone marrow (Haematopoisis).

After production some of lymphocytes migrates from bone marrow to thymus cells and mature as T-cells (Thymus cell).

Lymphocyte which remain in bone marrow mature as B - cells (Bone marrow cells) so, bone marrow and thymus gland are primary lymphoid organ.

After maturation some lymphocytes migrate from bone marrow & thymus gland to the spleen & lymph nodes like tonsils, and proliferate (­

Based on these two type of lymphocytes there are two types of active immune system.

(iv) Memory T-cell When pathogens enter inside the body first macrophage interact with them and activates TH-cell by releasing cytokines or ILs or monokines.

(i) Helper T-cell → This activated helper cell stimulates the killer T-cell and B-cell and these killer & B-cell start dividing and produce clone (group of similar cells) this phenomenon is called clonal selection.

They produce lymphokines (messenger molecules) which cause accumulating of WBCs to the affected site.

(ii) Killer T-cell : These cell or clone of these cell destroy the infected cells or target cell and kill the pathogen and also the cancerous cells by secreting Lymphotoxic substances and secrete lymphokines which attracts phagocytes.

These are responsible for cell–mediated immunity. They also destroy transplanted, tumour cells and other foreign cells.

(iii) Suppressor Cells (TS) :- These suppress the functions of TC and TH cells. B–cells and plasma cells are also affected by TS cells by synthesizing suppressor factors and suppress the entire immune system for attacking the own body

(iv) Memory T-cell : They don't kill the pathogen or don't form the antibodies but these cell retain the memory of every encounter.

They convert into effector cells (TC) on later encounter with specific antigen even after several years.

(v) Antigen Presenting Cells :- In immune mechanism every antigen molecule is processed  by antigen presenting cells like macrophages, B-lymphocytes etc. This processed antigen is presented on the surface of these cells.

When a T- helper lymphocyte passes closely by the side of the antigen presenting a cell bearing the antigen on its surface, it recognizes the antigen and becomes activated. Now T-helper cells activate the B-cells and T-killer cells.

These cells in turn develop clones by frequent divisions in themselves.

Antibody or Immunoglobulin : These are complex glycoprotein molecule made up of 4 polypeptide chains - two light and two heavy chains.

These two chains are held together by disulphide bond in shape of Y molecule.

Two top tips of this molecule bind with antigen [large and complex foreign molecules mainly proteins that activate the specific immunity] like lock and key fashion and make antigen-antibody complex.

(i) Agglutination : Antibody attach with the antigen which is present on the surface of pathogen and destroy the pathogen by cell lysis.

(ii) Opsonisation : Coating of bacteria (Ag) with opsonin Antibody (IgG and IgM) facilitates the phagocyte cells and these antibodies or opsonin promote phagocytosis by combination with antigen.

(iii) Neutralization : Antibodies neutralize the toxin of bacteria by attaching with them.

Various Types of Immunoglobulins in Human