The document Impact of Government Spending on Economic Growth - Macroeconomics Notes | Study Macro Economics - B Com is a part of the B Com Course Macro Economics.
All you need of B Com at this link: B Com

How does Government Spending Affect the Economy?

Key roles of the government

Government has a huge role to play in the economy. Some of its key roles are as follows:

Any economy facing political or economic turmoil is not conducive to economic growth since it has very little trust in the economy. Moreover, there is uncertainty in the economy and people are also unwilling to invest.

Government needs to make sure that there is a stable political environment. It’s very important on the part of the government to provide good legal and political framework.

There should be certain regulations to ensure that the economy does not drift to the monopolistic situation.

Government needs to think about trade policies with foreign countries, regulation on natural resources available in our country etc.

3. Stimulate the economy by increasing the government spending

This was one of the philosophies given by one of the renowned economist John Maynard Keynes. He was of the view that government’s role is very important when the economy is in recession or depression like situation and the government should increase spending to have pickup in the economic activity.

Before understanding how does government spending affect the economy, let’s first understand how government earns and spent its money. 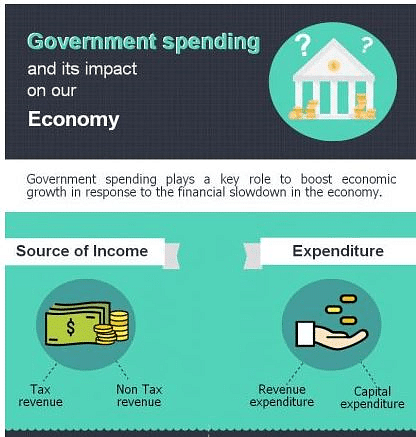 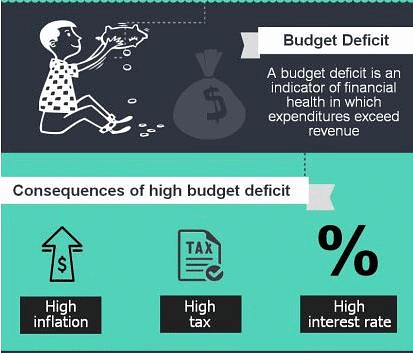 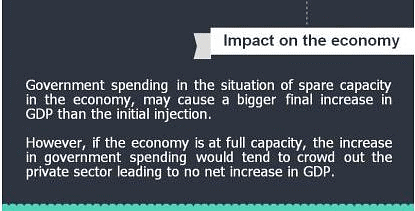 Source of income: The main sources of income for the government are tax and non-tax revenue. Taxes include Income tax, corporation tax and indirect taxes while the non-tax revenue comes from public sector units like income from railways or Public sector banks etc.

Now since we are aware of the source of income and expenditure of the government, let’s understand about the deficit.

The government tries to fulfill this gap through borrowing which it does so by issuing bonds or borrowing from the foreign government.

India recorded a Government Budget deficit equal to 3.90 percent of the country’s Gross Domestic Product in 2015.

Keynesian theory suggested that government spending program is just to provide a short-term boost to help overcome a recession or depression like situation in the economy. They even suggested that policymakers should be ready to reduce government spending once the economy is recovered so as to prevent Inflation, which they believed would result from too much economic growth.

However, if deficit is out of control can pose a problem for the economy. Our Indian economy  is mostly in deficit and in some years it becomes uncomfortably high. Some of the consequences of high fiscal deficit are as follows-

3. High taxes in some cases

Impact of government spending on the economy

There is a high possibility that the rise in taxes will negate the impact of rising government spending which would leave Aggregate Demand (AD) unchanged. However, it is possible that increased spending and rise in tax could lead to an increase in GDP.

Some economists would argue increasing government spending through higher taxes would lead to a more inefficient allocation of resources as governments tend to be less effective in spending money.

Fiscal multiplier is often seen as a way that spending can boost growth in the economy. This multiplier state that with the increase in the government spending leads to increase in some measure of economic wide output such as GDP.

As per the multiplier theory, an initial amount of government spending flows through the economy and is re-spent over and over again which leads to the development of the overall economy. A multiplier of 1 implies that if the government created a project that takes 100 people, it would put exactly 100 (i.e. 100 x 1.0) people in the workforce. A multiplier greater than 1 suggests more employment, and a number less than 1 means a net job loss. However, government spending may sometime decrease economic growth, possibly due to inefficient use of money.

Government spending, even in a time of crisis in the economy, may not work as an automatic boon for economy’s growth. Empirical evidence suggests that in practice, government outlays designed to stimulate the economy may fall short of that goal. So before it approves any additional spending to boost growth, the government should have an understanding whether such spending is likely to stimulate growth and report how much uncertainty surrounds those estimates. Moreover, this analysis should be opened to the public for comment prior to it is applied in the system.

The document Impact of Government Spending on Economic Growth - Macroeconomics Notes | Study Macro Economics - B Com is a part of the B Com Course Macro Economics.
All you need of B Com at this link: B Com