Wheat: Ranking after rice in terms of both area (nearly 1/10th of total cropped area) and production, it is grown mainly in the great plains during cool season.

Jowar: This crop requires moderate rainfall of 30-100 cm and high temperature 20° to 32°C. Excessive moisture and prolonged droughts are harmful.

Bajra: Used as staple food; plant stalks are fed to cattle or used for thatching purposes. It is grown under warm and dry climatic conditions.

Maize: Introduced in India in the 17th century from America, it is an important  food crop and also fodder for the cattle.

Sugarcane: India has the world’s largest area under sugar-cane. This is a long maturing crop sown usually between February and April.

Cotton: Cotton fibre is obtained from the fruit balls of the plant. India ranks second after U.S.A. in areas under cotton.

Jute: Jute fibre is obtained from the stalk or stem of the plant. Jute needs a warm humid climate.

Tobacco: Introduced in India by the Portuguese in 1508, major producers of the plant now are Andhra Pradesh, Maharashtra, Bihar, Karnataka, Uttar Pradesh and Tamil Nadu.

Tea: India is the world’s largest producer, consumer and exporter of black tea. 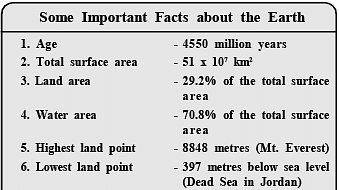 Coconut: India has the third largest area under coconut in the world after Philippines and Indonesia.

Rubber: Rubber requires high temperatures of around 35°C and more than 200 cm of rainfall.

Spices: There are a variety of spices in India.