The document Important Definitions & Formulas: Pair of Linear Equations in Two Variables Class 10 Notes | EduRev is a part of the Class 10 Course Mathematics (Maths) Class 10.
All you need of Class 10 at this link: Class 10

An equation is a mathematical statement that two mathematical expressions having one or more variables are equal.

The word 'Linear' means single degree equation i.e. the maximum powers of all the variables involved are one. The word 'Two Variables' means that the mathematical statement will be having two variables i.e. two mathematically unknown quantities.

The general form of a linear equation in two variables is ax+by+c=0, where a and b cannot be zero simultaneously. 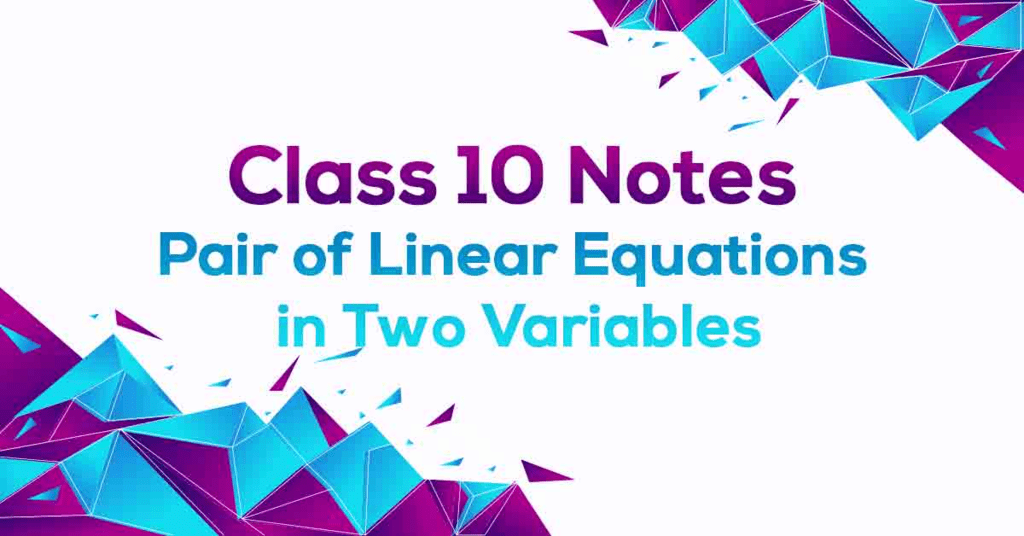 Solution of Pair of Linear Equations in Two Variables

1. Graphical Method for Solving a Pair of Linear Equations in Two Variables

2. Algebraic Methods for Solving a Pair of Linear Equations in Two Variables

We have three algebraic methods of solution for a pair of linear equations in two variables:

Step 1: Find the value of one variable, say y in terms of the other variable, i.e., x from either equation, whichever is convenient

Step 2: Substitute this value of y in the other equation, and reduce it to an equation in one variable, i.e., in terms of x, which can be solved. Sometimes, you will get statements with no variables. If this statement is true, you can conclude that the pair of equations has infinitely many solutions. If the statement is false, then the pair of linear equations is inconsistent.

(b) Elimination Method or Method of Elimination by Equating the CoefficientsStep 1: First, multiply both the equations by some suitable non-zero constants to make the coefficients of one variable (either x or y) numerically equal.

Step 2: Then add or subtract one equation from the other so that one variable gets eliminated. After you get an equation in one variable, go to step 3.

If in Step 2, you obtain a true statement involving no variable, then the original pair of equations has infinitely many solutions.

If in Step 2, you obtain a false statement involving no variable, then the original pair of equations has no solution, i.e., it is inconsistent.

Step 3: Solve the equation in one variable(x or y) so obtained to get its value.

Step 4: Substitute this value of x ( or y) in either of the original equations to get the value of the other variable.

(c) Cross-Multiplication Method Step 1: Write both of the given equations with their variables and constant term to the left-hand side.Step 2: Write the coefficients of x,y and the constant term as:

NOTE: These equations are also known as coincident lines or dependent lines.

Equations Reducible to a Pair of Linear Equations in Two Variables

There are several situations that can be mathematically represented by two equations that are not linear but can be reduced to linear by making certain suitable substitutions.

Read the statement carefully and identify the unknown quantities. Represent the unknown quantity by x, y, z, a, b, c, etc. Formulate the equations in terms of the variables to be determined and solve the equations to get the values of the required variables. Finally, verify with the conditions of the original problem. The problems are stated in words, for this reason, often refers to word problems.