The document Important Formulae: Set Theory CAT Notes | EduRev is a part of the Quant Course Quantitative Aptitude (Quant).
All you need of Quant at this link: Quant

The number of elements in a set is called its cardinal number and is written as n(A). A set with cardinal number 0 is called a null set while that with cardinal number ∞ is called an infinite set.Set A is said to be a subset of Set B if each and every element of Set A is also contained in Set B. Set A is said to be a proper subset of Set B if Set B has at least one element that is not contained in Set A. A set with ‘n’ elements will have 2n subsets (2n – 1 proper subsets)The Universal set is defined as the set of all possible objects under consideration.

Venn Diagram: A venn diagram is used to visually represent the relationship between various sets. What do each of the areas in the figure represent? 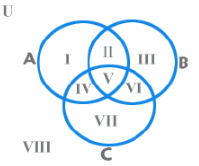 For some basic values: