Q-1 What is the basic unit of residence?Ans- The basic unit of residence is a house.Q-2 What is a mega city?Ans- The city having population over 5 million is called mega city.Q-3 Which area is known as Ruhr basing India?Ans – The region covering southern west Bengal , adjoin Jharkhand and northern Orissa is known as Ruhr basin of India .Q.4 What are the statuary towns?Ans- All places which have municipal corporation, cantonment board or a notified town area committee are called statuary town.Q.5 What is meant by settlement?Ans. Settlement: Settlement means cluster of dwellings of any type or size where humans live. However in geography settlement is also considered as a process of coming together to live in an area or locality. This process of phenomenon is also called occupancies.Q.6 The house in its design of internal plan reflects the social and cultural values of our people. Elaborate with the help of suitable example.Ans. The house is the basic unit of residence of design and layout. The internal structures of the houses is according to the life style and economic house types and their building material, show regional distinction and local influences.i) the distinguished features of the Indian houses is the courtyard(Angan). It is used for the family performance.(ii) In the southern India, a house has more than one courtyards. This has the influence of their temples.(iii) In the fishing villages of Kerala, the courtyard is often open ended.(iv) In the cold and wet highlands, on over hanging verandah is found.Q.7 What are squatter settlements and slums? Describe three main characteristics of squatter settlements?Ans. Squatter settlements: it is a residential area in an urban locality inhabited by the very poor who have no access to tenured land of their own and hence squat on vacant land either private or public. Characteristics:(i) These are dense proliferation of small makeshift shelter built from diverse material.(ii) Their status is non – legalm they lack land ownership.(iii) They are known by several local names such as Ramchos in Venezuela. Favelas in Brazil.Slums: Slums are residential areas that are physically and socially deteriorated and in which satisfactory family life is impossible.Q.8 Distinguish between Rural and Urban settlements.Ans. Rural and Urban Settlements: 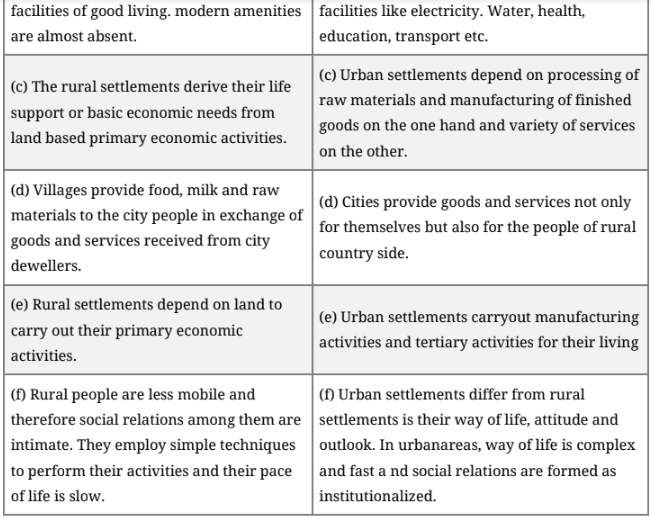 Q-11 What do you mean by slums?
Ans. Slums are those settlements where lack of basic requirements of living are not available.

Q- 13 What is global city? Name any two global cities.
Ans. The cities or metropolies cities which are developed as international financial market and which are gradually becoming the hub of global economy is called a global city.

Q-14 Distinguish between compact and dispersed settlements.
Ans - Compact settlements: -
- These settlements develop generally in the fertile plains and valleys.
- Agriculture is the main occupation of people.
- The houses are compact and Congested with narrow streets.
- The size of farms are generally small and nearly the settlements.
- The water discharged system is not found adequate resultant streets are found dirty.
Dispersed Settlements –
- These settlements developed in highlands, chilly areas and semi-arid areas.
- The density of population is not high due to barron land
- The houses are dispersed and scattered over a wide area
- Population live in isolated places
- The size of such settlements is not large
- Fishing, Cattle rearing etc. are the activities of the people.

Q-16 Discuss the criteria used by different countries for designating settlement as urban.
Ans - Some of the criteria used by different countries for designating urban are:-
(i) Size of population – It is a criterion which has been adopted by sensus department of determine a settlement as urban. The census department of different countries have taken their over criteria of the size of population. For Example- In Denmark & Sweden urban settlements is that where 250 persons are there, But in Canada it is 1000 while in India it is 5000.
(ii) Occupational or functional structure - Urban settlement differ from rural settlement, In Italy a settlement is called an urban if more than 50% of the conomically productive population is engaged in non-agricultural activities. In India an urban population is that where 75% people are engaged in secondary or tertiary activities.
(iii) Admirative decision – It is also an criteria urban centres are generally administered by municipality or corporation. In several cities of latin America such as Brazil the administration centre is called urban irrespective of its size. In India a settlement big than 5000 population can became an urban center.
(iv) Location size and situation.