Q-1 What is a trans-continental railways?Ans. Transcontinental railways run across the continent and link its two ends. i.e Trans Saibarian Railway.Q-2 What do you mean by technological park?Ans. Technological clustering of knowledge based activities which are oriented with science and technology i.e. software and micro electronics industries.Q-3 Which is an important inland waterway in north America ? Write two main features of this inland waterway .Ans. The great lakes –St. lawrance waterways is an important inland waterway in North America.Q-4 Which major ports are linked by the north pacific ocean route ?Ans. North pacific oceanic route joins vancauvar ,san francisco,Portland at the west of North America and Yakohama,Kobe,Shanghai,Manila in Asia.Q-5 What is internet ?Ans. Internet is the world wide web means the electronic digital word for communicating or accessing information over computer networks without physical movement of the sender and the receiver.Q-6 Which is the famous pipeline of U.S.A. state one advantage of pipeline transportation.Ans. Big –Inch is the famous pipeline of U.S.A.Q-7 Distinguish between transport and communication.Ans - Transport –The transport of men and goods from one place to another.Ex: Railway, air routes, waterways.Primitive method – Bullock-cart etc....They move by petrol, diesel or electric power.Communication – They convey our views and news from one place to another.Examples – Post and telegraph and telephone services.No primitive method – Means of transport were the means of communication.- They work by electric waves.Q-8 Study the map given below and answer the question that follow: -1. Name the two ports in the map by No.1 and 22. Name the two seas connected by the canal shown in the map.3. Name the lakes shown by A and C. 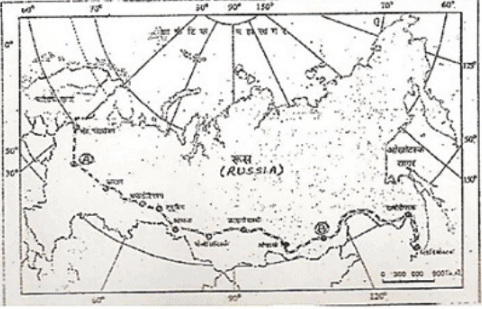