There was a definite hierarchy in the caste system which means society was divided into different segments on the basis of their higher or lower status. Brahmins were given a higher status in all parts of India. Kshatriyas were in second place and the third place was of Vaishyas. Fourth and the last place in the society was given to the lower castes. The social status of any person in society was determined on the basis of this hierarchy. Brahmins were given the highest respect.

Q.30. Restrictions regarding castes. Explain.OrWhat was the restriction related to caste?

There were some rules in every caste regarding restrictions on certain points like:

Caste System gave rise to untouchability. The so-called upper caste of the society considered the lower caste as inferior. They were kept away from society. They were not allowed to touch anyone. This restriction was known as untouchability. People of lower castes were supposed to live out of the village or the city. This created inequality in society.

Q.32. What are the merits of the caste-system?

Q.33. How has the caste system affected our society?

Q.34. Give four characteristics of a Family.

Q.35. Explain the types of the family on the basis of residence.

Three types of families are there on the basis of residence:

Q.36. What is the importance of the kinship system?

Q.37. Explain the role of the caste system in the modern age.

Today, we can clearly say that the caste system has been weakened to a great extent. Now, it hardly matters as to which group a person belongs to. The structural aspect of the caste system has also been weakened. Caste discrimination, religious disabilities, restrictions on social intercourse are no more a part of society. Now caste has no direct relation with one’s occupation.Jajmani’s system of villages is also weakening. The majority groups have dominance in villages instead of caste groups. Yet some impact of the caste system can be seen at the time of marriage but its rigid aspect is no more seen. It has been greatly influenced by a number of processes like industrialization, urbanization, Sanskritization, westernization, etc.

Q.38. What do you know about categories of kinship?

Three types of categories of Kinship are there on the basis of closeness and these are:

Indian society was divided into many segments within the caste system but broadly it was divided into four segments. Brahmins belonged to the first segment, then Kashatriyas, then Vaishyas and at the end, the Shudras or the lower castes were there. The status, place, and functions of the members of every segment were pre-determined. Every caste had its own rituals, customs, traditions, values, etc. That is why the scope of relations of members of every caste was generally limited to its own social division. Every caste was the social unit in itself to which a person belonged.

Q.41. Give differences between caste and class as a form of social stratification. 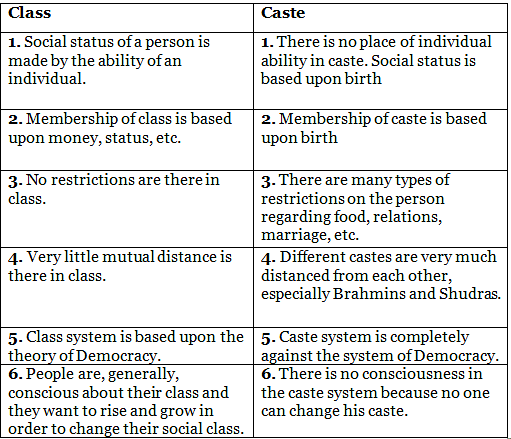 Q.43. What are the demerits of the caste system?

Q.44. How has industrialization affected the caste system?

Q.45. What are the main functions of a family?

(d) Giving religious education to its members.(e) Political functions: Educating the members about their rights and duties.

Q.46. How many types of kinship are there?

Two types of kinship are there:

A tribe is a group of people who lives away from our civilization on mountains, forests, and valleys traditionally. The society which exists in these tribes is known as tribal society. A tribal society is a classless society in which there is no division of any type. Most of the population of tribal society lives either on mountains or in forests. These societies are generally self-dependent, who have control over themselves and they can independently survive on then own. They live in communities, quite segregated from society. Tribal society is completely different from rural and urban society from the point of view of social structure and culture.

Q.48. What do you know about the concept of Tribal Identity’?

The meaning of Tribal Identity is to preserve the social and cultural heritage of tribes so that the existence of their culture should not come to an end after they come in contact with other cultures. These days tribes are feeling that they are being marginalized and that is why the concept of tribal identity came in front.In tribal societies, people are converting their religion, forgetting about their culture, and want to become modern because of the impact of Christian missionaries and the spread of education. It is harming their basic culture. That is why the sense of tribal identity came forward so that their specific culture, religion, language, etc. could be preserved.

It is true that changes in social structure lead to changes in family structure. For example, the Indian social structure was based on rural values. During colonial rule, industries established in India and rural society started to change into an industrial society. Rural people started working in industries.That is why they started to migrate towards urban areas by leaving rural areas. In this way, the joint families existing in rural areas started disintegrating. People started to migrate toward urban areas and they took their wives and children with them. It led to the disintegration of joint families and to the advent of nuclear families.