Suppose now that we consider the general motion of the system in Fig. 2–1, i.e., we consider motion to a general force F(t). Then, recalling the result from earlier, the differential equation of motion is given as

Now suppose that F(t) is the following function: F(t) =

where δ(t) is defined as follows:

where f (t) is an arbitrary function. For simplicity, consider the case where Fˆ = 1, i.e., the case of unit impulse being applied to the system. Also, let g(t) be the response to the input δ(t), i.e., consider the system

Now we have the following

Taking the limit as T → 0 from above, we obtain

Furthermore, because the position of the mass cannot change during the application of an instantaneous impulse, we see that

It is seen that, for the case where

is the natural frequency, ζ is the damping ratio, and ωd = ωn

is the damped natural frequency. Differentiating this last equation, we have

Therefore, the response of the system to a unit impulse at t = 0 is given as 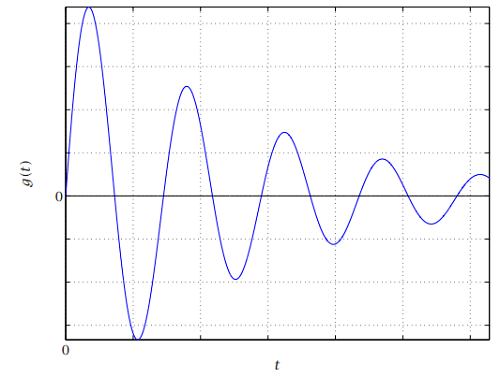