Classification Based on Grain SizeThe range of particle sizes encountered in soils is very large: from boulders with dimension of over 300 mm down to clay particles that are less than 0.002 mm. Some clays contain particles less than 0.001 mm in size which behave as colloids, i.e. do not settle in water.

In the Indian Standard Soil Classification System (ISSCS), soils are classified into groups according to size, and the groups are further divided into coarse, medium and fine sub-groups.

The grain-size range is used as the basis for grouping soil particles into boulder, cobble, gravel, sand, silt or clay.

Coarse-grained soils are those for which more than 50% of the soil material by weight has particle sizes greater than 0.075 mm. They are basically divided into either gravels (G) or sands (S).According to gradation, they are further grouped as well-graded (W) or poorly graded (P). If fine soils are present, they are grouped as containing silt fines (M) or as containing clay fines (C).

For example, the combined symbol SW refers to well-graded sand with no fines.

Both the position and the shape of the grading curve for a soil can aid in establishing its identity and description. Some typical grading curves are shown.

Curve A - a poorly-graded medium SAND Curve B - a well-graded GRAVEL-SAND (i.e. having equal amounts of gravel and sand) Curve C - a gap-graded COBBLES-SAND Curve D - a sandy SILT Curve E - a silty CLAY (i.e. having little amount of sand)

Fine-grained soils are those for which more than 50% of the material has particle sizes less than 0.075 mm. Clay particles have a flaky shape to which water adheres, thus imparting the property of plasticity.

A plasticity chart , based on the values of liquid limit (WL) and plasticity index (IP), is provided in ISSCS to aid classification. The 'A' line in this chart is expressed as IP = 0.73 (WL - 20).

Depending on the point in the chart, fine soils are divided into clays (C), silts (M), or organic soils (O). The organic content is expressed as a percentage of the mass of organic matter in a given mass of soil to the mass of the dry soil solids.Three divisions of plasticity are also defined as follows.

The 'A' line and vertical lines at WL equal to 35% and 50% separate the soils into various classes.

For example, the combined symbol CH refers to clay of high plasticity. 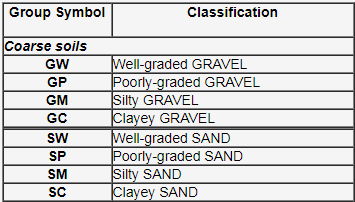 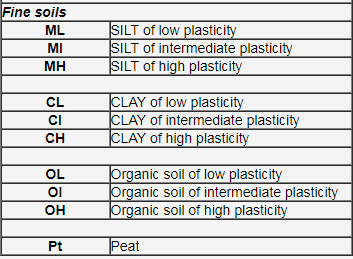 Activity"Clayey soils" necessarily do not consist of 100% clay size particles. The proportion of clay mineral flakes (< 0.002 mm size) in a fine soil increases its tendency to swell and shrink with changes in water content. This is called the activity of the clayey soil, and it represents the degree of plasticity related to the clay content.

Classification as per activity is: 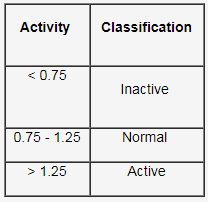 Liquidity IndexIn fine soils, especially with clay size content, the existing state is dependent on the current water content (w) with respect to the consistency limits (or Atterberg limits). The liquidity index (LI) provides a quantitative measure of the present state.

Classification as per liquidity index is: 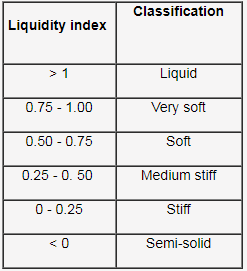 Visual ClassificationSoils possess a number of physical characteristics which can be used as aids to identification in the field. A handful of soil rubbed through the fingers can yield the following:

Classify the soil, and determine its activity and liquidity index Solution:Plasticity index, IP = WL– WP = 48 – 26 = 22%Liquid limit lies between 35% and 50%.According to the Plasticity Chart, the soil is classified as CI, i.e. clay of intermediate plasticity.

The clay is of normal activity and is of soft consistency.