Generally, electric power is transmitted through the transmission line with AC high voltage and current. High valued alternating current while flowing through the conductor sets up magnetic flux of high strength with alternating nature. This high valued alternating magnetic flux makes a linkage with other adjacent conductors parallel to the main conductor. Flux linkage in a conductor happens internally and externally. Internally flux linkage is due to self-current and externally flux linkage due to external flux. Now the term inductance is closely related to the flux linkage, denoted by λ. Suppose a coil with N number of turn is linked by flux Φ due to current I, then,

Calculation of Inductance of Single Conductor 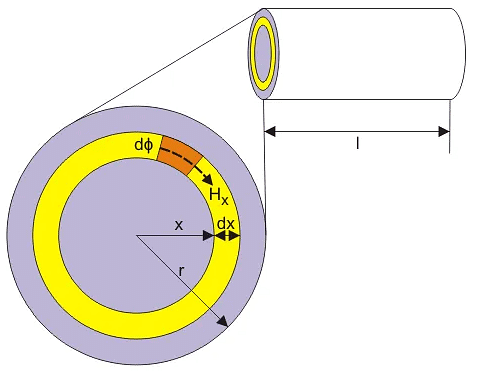 Now consider small thickness dx with the 1m length of the conductor, where Hx is the magnetizing force due to current Ix around the area πx2.

dφ for small strip dx is expressed by

Now, the total flux linkage for the conductor of 1m length with radius r is given by

Hence, the internal inductance is

External Inductance due to External Magnetic Flux of a Conductor

Let us assume magnetic flux dφ is present within the thickness dy from D1 to D2 for 1 m length of the conductor as per the figure.

As the total current I is assumed to flow in the surface of the conductor, so the flux linkage dλ is equal to dφ.

But we have to consider the flux linkage from conductor surface to any external distance, i.e. r to D

Suppose conductor A of radius rA carries a current of IA in opposite direction of current IB through the conductor B of radius rB. Conductor A is at a distance D from conductor B and both are of length l. They are in close vicinity with each other so that flux linkage takes place in both of the conductors due to their electromagnetic effects.

Let us consider the magnitude of current in both conductors are same and hence IA = – IB, 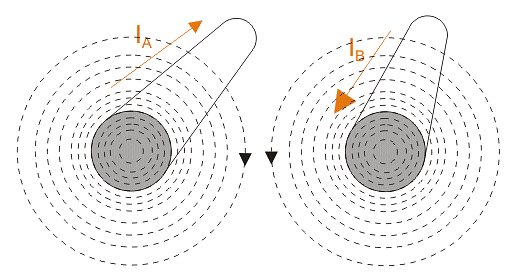 If we consider that both conductor are with same radius, i.e. rA = rB = r and point P is shifted to infinite distance then we can write that

If conductor A becomes bundled conductor, then its geometrical mean radius (GMR) will be calculated for n number of conductors per bundle.

Where, d is the distance between the central axis of conductors within the bundle.

In the three phase transmission line, three conductors are parallel to each other. The direction of the current is same through each of the conductors.

When they carry the current of the same magnitude “I”, they are in flux linkage with each other. 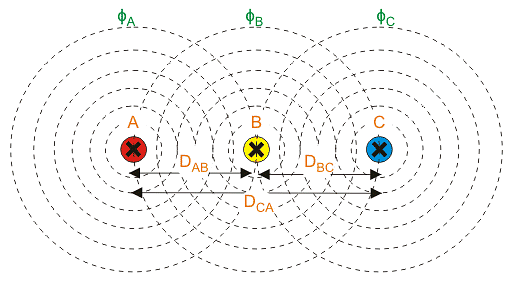 Now, let us consider a point P near three conductors. So, flux linkage at point P due to current through conductor A is,

Therefore, flux linkage at point P for conductor A,

in balanced system, then we can write that

If we arrange them in matrix form, then we get

Where, λA, λB, λC are the total flux linkages of conductor A, B and C.

LAA, LBB and LCC are the self inductances of conductor A, B and C.

LAB, LAC, LBC, LBA, LCA, LCB are the mutual inductances of between conductors A, B and C.

In balanced system, then we can write that

So, inductance per meter per phase,