The document Insolation & Heat budget of the Earth UPSC Notes | EduRev is a part of the UPSC Course Geography for UPSC CSE.
All you need of UPSC at this link: UPSC

The insolation entrance into the upper atmosphere is just the beginning of a complex series of events in the atmosphere and at Earth’s surface. 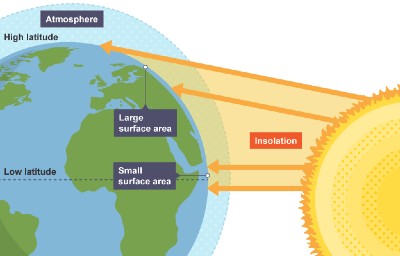 Several processes deplete the solar radiation as it passes through the earth’s atmosphere like:

(Radiation intensity is commonly described in W/m2 — the amount of energy emitted or received in a given period of time in a given area.)

Absorption: Electromagnetic waves striking an object may be assimilated by that object—this process is called absorption. Different materials have different absorptive capabilities, with the variations depending on the wavelength of radiation involved.

Transmission: Some radiation passes through the atmosphere without reflection, refraction, absorption, or scattering. This is called transmission.

Conduction: The transfer of heat from one molecule to another without changes in their relative positions is called conduction. This process enables energy to be transferred from one part of a stationary body to another or from one object to a second object when the two are in contact.

Convection: In the process of convection, energy is transferred from one point to another by the predominately vertical circulation of a fluid, such as air or water. Convection involves movement of the warmed molecules from one place to another.

The expansion in rising air is a cooling process even though no energy is lost. As air rises and expands, the molecules spread through a greater volume of space—the “work” done by the molecules during expansion reduces their average kinetic energy, so the temperature decreases. This is called adiabatic cooling—cooling by expansion (adiabatic means without the gain or loss of energy). In the atmosphere, any time air rises, it cools adiabatically.

Conversely, when air descends, it becomes warmer. The descent causes compression as the air comes under increasing pressure the work done on the molecules by compression increases their average kinetic energy.

The temperature increases even though no energy was added from external sources. This is called adiabatic warming—warming by compression. In the atmosphere, any time air descends, it warms adiabatically. Adiabatic cooling of rising air is one of the most important processes involved in cloud development and precipitation, whereas the adiabatic warming of descending air has just the opposite effect.

Latent Heat: The physical state of water in the atmosphere frequently changes—ice changes to liquid water, liquid water changes to water vapour, and so forth. Any phase change involves an exchange of energy known as latent heat (latent is from the Latin, “lying hidden”).

Concept of twilight (dawn and dusk)

Twilight is the time between day and night when there is light outside, but the Sun is below the horizon.

The diffused light that occurs before the sunrise and sunset gives valuable working hours for humans. The light scattered by the gas molecules and reflected by water vapour and dust particles cause illumination of the atmosphere. Such effects can be enhanced due to pollution and other suspended particles as those in volcanic eruptions and forest fires.

In the morning, twilight begins with the dawn, while in the evening it ends with dusk. Several atmospheric phenomena and colours can be seen during twilight. Astronomers define the three stages of twilight – civil, nautical, and astronomical – based on the Sun’s elevation, which is the angle that the geometric center of the Sun makes with the horizon.