If this line passes through the point of intersection of the nearest directrix and the x-axis, then the eccentricity of the hyperbola is (2010)

2. Consider the parabola y2 = 8x . Let Δ1 be the area of the triangle formed by the end points of its latus rectum and the point

on the parabola and Δ2 be the area of the triangle formed by drawing tangents at P and at the end points of the latus rectum. Then 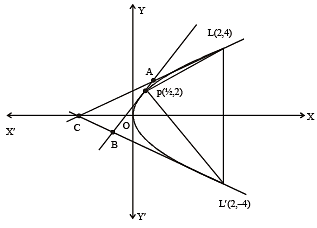 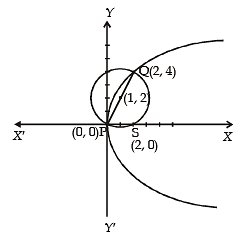 4. A vertical line passing through the point (h, 0) intersects the ellipse

at the points P and Q. Let the tangents to the ellipse at P and Q meet at the point R. If Δ(h) = area of the triangle

By symmetry, tangents at P and Q will meet each other at x-axis. 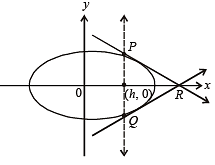 Tangent at P is

which meets x-axis at

∴ Δ(h) is a decreasing function.

7. Suppose that the foci of the ellipse