Q.1. A steady current I goes through a wire loop PQR having shape of a right angle triangle with PQ = 3x, PR = 4x and QR = 5x. If the magnitude of the magnetic field at P due to this loop is

find the value of k.

The right angled triangle is shown in the figure. Let us drop a perpendicular from P on QR which cuts QR at M.

The magnatic field due to currents in PQ and RP at P is zero.

The magnetic field due to current in QR at P is 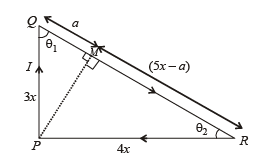 Comparing it with B =

Solution. Let us consider an amperian loop ABCD which is a rectangle as shown in the figure. Applying ampere’s circuital law we get

(current passing through the loop)

The magnetic moment of the loop = (current in the loop) × πr2

Comparing it with the expression given in the question we get

Q.3.A cylindrical cavity of diameter a exists inside a cylinder of diameter 2a as shown in the figure. Both the cylinder and the cavity are infinity long. A uniform current density J flows along the length. If the magnitude of the magnetic field at the point P is given by

then the value of N is

Let us consider the cavity to have current I' flowing in both the directions.

∴ The net magnetic field is

Q.4. Two parallel wires in the plane of the paper are distance X0 apart. A point charge is moving with speed u between the wires in the same plane at a distance X1 from one of the wires. When the wires carry current of magnitude I in the same direction, the radius of curvature of the path of the point charge is R1. In contrast, if the currents I in the two wires have directions opposite to each other, the radius of curvature of the path is R2. If