The document Integer Type ques of Carbohydrates, Amino Acids, Polymers & Miscellaneous Match the Following, Past JEE Notes | EduRev is a part of the JEE Course Class 12 Chemistry 35 Years JEE Mains &Advance Past yr Paper.
All you need of JEE at this link: JEE

Sol. The basic groups in the given form of lysine is NH2

Q.2. A decapeptide (Mol. wt. 796) on complete hydrolysis gives glycine (Mol. wt. 75), alanine and phenylalanine. Glycine contributes 47.0% to the total weight of the hydrolysed products. The number of glycine units present in the decapeptide is (2011) Thus, total number of stereoisomers in pyranose form of  D-configuration = 23 = 8 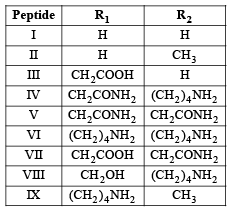 Sol. (4) Peptides with isoelectric point (pI) more than 7, would exist as cation in neutral solution (pH = 7) which means the given polypeptide is of basic nature, so it must contain two or more amino groups. Hence IV, VI, VIII and IX are correct options.

Q.5. A tetrapeptide has —COOH group on alanine. This produces glycine (Gly), valine (Val), phenyl alanine (Phe) and alanine (Ala), on complete hydrolysis. For this tetrapeptide, the number of possible sequences (primary structures) with — NH2 group attached to a chiral center is (JEE Adv. 2013)

Sol. (4) According to question C – Terminal must be alanine and N – Terminal do have chiral carbon means it should not be glycine. So possible sequence is :Val Phe Gly AlaVal Gly Phe AlaPhe Val Gly AlaPhe Gly Val Ala

Q.6. The total number of distinct naturally occurring amino acids obtained by complete acidic hydrolysis of the peptide shown below is (JEE Adv. 2014)

Sol. (1) On hydrolysis, the given peptide gives only one naturally occurring amino acid (glycine).