Divergence Theorem Suppose u(x) is a vector field defined on some convex three dimensional region, R in physical space with volume v and on a closed surface a bounding this volume and u(x) is continuous in R and continuously differentiable in the interior of R. Then,

where, n is the outward unit normal field acting along the surface a, dv and da are infinitesimal volume and surface element, respectively. Proof of this theorem is beyond the scope of these notes.Using (2.262) the following identities can be established: 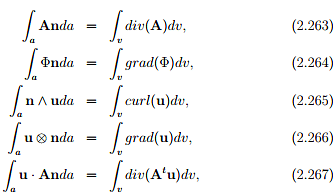 where Φ, u, A are continuously differentiable scalar, vector and tensor fields defined in v and continuous in v and n is the outward unit normal field acting along the surface a.Stokes theorem Stokes theorem relates a surface integral, which is valid over any open surface a, to a line integral around the bounding single simple closed curve c in three dimensional space. Let dx denote the tangent vector to the curve, c and n 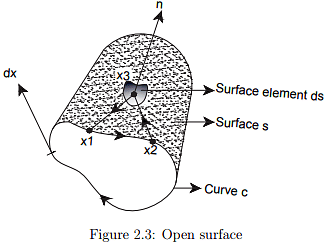 denote the outward unit vector field n normal to s. The curve c has positive orientation relative to n in the sense shown in figure 2.3. The indicated circuit with the adjacent points 1, 2, 3 (1, 2 on curve c and 3 an interior point of the surface s) induced by the orientation of c is related to the direction of n (i.e., a unit vector normal to s at point 3) by right-hand screw rule. For a continuously differentiable vector field u defined on some region containing a, we have

Let Φ and u be continuously differentiable scalar and vector fields defined on a and c and n is the outward drawn normal to a. Then, the following can be show :

where ny is the component of the unit normal along the e2 direction. Similarly, applying Stoke’s theorem (2.268) to a vector field,

where nz is the component of the normal to the curve along the e3 direction. 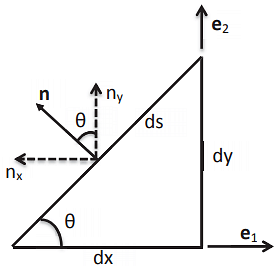 Figure 2.4: Relation between tangent and normal vectors to a curve in xy plane

where niy is the component of the unit normal along the e2 direction of the ith curve.