Due to increase in different species in community, interaction (for food, habitat) also starts between them. 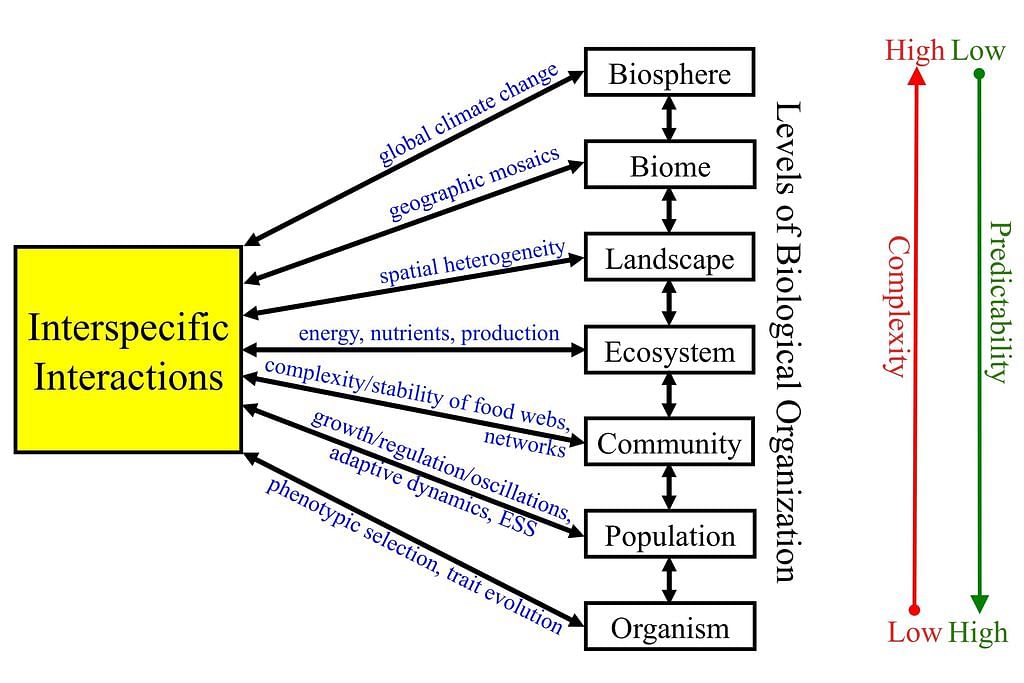 (a) Positive or beneficial interaction – Member of one or both the interacting species are benefitted but neither is harmed.

(b) Negative interaction – One or both interacting species is harmed.

It is a wide spread phenomenon, it includes → mutualism, commensalism, protocooperation.

1. Mutualism (+/+) or Symbiosis :– (co-evolution) Positive inter specific interaction in which members of two different species completely depend on each other for growth and survival, physical contact is present in between both the interacting species. It is obligatory relationship.

In many species of fig trees, there is a tight one to one relationship with the pollinator species of wasp. It means that a given fig species can be pollinated only by its partner wasp species and no other species.The female wasp uses the fruit not only as an oviposition (egg-laying) site but uses the developing seeds with in the fruit for nourishing its larval. The wasp pollinates the fig inflorescence while searching for suitable egg-laying sites. In return for the favour of pollination the fig offers the wasp some of its developing seeds, as food for the developing wasp larvae.

Orchids show diversity of floral patterns, which have evolved to attract the right pollinator insect (bees and bumblebees) and ensure guaranteed pollination by it.The mediterranean orchid Ophrys employs "sexual deceit" to get pollination done by a species of bee. One petal of its flower beans resemble to the female of the bee in size, colour and markings. The male bee is attracted to what it perceives as a female, pseudocopulates with the flower and during that process is dusted with pollen from the flower, it transfers pollen to it and thus, pollinates the flower.

2. Commensalism (+ / 0) – Association between members of two species in which one is benefitted while other is almost unaffected.

3. Proto-cooperation (+/+) – Association in which both organisms are benefited but can live separately, it is a facultative or optional or occasional association also called as non-obligatory relationship. e.g.

(1) Exploitation – One species harms the other by making its direct or indirect use of support, shelter or food.

It is of two types:

(a) Parasitism (+ / –) → This association involves individuals of two species of different size in which smaller (Parasite) is benefitted and larger (host) is harmed. The parasite gets nourishment and shelter from host but does not kill the host.

(i) Ectoparasite →  lives on the body of host.

(ii) Endoparasites → lives in the body of host.

(b) Predation (+/–) :– A free living organisms which catches and kills another species for food.

In this interaction one species is inhibited by toxic secretion of another species. Inhibitor species is neither benefitted nor harmed.

(i) Antibiosis – Secretion of antibiotics –

On the basis of position and the degree of protection to perennating organs (bud) during adverse season, Raunkiaer divided the plant in to five life forms (growth process)

1. Phanerophytes – The buds are located much above the surface of the earth.

Such type of plants are found more in tropics, epiphytes are included in phanerophytes.

2. Chamaeophytes – The buds are situated very close/near to the ground surface. Such types of plants are found in cold places or high altitudes.

3. Hemicryptophytes – The buds present just below or just above the surface of ground. Such plants are found in temperate climate.

4. Cryptophytes – The buds lie very deep in the ground.

5. Therophytes – Those plants which are passing the unfavourable climate through their seeds.

SOME TERMINOLOGY RELATED TO COMMUNITY

(1) Formation →  A well developed plant community in any climate is called formation.

(2) Association →   A sub-unit of formation. A smaller community of plant formation with its two or more dominant species is known as association. A formation has many association.

(3) Consociation →  Sub unit of association, means a community with a single dominant species.

METHODS OF STUDY OF PLANT COMMUNITIES

1. Direct Method – This method is used to find out the species and members present in a community and study about them. This method can be used only for small community.

2. Sampling method – In this method we study the community in the form of sample. This method is also useful for large community. Samples are taken in the form of quadrats. The quadrats are formed with the help of rope to know the size of a quadrat, sequentially increase the size of quadrats according to increase in number of species, when the no. of the species becomes constant then estimate the number of plants present in the same size of quadrats. Then after that table work is done.

(i) Frequency →  No. of (Percentage) of samples on sampling unit in which species is present. It indicates species dispersal.

e.g. The plants of prosopis species were present in 90 samples out of 100 sample,

(ii) Density – The number of individuals per unit area, it indicates abundance of a species.

Analysis of community characters is generally done for :-

Community analysis involves measurements of various characters in sample plots or quadrats located with in the community.

Various community characters can be categorised as :

(i) Analytic characters – Characters which are directly observed or measured in sample plots or quadrats.

(ii) Synthetic characters – Which are derived from the measurements of analytic chracters.

The document Population Interactions Notes | Study Biology Class 12 - NEET is a part of the NEET Course Biology Class 12.
All you need of NEET at this link: NEET
Join Course