The actually borrowed money by A is called principal (SUM).

The interest that the borrower has to pay for every 100 rupees borrowed for every year is known as rate percent per annum. It is denoted as R% per annum =

The time for which the borrowed money has been used is called the time. It is denoted as T years.

The Formula of Simple Interest

The interest is directly proportional to the principal, the rate and time for which the borrowed sum is used. If the interest on a certain sum borrowed for a certain period is reckoned uniformly, then it is called Simple Interest and denoted as S.I. 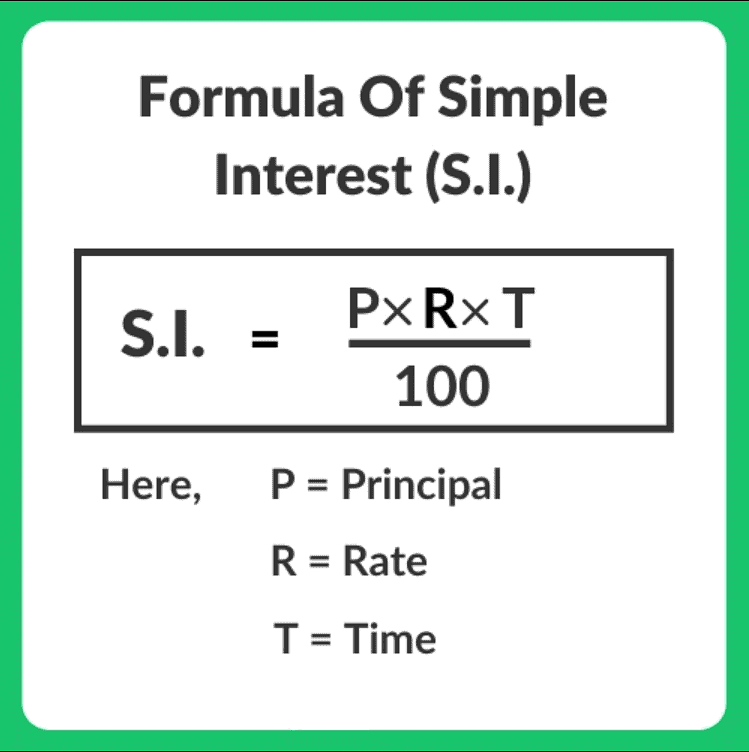 Where P = Principal or the sum borrowed

T = Number of years for which the borrowed money has been used.

The principal and the interest together is called amount. 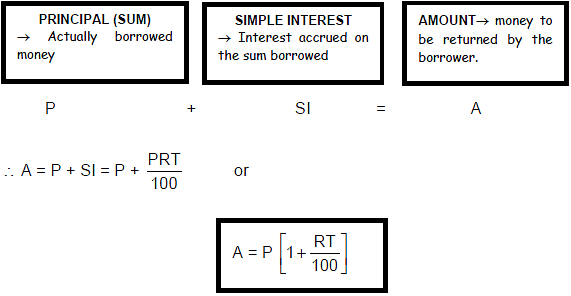 Try yourself:A certain sum of money invested at some rate of interest triples itself in 4 years. In how many years the principal will become 9 times of itself at the same rate?
Explanation

Example on Repayment Of Debt In Equal Installments

Dr. M. I. Rajpoot wants to buy an air-conditioner for his family. He went to a shop and selects an AC whose price is Rs. 12,700. The shopkeeper gave him two offers either you pay the full amount of Rs. 12,700 or pay only Rs. 4,000 and installment of Rs. 3000 per month for next 3 months just paying only Rs. 300 as interest. What is the rate of interest the shopkeeper charged Rajpoot?

As discussed in the topic on ‘Simple Interest’, the principal (P) remains constant throughout the period for which the money (principal) is borrowed. 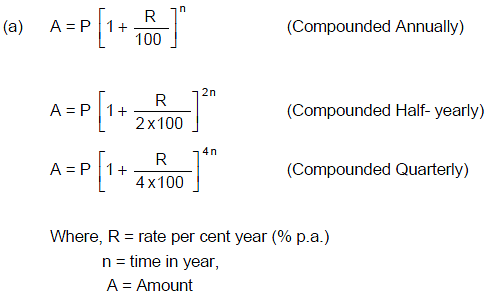 Try yourself:A certain sum of money doubles in 3 years, then in how many years it will become 8 times at compound interest?
Explanation

Think logically that in every 2 years, the principal becomes doubles of itself. So in 4 years, it will be 4 times and in the next two years, it will be double of 4 times that is 8 times of original principal. So the required answer would be 8 years.

For the first year the simple interest and compound interest, both are same, but with the next following years the C.I will always be more than the S.I.

Let P is the principal invested at r% rate per annum at S.I and C.I respectively. What will be the difference between SI and CI for different years? 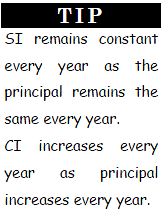 Some Solved Examples on InterestEx.1 If a principle becomes 3 times in 10 years according to simple interest, what is the rate of interest?

Ex.2 A man took Rs. 5000 at 10% simple interest and gave it to another person at 10% compound interest, which is being compounded annually. After 3 years, how much extra money he will get?

Sol. He has to pay

Ex.3 Certain money becomes double in 4 years according to simple interest. In how many years, will it become 3 times?

Ex.4 Certain money doubles itself according to compound interest in 3 years. How much time does it take to become 4 times?

Since both got the same money. 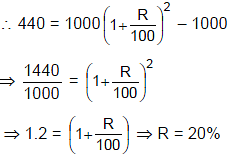 Ex.7 Two equal sums are lent at the same time at 6% and 5% simple interest respectively. The former is received 2 years earlier than the later, and the amount in each case is Rs. 2400. Find the sum?

Sol. Let the sum be Rs. x & the latest period be n years

Ex.8 Ram invests a certain amount of money and earns a Compound Interest of Rs. 420 in the second year and a C.I. of Rs. 462 in the third year. Calculate at what rate of interest did Ram invest?

The capital is divided into equal parts called shares. 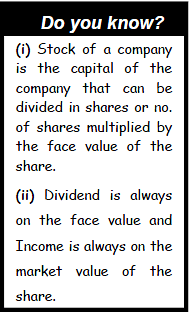 The term stock is also applied to the various amounts of money which have been borrowed by the Government or by the corporations of cities.

To pay the interest on different sums of money borrowed from time to time, the Government sets aside certain funds.

(1) Stock at Par: Stock is said to be at par if the market value of the stock is equal to its face value. (Market Value = Face Value)

(2) Stock at a premium (or above par): Stock is said to be at a premium if the market value of the stock is greater than its face value. (Market value = Face value + Premium)

The distinction between Stock & Shares

The total investment of a company is called stock.

When a company makes a profit, part of that profit is divided amongst the shareholders and it is called the dividend. The dividend is always calculated on the face value of a share and is generally expressed as a percentage.

DebenturesA debenture is an acknowledgement of a debt of a company. Debentures are equal parts of a loan raised by a company. A debenture holder is a creditor of the company and is entitled to a fixed return every year irrespective of profits. If a company is wound up, the amount due to debenture holders must be paid before anything is paid to the share holders.

Some Solved Examples of Stocks & Shares

If investment is Rs. 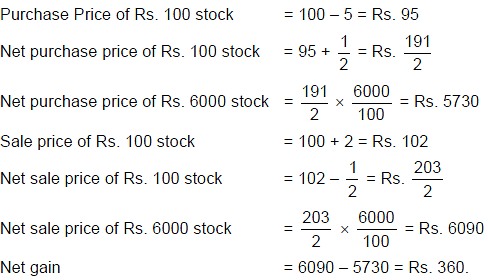 Alternate Method: From above –

Note: Percentage Return on the shares purchased less than the market value will always be more than the actual return.