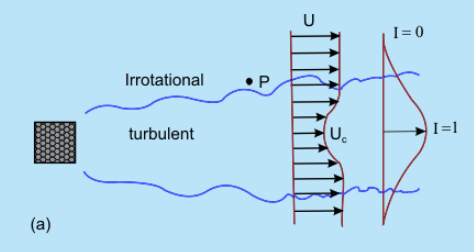 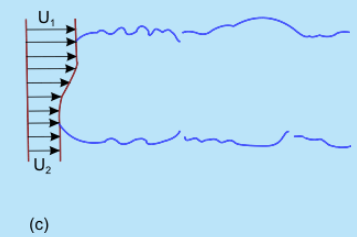 On the basis of condition (33.4), it is postulated that if at an instant there is an increase in u' in the x -direction, it will be followed by an increase in v' in the negative y -direction. In other words, 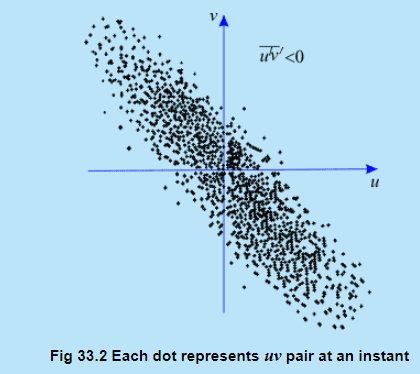 Invoking the concepts of eqn. (32.8) into the equations of motion eqn (33.1 a, b, c), we obtain expressions in terms of mean and fluctuating components. Now, forming time averages and considering the rules of averaging we discern the following. The terms which are linear, such as

, v but the quadratic terms in the fluctuating components remain in the equations. After averaging, they form

If we perform the aforesaid exercise on the x-momentum equation, we obtain

Introducing simplifications arising out of continuity Eq. (33.3a), we shall obtain.

and so on. The apparent stresses are much larger than the viscous components, and the viscous stresses can even be dropped in many actual calculations . 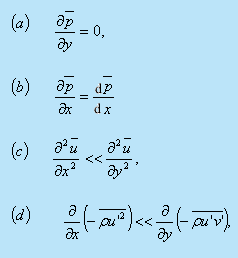 which can be integrated as ,

However, the wall shear stress in the vicinity ofthe laminar sublayer is estimated as

where Us is the fluid velocity at the edge of the sublayer. The flow in the sublayer is specified by a velocity scale (characteristic of this region).

as our velocity scale. Once ur is specified, the structure of the sub layer is specified. It has been confirmed experimentally that the turbulent intensity distributions are scaled with ur . For example, maximum value of the

Now we can write

Hence, a non-dimensional coordinate may be defined as,

which will help us estimating different zones in a turbulent flow. The thickness of laminar sublayer or viscous sublayer is considered to be n ≈ 5. Turbulent effect starts in the zone of n > 5 and in a zone of 5< n < 70, laminar and turbulent motions coexist. This domain is termed as buffer zone. Turbulent effects far outweight the laminar effect in the zone beyond n = 70 and this regime is termed as turbulent core .

where the channel is assumed to have a height 2h and

is the distance measured from the centreline of the channel (= h - y). Figure 33.1 explains such variation of turbulent stress.

In analogy with the coefficient of viscosity for laminar flow, J. Boussinesq introduced a mixing coefficient μr for the Reynolds stress term, defined as

Using μr the shearing stresses can be written as

such that the equation

may be written as

Unfortunately the value of vt  is not known. The term vt is a property of the fluid whereas νt is attributed to random fluctuations and is not a property of the fluid. However, it is necessary to find out empirical relations between vt, and the mean velocity. The following section discusses relation between the aforesaid apparent or eddy viscosity and the mean velocity components 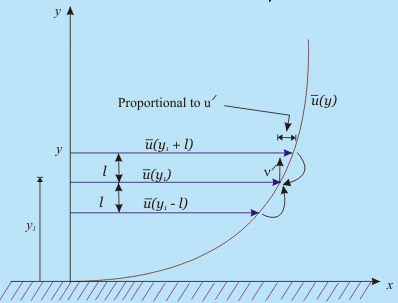 The above expression is obtained by expanding the function

in a Taylor series and neglecting all higher order terms and higher order derivatives. l is a small length scale known as Prandtl's mixing length . Prandtl proposed that the transverse displacement of any fluid particle is, on an average, 'l' .

Consider another lump of fluid with a negative value of v'. This is arriving at y1 from ( y1 + 1). If this lump retains its original momentum, its mean velocity at the current lamina y1 will be somewhat more than the original mean velocity of y1. This difference is given by

along with the condition that the moment at which u' is positive, v' is more likely to be negative and conversely when u' is negative. Possibly, we can write at this stage

where C1 and C2 are different proportionality constants. However, the constant C2 can now be included in still unknown mixing length and Eg. (33.18) may be rewritten as

(33.20a)where the apparent viscosity may be expressed as

(33.20b)and the apparent kinematic viscosity is given by