In mathematics, a normed vector space is a vector space over the real or complex numbers, on which a norm is defined. A norm is the formalization and the generalization to real vector spaces of the intuitive notion of distance in the real world. A norm is a real-valued function defined on the vector space that has the following properties: 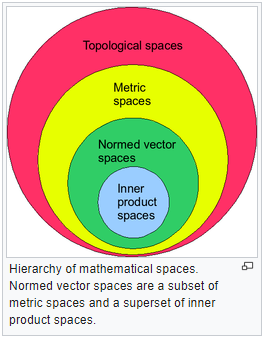 V.A seminormed vector space is a pair (V,p) where V is a vector space and p a seminorm on V.We often omit p or

and just write V for a space if it is clear from the context what (semi) norm we are using.In a more general sense, a vector norm can be taken to be any real-valued function that satisfies the three properties above.A useful variation of the triangle inequality is

for any vectors x and y. This also shows that a vector norm is a continuous function.Note that property 2 depends on a choice of norm

on the field of scalars. When the scalar field is

(or more generally a subset of

), this is usually taken to be the ordinary absolute value, but other choices are possible. For example, for a vector space over

to be the p-adic norm, which gives rise to a different class of normed vector spaces.

Topological structure:-If (V, ‖·‖) is a normed vector space, the norm ‖·‖ induces a metric (a notion of distance) and therefore a topology on V. This metric is defined in the natural way: the distance between two vectors u and v is given by ‖u−v‖. This topology is precisely the weakest topology which makes ‖·‖ continuous and which is compatible with the linear structure of V in the following sense:1. The vector addition + : V × V → V is jointly continuous with respect to this topology. This follows directly from the triangle inequality.2. The scalar multiplication · : K × V → V, where K is the underlying scalar field of V, is jointly continuous. This follows from the triangle inequality and homogeneity of the norm.Similarly, for any semi-normed vector space we can define the distance between two vectors u and v as ‖u−v‖. This turns the seminormed space into a pseudometric space (notice this is weaker than a metric) and allows the definition of notions such as continuity and convergence. To put it more abstractly every semi-normed vector space is a topological vector space and thus carries a topological structure which is induced by the semi-norm.Of special interest are complete normed spaces called Banach spaces. Every normed vector space V sits as a dense subspace inside a Banach space; this Banach space is essentially uniquely defined by V and is called the completion of V.All norms on a finite-dimensional vector space are equivalent from a topological viewpoint as they induce the same topology (although the resulting metric spaces need not be the same).And since any Euclidean space is complete, we can thus conclude that all finite-dimensional normed vector spaces are Banach spaces. A normed vector space V is locally compact if and only if the unit ball B = {x : ‖x‖ ≤ 1} is compact, which is the case if and only if V is finite-dimensional; this is a consequence of Riesz's lemma. (In fact, a more general result is true: a topological vector space is locally compact if and only if it is finite-dimensional. The point here is that we don't assume the topology comes from a norm.)The topology of a seminormed vector space has many nice properties. Given a neighbourhood system N(0) around 0 we can construct all other neighbourhood systems as

Moreover there exists a neighbourhood basis for 0 consisting of absorbing and convex sets. As this property is very useful in functional analysis, generalizations of normed vector spaces with this property are studied under the name locally convex spaces.

is a seminorm on the vector space of all functions on which the Lebesgue integral on the right hand side is defined and finite. However, the seminorm is equal to zero for any function supported on a set of Lebesgue measure zero. These functions form a subspace which we "quotient out", making them equivalent to the zero function.

with vector addition defined as

and scalar multiplication defined as

We define a new function q

which is a seminorm on X. The function q is a norm if and only if all qi are norms.More generally, for each real p≥1 we have the seminorm: