Depreciation is a permanent, continuing and gradual decrease in the book value of fixed assets. It is based on the cost of assets consumed in a business and not on its market value.

1. It is decline in the book value of fixed assets.

2. Such a decline is permanent in nature and once there value is reduced due to depreciation it can’t be restored to its original value.

3. It includes loss of value due to effluxion of time, usage or obsolescence.

4. It is a continuing process.

5. It is a non-cash expense. It does not involve any cash out flow.

2. With the passage of time - When the assets are exposed to the forces I of nature like weather, winds, rains, etc. the value of such assets may decrease even if they are not put to any use.

4. Expiration of legal rights - When the use of an asset (e.g., Patents, Leases) is governed by the time bound arrangement, the value of such assets may decrease with the passage of time.

1. To ascertain True Financial Performance - For proper matching of costs with revenues, it is necessary to charge the depreciation (cost) against income (revenue) in each accounting period. Unless the depreciation is charged against income, the financial performance would be overstated. As a result the Income Statement would not present a true and fair view of the financial performance of an accounting entity.

4. To comply with Legal Requirements - In case of companies, it is compulsory to charge depreciation on fixed assets before it declares dividend

5. To accumulate Funds for Replacement of Assets - A portion of profits is set aside in the form of depreciation and accumulated each year to provide a definite amount at a certain future date for the specific purpose of replacement of the asset at the end of its useful life.

The amount of depreciation is usually based on the following three factors:

1. Historical cost of a depreciable asset implies the cost incurred on its acquisition, installation, commissioning and for additions to or improvements thereof which are of capital nature.

3. Estimated Residual Value of a depreciable asset implies the value expected to be realised on its sale or exchange on the expiry of its useful life.

Depreciation And Other Related Concepts:

(i) Depreciation: Depreciation means decrease in the book value of tangible fixed assets due to their use in business, efflux (passage) of time or obsolescence.

(ii) Depletion: The term Rs.depletion’ is used in relation of natural resources like quarries, oil wells, mines, etc. When natural resources are extracted or exhausted their stock value is reduced. This reduction is termed as depletion.

(iv) Obsolescence: It refers to decline in the economic value of the asset due to innovation or improved technique, change in taste or fashion or inadequacy of the existing asset due to improved demand

Under the Straight Line Method, a fixed and equal amount of depreciation, calculated at a fixed percentage on the original cost of a Fixed Depreciable Asset is written off during each accounting period over the expected useful life of the asset.

For example - the original cost of the asset is Rs. 2,50,000, The useful life of the asset is 10 years and net residual value is estimated to be Rs. 50,000. Now, the amount of depreciation to be charged every year will be computed as given below –

1. It is easy to understand.

2. It is easy to calculate the amount and rate of depreciation.

3. Under this method, the book value of the asset becomes zero or equal to its scrap value at the expiry of its useful life.

1. The total charge (i.e., Depreciation plus Repairs and Renewals) in later years is more as compared to that in earlier years since, the amount of repairs and renewals goes on increasing as the asset grows older whereas the amount of depreciation remains constant year after year.

2. It does not take into consideration the interest on the capital invested in the asset.

3. It does not provide for the replacement of the asset on the expiry of its useful life.

SLM is suitable for those assets in relation to which

(a) repair charges are less, and

(b) the possibility of obsolescence is less. This method is suitable for Furniture, Patent, Copyright, Trademark, Lease etc.

Under the Written Down Value method, depreciation calculated at a fixed percentage on the Original Cost (in the first year) and on the Written Down Value, (in subsequent years) of a Fixed Depreciable Asset is written off during each accounting period over the expected useful life of the asset. Under this method, the rate of depreciation remains constant year after year whereas the amount of depreciation goes on decreasing It is also known as diminishing balance method / reducing balance method For example, the original cost of the asset is Rs. 2,00,000 and depreciation is charged @ 10% p.a. at written down value, then the amount of depreciation will be computed as follows: 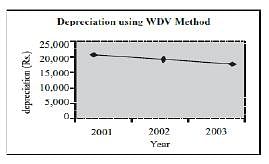 2. This method is logical in the sense that as the asset grows older, the amount of depreciation also goes on decreasing.

1. It is difficult to calculate the rate of depreciation.

2. It does not take into consideration the interest on capital invested in the asset.

3. It does not provide for the replacement of the asset on the expiry of its useful life.

4. It takes a very long time to write an asset down to its break-up value, unless a very high rate is used.

Comparison of straight line and written down value method: