After studying this chapter, you will be able to:

In the first chapter of the study material, we had introduced business facilitators as a system of arrangements that ease the doing of business. Drawing an analogy, can you recall that in our primary classes we read about our helpers? The way they simplify our lives and make us comfortable, business facilitators do the same for the businesses. We rationalised their need in the context of complexities associated with pursuing business as an occupation / career vis-à-vis a well-defined employment and not so complex professional practice. One may argue that since auxiliaries or aids to trade such as banking, insurance, transport, warehousing etc. too ease the doing of business, these should also be referred to as organizations facilitating business. Yes, these are. All the auxiliaries to trade comprise an important layer of business facilitators. Let’s us situate these at the intermediate layer. In the layer above one would like to place such policy making and executive agencies as the Reserve Bank of India (RBI), the Securities and Exchange Board of India (SEBI), Competition Commission of India (CCI) and such regulatory cum developmental agencies such as Insurance Regulatory and Development Authority (IRDA). One may also envisage a layer of facilitators below that we may refer to as the Point of Contact Layer. Together, these may be regarded as comrpsing what may be defined as Business Facilitaiton System (Figure #1). 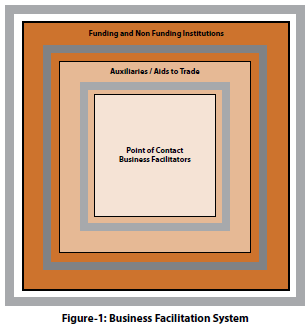 Government as a Business Facilitator

India’s freedom fighters did not merely fight for political independence of India. They had a long term vision of India’s economic development. The Union Government came up with the Industrial Policy statement in 1948, barely a few months after independence. In 1951, the Union Government enacted the Industries Development & Regulation Act. The IDRAI entrusted the government with the responsibility of ushering in economic development via industrialisation in India. The Industrial Policy Resolution of 1956 providing for the respective roles of the Public Sector, Large Industries and Small Scale Industries guided the growth of business in India for more than three decades. Initially, the public sector enterprises were to command the industrial development of India. Role of private sector was limited to the production of consumer goods. However, as the economy got stronger with time and the other wherewithal of facilitation of private businesses e.g. initially the development banks, the industrial estates and later a developed capital market

etc. took shape, the private sector has grown from strength to strength. In this context, the New Economic Policy of 1991 which is better known as the LPG or GPL policy i.e. the policy of liberalisation, privatisation and globalisation is regarded as the watershed development in business facilitation in India.

The government facilitates business not only via formulating business friendly policies but also by creating an institutional apparatus for the implementation of those policies. In the preceding chapter you have learnt about the policies; in this chapter our focus is on institutions.