Fixed StorageA Fixed storage is an internal media device that is used by a computer system to store data, and usually these are referred to as the Fixed Disks drives or the Hard Drives.Fixed storage devices are literally not fixed, obviously these can be removed from the system for repairing work, maintenance purpose, and also for upgrade etc. But in general, this can’t be done without a proper toolkit to open up the computer system to provide physical access, and that needs to be done by an engineer.Technically, almost all of the data i.e. being processed on a computer system is stored on some type of a built-in fixed storage device.

Removable StorageA Removable storage is an external media device that is used by a computer system to store data, and usually these are referred to as the Removable Disks drives or the External Drives.

In a storage factors, the main benefit of removable disks is that they can provide the fast data transfer rates associated with storage area networks (SANs)

There are the following main types of storage media:

1. Magnetic storage mediaMagnetic media is coated with a magnetic layer which is magnetized in clockwise or anticlockwise directions. When the disk moves, the head interprets the data stored at a specific location in binary 1s and 0s at reading.

Hard disk drive components: Most of the basic types of hard drives contains a number of disk platters that are placed around a spindle which is placed inside a sealed chamber. The chamber also includes read/write head and motors. Data is stored on each of these disks in the arrangement of concentric circles called tracks which are divided further into sectors. Though internal Hard drives are not very portable and used internally in a computer system, external hard disks can be used as a substitute for portable storage. Hard disks can store data upto several terabytes. 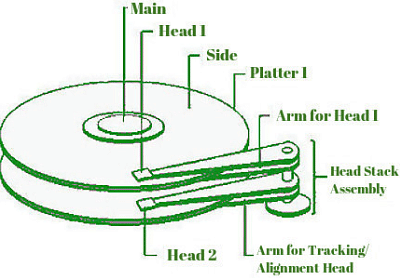 Pen Drives or Thumb drives or Flash drives are the recently emerged portable storage media. It is an EEPROM based flash memory which can be repeatedly erased and written using electric signals. This memory is accompanied with a USB connector which enables the pen drive to connect to the computer. They have a capacity smaller than a hard disk but greater than a CD. Pen drive has following advantages: