The document Introduction to Adsorption - Adsorption Chemistry Notes | EduRev is a part of the Chemistry Course Physical Chemistry.
All you need of Chemistry at this link: Chemistry

DISTINCTION BETWEEN ADSORPTION AND ABSORPTION

There are two main types of adsorption of gases on solids.If accumulation of gas on the surface of a solid occurs on account of weak van der Walls’ force, the adsorption is termed as physical adsorption or physic-sorption. When t he gas molecules or atoms are held to the solid surface by chemical bonds, the adsorption is termed chemical adsorption or chemisorption. The chemical bonds may be covalent or ionic in nature. Chemisorption has a rather high energy of activation and is, therefore, often referred to as activated adsorption. Sometimes these two processes occur simultaneously and it is not easy to ascertain the type of adsorption. A physical adsorption at low temperature may pass into chemisorption as the temperature is increased. For example, hydrogen is first adsorbed on nickel by van der Walls’ force. Molecules of hydrogen then dissociate and hydrogen atoms are held on the surface by chemisorption.

COMPARISON OF PHYSI-SORPTION AND CHEMISORPTION

ADSOPTION OF GASES ON SOLIDS Following are the factors which influence the extent of adsorption of gases on solid surface:

(a) Nature of adsorbent:

(e) Temperature: An increase in temperature decreases physical adsorption (Figure 1) whereas, chemisorption first increases and then decreases. Usually adsorption being exothermic and thus effect of temperature is in accordance with Le-Chatelier principle. However in chemisorption, some activation energy is needed to cross the energy barrier of adsorption like ordinary chemical reactions. The plots of extent of adsorption (x/m) vs. temperature at constant pressure, are called adsorption isobars.

FREUNDLICH ADSORPTIN ISOTHERMFreundlich, in 1909, gave an empirical relationship between the quantity of gas adsorbed by unit mass of solid adsorbent and pressure at a particular temperature. The relationship can be expressed by the following equation. 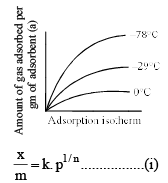 Langmuir Adsorption Isotherm : The Langmuir adsorption isotherm is represented as

(where a and are two Langmuir parameters) At very high pressure, the above isotherm acquires the limiting form;

And at very low pressure it is reduced to

The parameters a and b, can be determined by following equation

A plot of m/x against 1/P would give a straight line with slope and intercept equal to 1/a and b/a respectively.