The document Introduction to Differential Equations JEE Notes | EduRev is a part of the JEE Course Mathematics (Maths) Class 12.
All you need of JEE at this link: JEE

Order and Degree of a Differential Equation

A differential equation is said to be linear, if the dependent variable and all of its derivatives occurring in the first power and there are no product of these. A linear equation of nth order can be written in the form

Integrating above equation twicely, we get y = A cos x + B sin x.

Solution of a differential equation is also called its primitive.

Differentiate the equation successively n times to get n equations.

Eliminating the arbitrary constants from these n + 1 equations leads to the required differential equations.

Solutions of Differential Equations of the First Order and First Degree

A differential equation of first degree and first order can be solved by following method.

For this, remember the following results 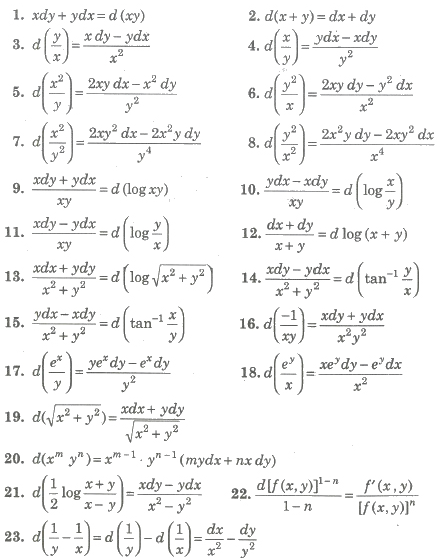 The given equation becomes

Hence, the variables are separated in terms of z and x.

A function f(x, y) is said to be homogeneous of degree n, if

Suppose a differential equation can be expressed in the form

where, f(x, y) and g(x, y) are homogeneous function of same degree. To solve such types of equations, we put y = vx

The given equation, reduces to

Hence, the variables are separated in terms of v and x.

The differential equation of the form

On solving, we get Similarly, for the second differential equation dx / dy + Rx = S, the integrating factor, IF = e ∫R dy and the general solution is

Bernoulli’s Equation An equation of the form dy / dx + Py = Qyn, where P and Q are functions of x along or constants, is calledBernoulli’s equation.

Divide both the sides by yn, we get

The equation reduces to

which is linear in z and can be solved in the usual manner.

is called clairaut form of differential equation. In which, get its general solution by replacing P from C.

Any curve, which cuts every member of a given family of curves at right angle, is called an orthogonal trajectory of the family.

Procedure for finding the Orthogonal Trajectory

(i) Let f(x,y,c)= 0 be the equation of the given family of curves, where ‘c’ is an arbitrary parameter.

(ii) Differentiate f = 0, with respect to ‘x’ and eliminate 0, i.e., from a differential equation.

This will give the differential equation of the orthogonal trajectories.

(iv) By solving this differential equation, we get the required orthogonal trajectories.