The document Introduction to Percentages Quant Notes | EduRev is a part of the CAT Course Quantitative Aptitude (Quant).
All you need of CAT at this link: CAT

Have a look at CAT 2019's question that is a mix of Percentages and Profit & Loss chapters:

‘Percent’ as the name suggests ‘per’ means every and ‘cent’ means hundred i.e. “for every hundred”. 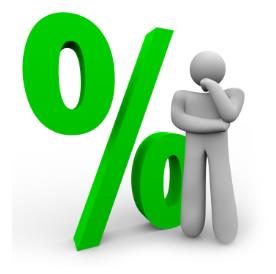 Example: Ana got 20 marks out of 40. Then, how many marks did she get when compared to 100?Solution: By unitary method.

A percentage can only be calculated if it has base value or denominator.

In the above example, the base value or denominator was 40, which means to say that Ana secured 20 marks out of 40 (which is the base value of calculation of marks secured.)

Note: Initial value is taken as base or ‘denominator’ while calculating percent change.

If the report is retyped:

► New sheets have 65 lines, with 70 characters per line

► Hence, 16 pages will be required if the report is retyped.

► Let x be the total number of voters.

Example 3. A person who has a certain amount with him goes to market. He can buy 50 oranges or 40 mangoes. He retains 10% of the amount for taxi fares and buys 20 mangoes and of the balance, he purchases oranges. The number of oranges he can purchase is:

► Let the price of one orange be Rs. x

► Let the total number of employees in the company be x

Question 2:If the price of sugar goes up by 10%, then what should be the percentage decrease in the quantity consumed so that the total expenditure on sugar remains the same?
Explanation

Let the cost prices of a pen and a books be x and y respectively.

From 1st given condition,

From 2nd given condition,

On subtracting equation (ii) from (i), we get