In chemistry, a reaction mechanism is the step by step sequence of elementary reactions by which overall chemical change occurs. A reaction in which the substrate and the reagent add up to form a product is called an addition reaction.

This is a characteristic reaction of unsaturated hydrocarbons, e.g.,

Both the reactants add to form a single product.

The mechanism of the reaction is based on the following observations:

On the basis of the above observations, the following mechanism is suggested:

Try yourself:In the given molecule where will electrophile will attack?

-CH3O is a +M group, so it has lone pair to donate to upcoming electrophile.

Try yourself:What type of reaction takes place upon treatment of a ketone with HCN to form a cyanohydrin?
Explanation

The atoms of HCN add to the carbon-oxygen double bond of the ketone by nucleophilic attack of the cyanide anion on the electrophilic carbon of the carbonyl.

which is a strong nucleophile, and so no catalyst is required for the addition.

A straightforward reactions then possible, e.g.,

However, addition of MgBr2 (Lewis acid) increases the rate of addition. From this and other evidence (complex of Mg with the carbonyl oxygen), it is suggested that one molecule of RMgX complexes with the oxygen to facilitate the attack of the other molecule to the carbonyl carbon.

A reaction in which one group or atom is replaced by another is called a substitution reaction. The incoming group is bonded to the same carbon to which the leaving group was bonded.

Radical substitution reactions are initiated by radicals in the gas phase or in non-polar solvents.

Nucleophilic substitution reaction is a class of organic reactions where one nucleophile replaces another. 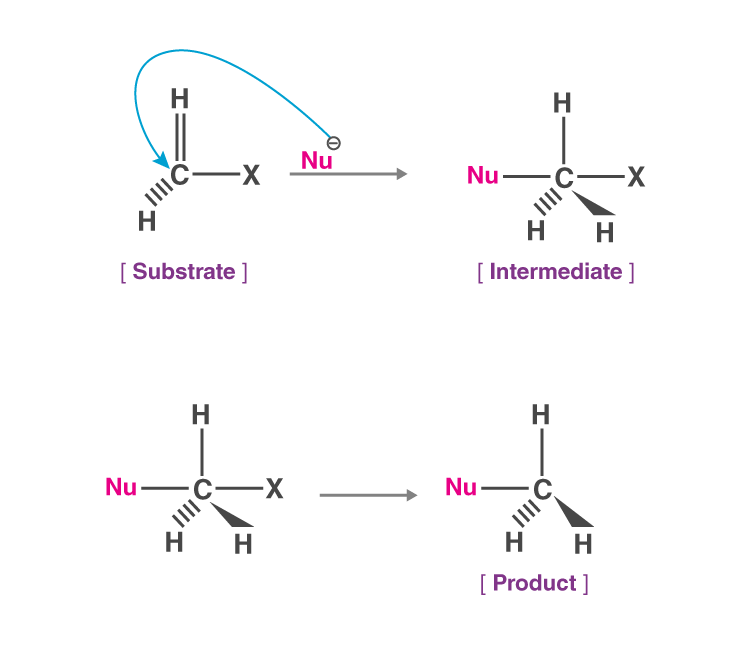 (a) At Saturated Carbon

Try yourself:Which one is an excellent substrate for SN2 reaction?
Explanation

Alpha-halo carbonyl undergoes fastest SN2 reaction due to the coupling of π* of CO bond and π* of C–X bond.

(b) At Unsaturated Carbon

Substitution of Hydrogen of Benzene

Substitution of Groups other than Hydrogen

Electrophilic aromatic substitution reactions are organic reactions wherein an electrophile replaces an atom which is attached to an aromatic ring. Commonly, these reactions involve the replacement of a hydrogen atom belonging to a benzene ring with an electrophile. The various aromatic electrophilic substitutions follow the same mechanistic pattern which is generalized below.

Let us now consider some of the individual substitution reactions.

Try yourself:What will be the attacking electrophile in this reaction?