Statistics is the practice or science of collecting and analyzing numerical data in large quantities, especially for the purpose of inferring proportions in a whole from those in a representative sample.

There are two categories in statistics:1) Descriptive statistics2) Inferential statistics.

From a GMAT perspective, our focus would be on some of the measures of descriptive statistics.

Descriptive statistics is a summary of certain data, whose purpose is to give an overview.

2. Measures of Dispersion or Variation

Measures of Central tendency refer to a value that is usually the center point of a data set.

Formula for Calculating the Mean / AverageMean = Sum of the elements/Number of elements in the set.Consider the following example:Q. Tom scored 88 in English, 97 in Math, 90 in Science and 85 in Social Studies. Calculate his average marks.Solution: Average marks obtained by Tom = (88+97+90+85)/4 = 90.

The Median of a data set is the middle value of the set when the elements are arranged in ascending or descending order.

The Mode of a data set is the most frequently occurred value in the set.

We will be focusing on two measures of Dispersion: Range and Standard deviation.

This is probably the simplest measure of dispersion. It is obtained by calculating the difference between the highest and the least values of a set.The range of the data set {3, 4, 10, 14, 8} is 14-3 = 11.

The Standard deviation of a set is calculated in five steps.

Step 1 of solving this GMAT Statistics Question: Find the sum of both the series

x is common to both the series. So, x is not going to make a difference to the average.

Only the remaining 4 numbers will contribute to the difference in average between the two series.

Step 2 of solving this GMAT Statistics Question: Difference in the sum of the two series

Step 3 of solving this GMAT Statistics Question: Calculating the average of the second series

Observe that each number in the new series, with the exception of "x", has increased by 20

Step 1 of solving this GMAT Statistics Question: Understanding the given data

The mean of 5 consecutive numbers is the 3rd term - the middle term.

Step 2 of solving this GMAT Averages Question: Relating 'a' to 's'

The first sequence starts with 's'

Step 3 of solving this GMAT Averages Question: The second series and its mean

The second series of 9 consecutive numbers starts from s + 2

The average of the second sequence is a + 4

The fastest way to solve such questions is to assume a value for 's'.

The average of these 9 numbers is the middle term, which is 7

Choice E is the correct answer. 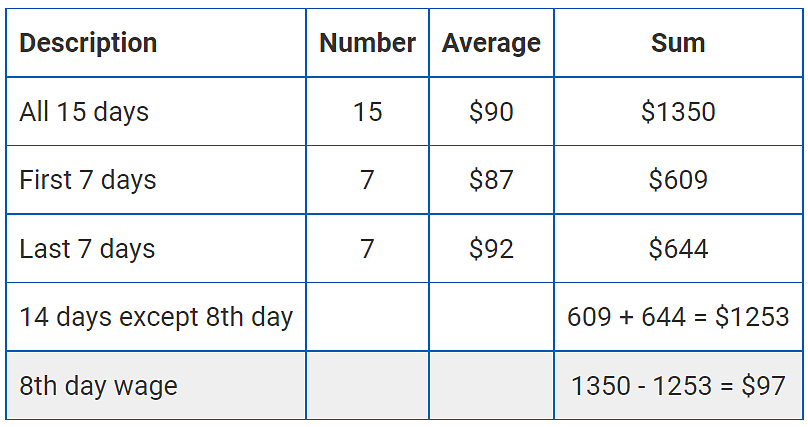 Fill in the data given in the question in the standard framework as shown above. Most questions in averages can be solved by completing this standard framework. The sum of wages is computed as the product of the number of days and the average wage earned per day.

The average of 5 quantities is 6.

The average of three of these 5 numbers is 8.

Average of these two remaining numbers = 62 = 3