Q. 54. A small ball is suspended over an infinite horizontal conducting plane by means of an insulating elastic thread of stiffness k. As soon as the ball was charged, it descended by x cm and its separation Horn the plane became equal to l. Find the charge of the ball.

Solution. 54. When the ball is charged, for the equilibrium of ball, electric force on it must counter balance the excess spring force, exerted, on the ball due to the extension in the soring. 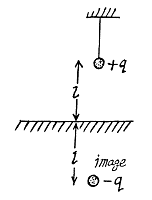 sought charge on the sphere.

Q. 55. A point charge q is located at a distance l from the infinite conducting plane. What amount of work has to be performed in order to slowly remove this charge very far from the plane.

Solution. 55. By definition, the work of this force done upon an elementry displacement dx (Fig.) is given by

where the expression for the force is obtained with the help of the image method. Integrating this equation over x between l and ∞, we find

Q. 56. Two point charges, q and —q, are separated by a distance 1, both being located at a distance l/2 from the infinite conducting plane. Find: (a) the modulus of the vector of the electric force acting on each charge; (b) the magnitude of the electric field strength vector at the midpoint between these charges.

Solution. 56. (a) Using the concept of electrical image, iit is clear that the magnitude of the force acting on each charge, 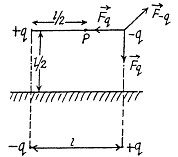 (b) Also, from the figure, magnitude of electrical field strength at P

Q. 57. A point charge q is located between two mutually perpendicular conducting half-planes. Its distance from each half-plane is equal to l. Find the modulus of the vector of the force acting on the charge.

Solution. 57. 7 Using the concept of electrical image, it is easily seen that the force on the charge q is,

Q. 58. A point dipole with an electric moment p is located at a distance l from an infinite conducting plane. Find the modulus of the vector of the force acting on the dipole if the vector p is perpendicular to the plane.

Solution. 58. Using the concept of electrical image, force on the dipole

field at the location of

Q. 59. A point charge q is located at a distance l from an infinite conducting plane. Determine the surface density of charges induced on the plane as a function of separation r from the base of the perpendicular drawn to the plane from the charge.

Solution. 59. To find the surface charge density, we must know the electric field at the point P (Fig.) which is at a distance r from the point O. 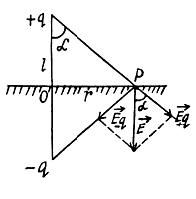 Using the image mirror method, the field at P,

where En is the projection of

respect to the conductor).

Q. 60. A thin infinitely long thread carrying a charge λ per unit length is oriented parallel to the infinite conducting plane. The distance between the thread and the plane is equal to l. Find: (a) the modulus of the vector of the force acting on a unit length of the thread; (b) the distribution of surface charge density σ (x) over the plane, where x is the distance from the plane perpendicular to the conducting surface and passing through the thread.

Solution. 60. (a) The force F1 on unit length of the thread is given by 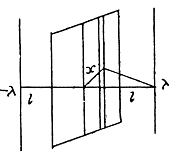 where E1 is the field at the thread due to image charge :

minus singn means that the force is one of attraction.

(b) There is an image thread with charge density- λ behind the conducting plane. We calculate the electric field on the conductor. It is

on considering the thread and its image.

Q. 61. A very long straight thread is oriented at right angles to an infinite conducting plane; its end is separated from the plane by a distance l. The thread carries a uniform charge of linear density λ. Suppose the point 0 is the trace of the thread on the plane. Find the surface density of the induced charge on the plane (a) at the point 0; (b) as a function of a distance r from the point 0. 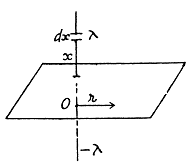 Q. 62. A thin wire ring of radius R carries a charge q. The ring is oriented parallel to an infinite conducting plane and is separated by a distance l from it. Find: (a) the surface charge density at the point of the plane symmetrical with respect to the ring; (b) the strength and the potential of the electric field at the centre of the ring.

Solution. 62. It can be easily seen that in accordance with the image method, a charge -q must be located on a similar ring but on the other side of the conducting plane. (Fig.) at the same nernendicular distance. From the solution of 3.9 net electric field at O, 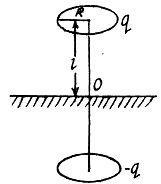 outward normal with respect to the conducting plane.

where minus sign indicates that the induced carge is opposite in sign to that of chaige q > 0.

Q. 63. Find the potential φ of an uncharged conducting sphere outside of which a point charge q is located at a distance l from the sphere's centre.

Q. 64. A point charge q is located at a distance r from the centre O of an uncharged conducting spherical layer whose inside and outside radii are equal to R1 and R2 respectively. Find the potential at the point O if r < R1. 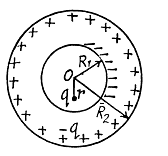 Hence, the potential at O is given by,

It should be noticed that the potential can be found in such a sim ple way only at O, since all the induced charges are at the same distance from this point, and their distribution, (which is unknown to us), does not play any role.

Solution. 65. Potential at the inside sphere,

Q. 66. Four large metal plates are located at a small distance d from one another as shown in Fig. 3.8. The extreme plates are inter-connected by means of a conductor while a potential difference Δφ is applied to internal plates. Find: (a) the values of the electric field strength between neighbouring plates; (b) the total charge per unit area of each plate.

Solution. 66. (a) As the metallic plates 1 and 4 are isolated and conncted by means of a conductor, φ1 = φ4. Plates 2 and 3 have the same amount of positive and negative charges and due to induction, plates 1 and 4 are respectively negatively and positively charged and in addition to it all the four plates are located a small but at equal distance d relative to each other, the magnitude o f electric field strength between 1 - 2 and 3 - 4 are both equal in magnitude and direction

be the field strength between the plates 2 and 3 which is directed form 2 to 3. Hence

(b) Since E α σ, we can state that according to equation (2) for part (a) the charge on the p4te 2 is divided into two parts; such that 1/3 rd of it lies on the upper side and 2/3 rd on its lower face.Thus charge density of upper face of plate 2 or of plate 1 or plate 4 and lower face of

Hence the net charge density of plate 2 or 3 becomes

which is obvious from the argument.

Q. 67. Two infinite conducting plates 1 and 2 are separated by a distance l. A point charge q is located between the plates at a distance x from plate 1. Find the charges induced on each plate.

Solution. 67. The problem of point charge between two conducting planes is more easily tackled (if we want only the total charge induced on the planes) if we replace the point charge by a uniformly charged plane sheet.

Let σ be the charge density on this sheet and E1, E2 outward electric field on the two sides of this sheet.

The conducting planes will be assumed to be grounded.

Q. 68. Find the electric force experienced by a charge reduced to a unit area of an arbitrary conductor if the surface density of the charge equals σ.

Solution. 68. Near the conductor

This field can be written as the sum of two parts E1 and E2 E1 is the electric field due to an infinitesimal area dS.

both sides. In calculating the force on the element dS we drop E1 (because it is a self-force.) Thus

Q. 69. A metal ball of radius R = 1.5 cm has a charge q = 10 μC. Find the modulus of the vector of the resultant force acting on a charge located on one half of the ball.

Solution. 69. The total force on the hemisphere is 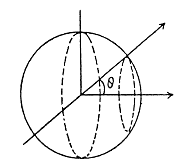 Q. 70. When an uncharged conducting ball of radius R is placed in an external uniform electric field, a surface charge density σ = σ0 cos θ is induced on the ball's surface (here ao is a constant, is a polar angle). Find the magnitude of the resultant electric force acting on an induced charge of the same sign.

Solution. 70. We know that the force acting on the area element dS of a conductor is, 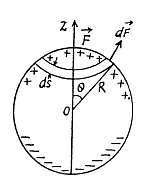 It follows from symmetry considerations that

directed along the z-axis, and hence it can be represented as the sum (integral) of the projection of elementary forces (1) onto the z-axis :

For simplicity let us consider an element area

Equation (2) takes the from

Integrating this expression over the half sphere (i.e. with respect to cos 0 between 1 and 0), we obtain