Solution. 86. At the interface of the dielectric and vacuum,

The electric field must be radial and

Q. 87. Two small identical balls carrying the charges of the same sign are suspended from the same point by insulating threads of equal length. When the surrounding space was filled with kerosene the divergence angle between the threads remained constant. What is the density of the material of which the balls are made? 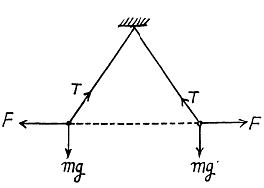 Since the inclinations do not change

where p0 is the density of K-oil and p that of the material of which the balls are made.

Q. 88. A uniform electric field of strength E = 100 V/m is generated inside a ball made of uniform isotropic dielectric with permittivity ε = 5.00. The radius of the ball is R = 3.0 cm. Find the maximum surface density of the bound charges and the total bound charge of one sign.

Solution. 88. Within the ball the electric field can be resolved into normal and tangential components.

(Since we are interested in the total charge of one sign we must intergrate cos θ from 0 to 1 only).

Q. 90. Making use of the formulation and the solution of the foregoing problem, find the magnitude of the force exerted by the charges bound on the surface of the dielectric on the point charge q.

Solution. 90. The force on the point chaige q is due to the bound charges. This can be calculated from the field at this chaige after extracting out the self field. This image field is

Q. 91. A point charge q is located on the plane dividing vacuum and infinite uniform isotropic dielectric with permittivity ε. Find the moduli of the vectors D and E as well as the potential q  as functions of distance r from the charge q. 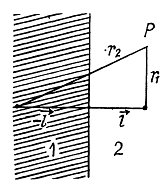 Q. 92. A small conducting ball carrying a charge q is located in a uniform isotropic dielectric with permittivity ε at a distance l from an infinite boundary plane between the dielectric and vacuum. Find the surface density of the bound charges on the boundary plane as a function of distance r from the ball. Analyse the obtained result for l→ 0. 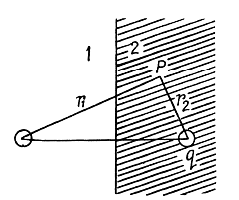 Q. 93. A half-space filled with uniform isotropic dielectric with permittivity a has the conducting boundary plane. Inside the dielectric, at a distance l from this plane, there is a small metal ball possessing a charge q. Find the surface density of the bound charges at the boundary plane as a function of distance r from the ball. 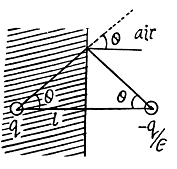 The image chaige must have magnitude

This is the density of bound charge on the surface.

Q. 94. A plate of thickness h made of uniform statically polarized dielectric is placed inside a capacitor whose parallel plates are interconnected by a conductor. The polarization of the dielectric is equal to P (Fig. 3.15). The separation between the capacitor plates is d. Find the strength and induction vectors for the electric field both inside and outside the plates.

Solution. 94. Since the condenser plates are connected,

Q. 95. A long round dielectric cylinder is polarized so that the vector P = αr, where α is a positive constant and r is the distance from the axis. Find the space density p' of bound charges as a function of distance r from the axis.

distance from the axis. The space density of charges is given by, p' = - div

Q. 96. A dielectric ball is polarized uniformly and statically. Its polarization equals P. Taking into account that a ball polarized in this way may be represented as a result of a small shift of all positive charges of the dielectric relative to all negative charges, (a) find the electric field strength E inside the ball; (b) demonstrate that the field outside the ball is that of a dipole located at the centre of the ball, the potential of that field being equal to φ = p0r/4π ε0, where P0 is the electric moment of the ball, and r is the distance from its centre.

Solution. 96. In a uniformly charged sphere, 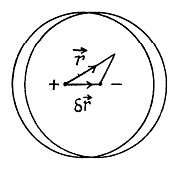 The total electric field is

(dipole moment is defined with its direction being from the -vc chaige to +ve charge.)

The potential outside is

is the total dipole moment.

Q. 97. Utilizing the solution of the foregoing problem, find the electric field strength E0 in a spherical cavity in an infinite statically polarized uniform dielectric if the dielectric's polarization is P, and far from the cavity the field strength is E.

in the following mannenjmagine the cavity to be filled wp with the dielectric. Then there will be a uniform

everywhere and a polarization

Now take out the sphere making the cavity, the_£lectric field inside the sphere will be

Solution. 98. By superposition the field

the bll is given by

On the other hand, if the sphere is not too small, the macroscopic equation

Q. 99. An infinitely long round dielectric cylinder is polarized uniformly and statically, the polarization P being perpendicular to the axis of the cylinder. Find the electric field strength E inside the dielectric.

Solution. 99. This is to be handled by the same trick as in Q.96. We have effectively a two dimensional situation. For a uniform cylinder full of charge with chaige density p0 (charge per unit volume), the electric field E at an inside point is along the (cylindrical) radius vector

(direction of electric dipole moment vector being from the negative charge to positive charge .)

using here the result of the foregoing problem.