Q.200. A free electron is located in the field of a monochromatic light wave. The intensity of light is I = 150 W/m2, its frequency is ω = 3.4.1015  s-1. Find: (a) the electron's oscillation amplitude and its velocity amplitude; (b) the ratio Fm/Fe, where Fm and Fe are the amplitudes of forces with which the magnetic and electric components of the light wave field act on the electron; demonstrate that that ratio is equal to

where v is the electron's velocity amplitude and c is the velocity of light.

Instruction. The action of the magnetic field component can be disregarded in the equation of motion of the electron since the calculations show it to be negligible.

Ans. In a travelling plane electromagnetic wave the intensity is simply the time averaged magnitude of the Poynting vector

(a) Represent the electric field at any point by

Then for the electron we have the equation.

he ampitude of the forced oscillation is

The velocity amplitude is clearly

For the magnetic force (which we have neglected above), it is

we see that the magnetic force is apart from a sign

Ratio of amplitudes of the two forces

Q.201. An electromagnetic wave of frequency ω propagates in dilute plasma. The free electron concentration in plasma is equal to no. Neglecting the interaction of the wave and plasma ions, find: (a) the frequency dependence of plasma permittivity; (b) how the phase velocity of the electromagnetic wave depends on its wavelength λ in plasma.

Ans.  (a) It turns out that one can neglect the spatial dependence of the electric field as well as the magnetic field. Thus for a typical electron

The ions, will be practically unaffected. Then

(b) The phase velocity is given by

Q.202. Find the free electron concentration in ionosphere if its refractive index is equal to n = 0.90 for radiowaves of frequency v = 100 MHz.

Ans. From the previous problem

Q.203. Assuming electrons of substance to be free when subjected to hard X-rays, determine by what magnitude the refractive index of graphite differs from unity in the case of X-rays whose wavelength in vacuum is equal to λ = 50 pm.

Ans. For hard x- rays, the electrons in graphite will behave as if nearly free and the formula of previous problem can be applied. Thus

Using the values of other constants and

Q.204. An electron experiences a quasi-elastic force kx and a "fric- tion force"

Ans. (a) The equation of the electron can (under the stated conditions) be written as

To solve this equation we shall find it convenient to use complex displacements. Consider the equation

Q.205. In some cases permittivity of substance turns out to be a complex or a negative quantity, and refractive index, respectively, a complex (n' = n + ix) or an imaginary (n' = ix) quantity. Write the equation of a plane wave for both of these cases and find out the physical meaning of such refractive indices.

Ans. Let us write the solutions of the wave equation in the form

and λ. is the wavelength in the medium. If

(λ0 is the wavelength in vacuum) and the equation becomes

This represents a plane wave whose amplitude diminishes as it propagates to the right (provided X' < 0).

(on putting n = 0 in the above equation).This represents a standing wave whose amplitude diminishes as one goes to the right (if X' < 0). The wavelength of the wave is infinite ( k' - 0 ).Waves of the former type are realized inside metals as well as inside dielectrics when there is total reflection, (penetration of wave). 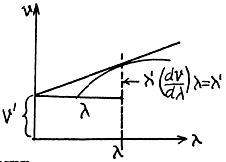 Q.208. Find the relation between the group velocity u and phase velocity v for the following dispersion laws:

Here λ, k, and ω are the wavelength, wave number, and angular frequency.

Q.209. In a certain medium the relationship between the group and phase velocities of an electromagnetic wave has the form uv = c2, where c is the velocity of light in vacuum. Find the dependence of permittivity of that medium on wave frequency, εω.

Ans. The phase velocity of light in the vicinity of

To get the group velocity we need to calculate

interpolation in the two intervals. Thus

Q.211. A train of plane light waves propagates in the medium where the phase velocity v is a linear function of wavelength: v = a + bλ, where a and b are some positive constants. Demonstrate that in such a medium the shape of an arbitrary train of light waves is restored after the time interval ζ = 1/b.

Q.212. A beam of natural light of intensity l0 falls on a system of two crossed Nicol prisms between which a tube filled with certain solution is placed in a longitudinal magnetic field of strength H. The length of the tube is l, the coefficient of linear absorption of solution is x, and the Verdet constant is V. Find the intensity of light transmitted through that system.

Ans. On passing through the first (polarizer) Nicol the intensity of light becomes

because one of the components has been cut off. On passing through the solution the plane of polarization of the light beam will rotate by