Q.150. How long will it take sound waves to travel the distance l between the points A and B if the air temperature between them varies linearly from T1  to T2? The velocity of sound propagation in air is equal to

where a is a constant.

Ans. Since the tempeiature varies linearly we can write the temperature as a function of x, which is, the distance from the point A towards B.

Which on integration gives

Q.151. A plane harmonic wave with frequency ω propagates at a velocity v in a direction forming angles α, β, γ with the x, y, z axes. Find the phase difference between the oscillations at the points of medium with coordinates x1, y1, z1 a nd x2, y2, z2.

Ans. Equation of plane wave is given by

called the wave vector and

is the unit vector normal to the wave surface in the direction of the propagation of wave. 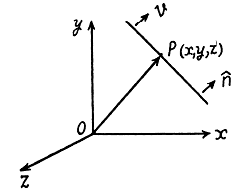 Q.152. A plane wave of frequency ω propagates so that a certain phase of oscillation moves along the x, y, z axes with velocities v1, v2, v3 respectively. Find the wave vector k, assuming the unit vectors ex, ey, ez  of the coordinate axes to be assigned.

Ans. The phase of the oscillation can be written as

When the wave moves along the x-axis

Since the velocity associated with this wave is v1

propagates in a medium K. Find the equation of this wave in a reference frame K' moving in the positive direction of the x axis with a constant velocity V relative to the medium K. Investigate the expression obtained.

Ans. The wave equation propagating in the direction of +ve x axis in medium K is give as

is the wave velocity

In the refrence frame K' , the wave velocity will be ( v - V ) propagating in the direction of +ve x axis and x will be x'. Thus the sought wave equation.

Q.154. Demonstrate that any differentiable function f (t + ax), where a is a constant, provides a solution of wave equation. What is the physical meaning of the constant α?

Ans. This follows on actually putting

in the wave equation

(We have written the one dimensional form of the wave equation.) Then

so the wave equation is satisfied if

That is the physical meaning of the constant α .

Q.155. The equation of a travelling plane sound wave has the form

Ans. The given wave equation

is of the type

= a cos (ωt — kx) propagates in a homogeneous elastic medium. For the moment t = 0 draw (a) the plots of

Ans. (a) The given equation is,

Hence all the graphs are similar having different amplitudes, as shown in the answer- sheet of the problem book.

(b) At the points, where

is positive and vice versa.

Ans. In the given wave equation the particle’s displacement amplitude = ae -yx

Let two points x1 and x2 , between which the displacement amplitude differ by η = 1 %

Q.158. Find the radius vector defining the position of a point source of spherical waves if that source is known to be located on the straight line between the points with radius vectors r1  and r2  at which the oscillation amplitudes of particles of the medium are equal to al and a2. The damping of the wave is negligible, the medium is homogeneous.

Ans. Let S be the source whose position vector relative to the reference point O is

Since intensities are inversely proportional to the square of distances,

But intensity is proportional to the square of amplitude.

be the unit vector along PQ directed from P to Q. 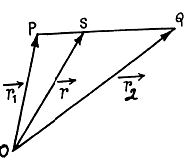 From the triangle law of vector addition.

Ans. (a) We know that the equation of a spherical wave in a homogeneous absorbing medium of wave damping coefficient γ is :

According to the conditions of the problem,

Q.160. Two plane waves propagate in a homogeneous elastic medium, one along the x axis and the other along the y axis:

2 = a cos (wt - ky). Find the wave motion pattern of particles in the plane xy if both waves (a) are transverse and their oscillation directions coincide; (b) are longitudinal.

Ans. (a) Equation of the resultant wave,

Now, the equation of wave pattern is,

Hence, the particles of the medium at the points, lying on the solid straight lines

and hence the particles at the points, lying on dotted lines do not oscillate.

(b) When the waves are longitudinal,

thus, the particles o f the medium at the points lying on the straight lines,

will oscillate along those lines (even n), or at right angles to them (odd n).

Thus the particles, at the points, where

will oscillate along circles.In general, all other particles will move along ellipses.

Q.161. A plane undamped harmonic wave propagates in a medium. Find the mean space density of the total oscillation energy (w), if at any point of the medium the space density of energy becomes equal to w0 one-sixth of an oscillation period after passing the displacement maximum.

Ans. The displacement of oscillations is given by

Without loss of generality, we confine ourselves to x = 0. Then the displacement maxima occur at ωt = nπ. Concentrate at ωt = 0 . Now the energy density is given by

Q.162. A point isotropic sound source is located on the perpendicular to the plane of a ring drawn through the centre 0 of the ring. The distance between the point 0 and the source is l = 1.00 m, the radius of the ring is R = 0.50 m. Find the mean energy flow across the area enclosed by the ring if at the point 0 the intensity of sound is equal to l0  = 30 µW/m2. The damping of the waves is negligible.

Ans. The power output of the source much be

The required flux of accoustic power is then :

Eqn. (1) is a well known result stich is derived as follows; Let SO be the polar axis. Then the required solid angle is the area of that part of the surface a sphere of much radius whose colatitude is ≤ α.

Q.163. A point isotropic source with sonic power P = 0.10 W is located at the centre of a round hollow cylinder with radius R = = 1.0 m and height h = 2.0 m. Assuming the sound to be completely absorbed by the walls of the cylinder, find the mean energy flow reaching the lateral surface of the cylinder.

Ans.  From the result of 4.162 power flowing out through anyone of the opening

As total power output equals P, so the power reaching the lateral surface must be.

Q.164. The equation of a plane standing wave in a homogeneous elastic medium has the form

Ans.  We are given

(a) The graphs of

(b) We can calculate the density as follows :

Take a parallelopiped of cross section unity and length dx with its edges at x and x + dx.

After the oscillation the edge at x goes to x +

Thus the volume of the element (originally dx) becomes

and hence the density becomes

On substituting we get for the density p (x) the curves shown in Fig.(35). referred to above.

= a cos kx- cos wt is maintained in a homogeneous medium of density ρ. Find the expressions for the space density of (a) potential energy wp (x, t); (b) kinetic energy wk (x, t). Plot the space density distribution of the total energy w in the space between the displacement nodes at the moments t = 0 and t = T/4, where T is the oscillation period.

(a) The potential eneigy density (per unit volume) is the eneigy of longitudinal strain. This is

(b) The kinetic energy density is

and the displacement nodes are at

so we do get the figure.

Ans. Let us denote the displacement of the elements of the string by

If X1 is the distance at which the displacement amplitude first equals 3.5 mm then

Thus we are dealing with the third overtone

Q.167. Find the ratio of the fundamental tone frequencies of two identical strings after one of them was stretched by η1 = 2.0% and the other, by η2  = 4.0%. The tension is assumed to 'be proportional to the elongation.

Q.168. Determine in what way and how many times will the fundamental tone frequency of a stretched wire change if its length is shortened by 35% and the tension increased by 70%.

In accordance with the problem, the new length

Q.169. To determine the sound propagation velocity in air by acoustic resonance technique one can use a pipe with a piston and a sonic membrane closing one of its ends. Find the velocity of sound if the distance between the adjacent positions of the piston at which resonance is observed at a frequency v = 2000 Hz is equal to l = = 8.5 cm.

Ans. Obviously in this case the velocityof sound propagation

where l2 and l1 are consecutive lengths at which resonance occur

Q.170. Find the number of possible natural oscillations of air column in a pipe whose frequencies lie below v, = 1250 Hz. The length of the pipe is l = 85 cm. The velocity of sound is v = 340 m/s. Consider the two cases: (a) the pipe is closed from one end; (b) the pipe is opened from both ends. The open ends of the pipe are assumed to be the antinodes of displacement.

Ans.  (a) When the tube is closed at one end

v = v/λor, v = v/2l Here, also, end correction has been neglected. So, the frequencies of higher modes of vibrations are given by

It may be checked by putting the values of n in the equation (1) that below 1285 Hz, there are a total of six possible natural oscillation frequencies of air column in the open pipe.