The document Irodov Solutions: Electric Capacitance Energy of An Electric Field- 2 Notes | EduRev is a part of the JEE Course I. E. Irodov Solutions for Physics Class 11 & Class 12.
All you need of JEE at this link: JEE

Solution. 117. Let, us make the charge distribution, as shown in the figure.

Hence, voltage across the capacitor C1

and voltage across the capacitor, C2

Q. 118. In a circuit shown in Fig. 3.22 find the potential difference between the left and right plates of each capacitor.

in the closed circuit, (Fig.) 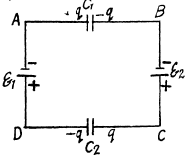 Hence the P.D. accross the left and right plates of capacitors,

Solution. 119. Taking benefit of tBe foregoing problem, the amount of charge on each capacitor

Q. 120. Determine the potential difference φA - φB between points A and B of the circuit shown in Fig. 3.23. Under what condition is it equal to zero? 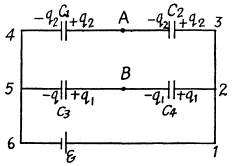 Q. 121. A capacitor of capacitance C1  = 1.0 μF charged up to a voltage V = 110 V is connected in parallel to the terminals of a circuit consisting of two uncharged capacitors connected in series and possessing the capacitances C2 = 2.0 μF and C3 = 3.0 μR. What charge will flow through the connecting wires?

Solution. 121. Let, the charge q flows through the connecting wires, then at the state of equilibrium, charge distribution will be as shown in the Fig. In the closed circuit 12341, using

Q. 122. What charges will flow after the shorting of the switch Sw in the circuit illustrated in Fig. 3.24 through sections 1 and 2 in the directions indicated by the arrows?

as they are in series combination (Fig.-a) 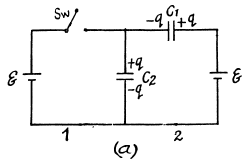 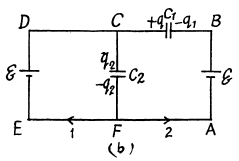 and charge flown through section

and the capacitor capacitances are equal to C1  = 2.0 μF and C2 = 3.0 μF. Find the charges which will flow after the shorting of the switch Sw through sections' 1, 2 and 3 in the directions indicated by the arrows. 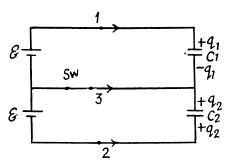 and when the switch is closed,

Hence, the flow of charge, due to the shortening of switch,

and through the section

Solution. 124. First of all, make the charge distribution, as shown in the figure. Q. 125. Determine the potential at point 1 of the circuit shown in Fig. 3.27, assuming the potential at the point O to be equal to zero. Using the symmetry of the formula obtained, write the expressions for the potentials. at points 2 and 3. 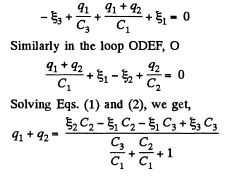 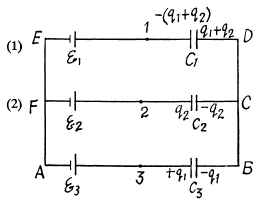 And using the symmetry

Solution. 126. Taking the advantage of symmetry of the problem charge distribution may be made, as shown in the figure.In the loop, 12561, - Δφ = 0 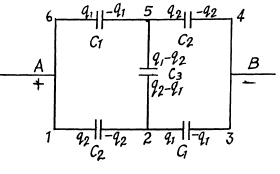 Now, capacitance of the network,

Q. 127. Determine the interaction energy of the point charges located at the corners of a square with the side a in the circuits shown in Fig. 3.29.

Solution. 127. (a) Interaction energy of any two point charges q1 and q2 is given by

is the separation between the charges. 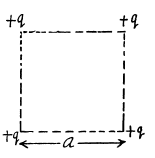 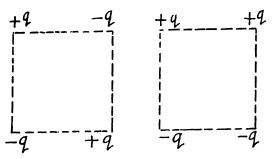 Hence, interaction energy of the system,

Q. 128. There is an infinite straight chain of alternating charges q and -q. The distance between the neighbouring charges is equal to a. Find the interaction energy of each charge with all the others. Instruction. Make use of the expansion of In (1 + α) in a power series in α.

Solution. 128. As the chain is of infinite length any two charge of same sign will occur symmetrically to any other charge of opposite sign.

So, interaction energy of each charge with all the others,

Q. 129. A point charge q is located at a distance l from an infinite tonducting plane. Find the interaction energy of that charge with chose induced on the plane.

Solution. 129. Using electrical im age method, interaction energy of the charge q with those induced on the plane.

Solution. 131. Charge contained in the capacitor of capacitance C1 is q = C1 φ and the energy, stored in it :

Now, when the capacitors are connected in parallel, equivalent capacitance of the system,

and hence, energy stored in the system :

as charge remains conserved during the process.

So, increment in the energy,