Q.189. An electromagnetic wave of frequency v = 3.0 MHz passes from vacuum into a non-magnetic medium with permittivity a = 4.0. Find the increment of its wavelength.

Ans. The velocity of light in a medium of relative permittivity

Q.190. A plane electromagnetic wave falls at right angles to the surface of a plane-parallel plate of thickness l. The plate is made of non-magnetic substance whose permittivity decreases exponentially from a value al  at the front surface down to a value a, at the rear one. How long does it take a given wave phase to travel across this plate?

Ans. From the data of the problem the relative permittivity of the medium varies as

Hence the local velocity of light

Q.191. A plane electromagnetic wave of frequency v = 10 MHz propagates in a poorly conducting medium with conductivity σ = = 10 mS/m and permittivity ε = 9. Find the ratio of amplitudes of conduction and displacement current densities.

on puting the values.

Q.192. A plane electromagnetic wave E = Em  cos (ωt— kr) propagates in vacuum. Assuming the vectors Em  and k to be known, find the vector H as a function of time t at the point with radius vector r = 0.

So integrating (ignoring a constant) and using

Q.195. Proceeding from Maxwell's equations show that in the case of a plane electromagnetic wave (Fig. 4.38) propagating in vacuum the following relations hold:

Q.196. Find the mean Poynting vector (8) of a plane electromagnetic wave E = Em  cos (ωt— kr) if the wave propagates in vacuum.

Q.197.. A plane harmonic electromagnetic wave with plane polarization propagates in vacuum. The electric component of the wave has a strength amplitude Em = 50 mV/m, the frequency is v 100 MHz. Find: (a) the efficient value of the displacement current density; (b) the mean energy flow density averaged over an oscillation period.

Q.198. A ball of radius R = 50 cm is located in a non-magnetic medium with permittivity ε = 4.0. In that medium a plane electromagnetic wave propagates,the strength amplitude of whose electric component is equal to Em = 200 Vim. What amount of energy reaches the ball during a time interval t = 1.0 min?

Ans. For the Poynting vector we can derive as in (196)

along the direction of propagation.

Hence in time t (which is much longer than the time period T of the wave), the eneigy reaching the ball is

Q.199. A standing electromagnetic wave with electric component E = Em  cos kx•cos ωt is sustained along the x axis in vacuum. Find the magnetic component of the wave B (x, t). Draw the approximate distribution pattern of the wave's electric and magnetic components (E and B) at the moments t = 0 and t = T/4, where T is the oscillation period.

Q.200. A standing electromagnetic wave E = Em  cos kx• cos ωt is sustained along the x axis in vacuum. Find the projection of the Poynting vector on the x axis sx (x, t) and the mean value of that projection averaged over an oscillation period.

Q.201. A parallel-plate air capacitor whose electrodes are shaped as discs of radius R = 6.0 cm is connected to a source of an alternating sinusoidal voltage with frequency ω = 1000 s-1. Find the ratio of peak values of magnetic and electric energies within the capacitor.

Ans. Inside the condenser the peak electrical energy

is the maximum voltage

Energy associated with this field is

The approximation are valid only if

Q.202. An alternating sinusoidal current of frequency ω = = 1000 s-1 f lows in the winding of a straight solenoid whose crosssectional radius is equal to R = 6.0 cm. Find the ratio of peak values of electric and magnetic energies within the solenoid.

then the peak magnetic eneigy is

The associated peak electric eneigy is

Q.203. A parallel-plate capacity whose electrodes are shaped as round discs is charged slowly. Demonstrate that the flux of the Poynting vector across the capacitor's lateral surface is equal to the increment of the capacitor's energy per unit time. The dissipation of field at the edge is to be neglected in calculations.

N ow electric field betw een the plates (inside it) is,

This will lead to a magnetic field, (circuital) inside the plates. At a radial distance r

Q.204. A current I flows along a straight conductor with round cross-section. Find the flux of the Poynting vector across the lateral surface of the conductor's segment with resistance R.

Ans. Suppose the radius of the conductor is R0. Then the conduction current density is

Inside the conductor there is a magnetic field given by

Thus the energy flowing into the conductor = I 2 R.

Q.205. Non-relativistic protons accelerated by a potential difference U form a round beam with current I. Find the magnitude and direction of the Poynting vector outside the beam at a distance r from its axis.

Thus, the moving protons have a charge per unit length

The magnetic field is

radially outward from the axis

This is the Poynting vector.

Q.206. A current flowing in the winding of a long straight solenoid is increased at a sufficiently slow rate. Demonstrate that the rate at which the energy of the magnetic field in the solenoid increases is equal to the flux of the Poynting vector across the lateral surface of the solenoid.

Ans. Within the solenoid

and the rate of change of magnetic energy

where R = radius of cross section of the solenoid l = length.

along the axis within the solenoid.By Faraday’s law, the induced electric field is

Q.207. Fig. 4.39 illustrates a segment of a double line carrying direct current whose direction is indicated by the arrows. Taking into account that the potential

and making use of the Poynting vector, establish on which side (left or right) the source of the current is located.

emeiging out of the paper.

is parallel to the wires and towards right.

Hence source must be on the left.

Q.208. The energy is transferred from a source of constant voltage V to a consumer by means of a long straight coaxial cable with negligible active resistance. The consumed current is I. Find the energy flux across the cross-section of the cable. The conductive sheath is supposed to be thin. 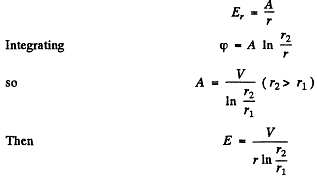 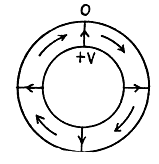 Q.209. A source of ac voltage V = Vo  cos ωt delivers energy to a consumer by means of a long straight coaxial cable with negligible active resistance. The current in the circuit varies as I = = Io  cos ωt — φ). Find the time-averaged energy flux through the cross-section of the cable. The sheath is thin.

Q.210. Demonstrate that at the boundary between two media the normal components of the Poynting vector are continuous, i.e. S1n = S2n.

be along tbe z axis. Then