Q.213. Find the radiation power developed by a non-relativistic particle with charge e and mass m, moving along a circular orbit of radius R in the field of a stationary point charge q.

Q.214. A particle with charge e and mass m. flies with non-relativistic velocity v at a distance b past a stationary particle with charge q. Neglecting the bending of the trajectory of the moving particle, find the energy lost by this particle due to radiation during the total flight time

Ans. Most of the radiation occurs when the moving particle is closest to the stationary particle. In that region, we can write

and apply the previous problem’s formula

(the integral can be taken between

Q.215. A non-relativistic proton enters a half-space along the normal to the transverse uniform magnetic field whose induction equals B = 1.0 T. Find the ratio of the energy lost by the proton due to radiation during its motion in the field to its initial kinetic energy.

Ans. For the semicircular path on the right

(neglecting the change in v due to radiation, correct if

Q.216. A non-relativistic charged particle moves in a transverse uniform magnetic field with induction B. Find the time dependence of the particle's kinetic energy diminishing due to radiation. How soon will its kinetic energy decrease e-fold? Calculate this time interval for the case (a) of an electron, (b) of a proton.

This is the radiated power so

times less for an electron than for a proton so electrons radiate away their energy much faster in a magnetic field.

Ans. P is a fixed point at a distance l from the equilibrium position of the particle. Because / > a, to first order in

The corresponding retarded time is

The radiation fluxes in the two cases are proportional to

Note : The radiation received at P at time t depends on the acceleration of the charge at the retarded time.

Q.218. A charged particle moves uniformly with velocity v along a circle of radius R in the plane xy (Fig. 4.40). An observer is located

on the x axis at a point P which is removed from the centre of the circle by a distance much exceeding R. Find:  (a) the relationship between the observed values of the y projection of the particle's acceleration and the y coordinate of the particle; (b) the ratio of electromagnetic radiation flow densities S1/S2 at the point P at the moments of time when the particle moves, from the standpoint of the observer P, toward him and away from him, as shown in the figure. 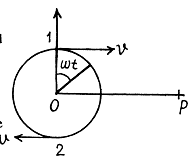 t ' is the observer time then

where we have neglected the effect of the y--cordinate which is of second order. The observed cordinate are

This is the observed acceleration.

Ans. We know that

Q.220. The mean power radiated by an elementary dipole is equal to Po. Find the mean space density of energy of the electromagnetic field in vacuum in the far field zone at the point removed from the dipole by a distance r along the perpendicular drawn to the dipole's axis.

(Poynting flux vector is the energy contained is a box of unit cross section and length c).

Q.221. An electric dipole whose modulus is constant and whose moment is equal to p rotates with constant angular velocity w about the axis drawn at right angles to the axis of the dipole and passing through its midpoint. Find the power radiated by such a dipole.

Ans. The rotating dispole has moments

Q.222. A free electron is located in the field of a plane electromagnetic wave. Neglecting the magnetic component of the wave disturbing its motion, find the ratio of the mean energy radiated by the oscillating electron per unit time to the mean value of the energy flow density of the incident wave.

Ans. If the electric field of the wave is

then this induces a dipole moment whose second derivative is

Q.223. A plane electromagnetic wave with frequency ω falls upon an elastically bonded electron whose natural frequency equals ω0. Neglecting the damping of oscillations, find the ratio of the mean energy dissipated by the electron per unit time to the mean value of the energy flow density of the incident wave.

Ans. For the elastically bound electron

This equation has the particular integral (i.e. neglecting the part which does not have the frequency of the impressed force)

The mean incident poynting flux is

Q.224. Assuming a particle to have the form of a ball and to absorb all incident light, find the radius of a particle for which its gravitational attraction to the Sun is counterbalanced by the force that light exerts on it. The power of light radiated by the Sun equals P = 4.1026  W, and the density of the particle is p = 1.0 g/cm3