Ans. The formula is

of pion. Hence time dilation factor is 1 + η and the distance traversed by the pion in its lifetime will be

on substituting the values of various quantities. (Note. The factor

can be looked at as a time dilation effect in the laboratory frame or as length contraction factor brought to the other side in the proper frame of the pion).

Q.293. Negative pions with kinetic energy T = 100 MeV travel an average distance l = 11 m from their origin to decay. Find the proper lifetime of these pions.

Ans. From the previous problem

is the rest mass of pions.

Q.294. There is a narrow beam of negative pions with kinetic energy T equal to the rest energy of these particles. Find the ratio of fluxes at the sections of the beam separated by a distance l = = 20 m. The proper mean lifetime of these pions is ζo= 25.5 ns.

The law of radioactive decay implies that the flux decrease by the factor.

Q.297. A stationary positive muon disintegrated into a positron and two neutrinos. Find the greatest possible kinetic energy of the positron.

Ans.  The reaction is

The neutrinoes are massless. The positron will carry largest momentum if both neutriones

move in the same direction in the rest frame of the nuon. Then the final product is effectively a two body system and we get from problem (295)

Q.298. A stationary neutral particle disintegrated into a proton with kinetic energy T = 5.3 MeV and a negative pion. Find the mass of that particle. What is its name?

Ans. By conservation of energy-momentum

This is a quadratic equation in M

Q.299. A negative pion with kinetic energy T = 50 MeV disintegrated during its flight into a muon and a neutrino. Find the energy of the neutrino outgoing at right angles to the pion's motion direction.

Ans. See the diagram. By conservation of eneigy

Hence the eneigy of the neutrino is

Q.301. A neutral pion disintegrated during its flight into two gamma quanta with equal energies. The angle of divergence of gamma quanta is

Find the kinetic energy of the pion and of each gamma quantum.

Ans. Here by conservation of momentum

Q.302. A relativistic particle with rest mass m collides with a stationary particle of mass M and activates a reaction leading to formation of new particles: m + M →m1 +m2 . ..,where the rest masses of newly formed particles are written on the right-hand side. Making use of the invariance of the quantity E2  — p2c2 , demonstrate that the threshold kinetic energy of the particle m required for this reaction is defined by Eq. (6.7c).

Ans. With particle masses standing for the names of the particles, the reaction is

On R.H.S. let the energy momenta be

etc. On the left the energy momentum o f the particle m is

and that of the other particle is

where, of course, the usual relations

hold. From the conservation of energy momentum we see that

Left hand side is

We evaluate the R.H.S. in the frame where

(CM frame of the decay product).

because all energies are +ve. Therefore we have the result

Q.303. A positron with kinetic energy T = 750 keV strikes a stationary free electron. As a result of annihilation, two gamma quanta with equal energies appear. Find the angle of divergence between them. 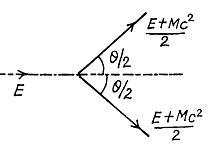 Ans. The formula of problem 3.02 gives

when the projectile is a photon

Q.305. Protons with kinetic energy T strike a stationary hydrogen target. Find the threshold values of T for the following reactions: (a)

Q.306. A hydrogen target is bombarded by pions. Calculate the threshold values of kinetic energies of these pions making possible the following reactions:   (a)

Q.307. Find the strangeness S and the hypercharge Y of a neutral elementary particle whose isotopic spin projection is Tz = +1/2 and baryon charge B = +1. What particle is this?

Ans. From the Gell-Mann Nishijima formula

Q.308. Which of the following processes are forbidden by the law of conservation of lepton charge:

cannot occur as there are 2 more leptons

on the right comopared to zero on the left

is forbidden because this corresponds to a change of lepton number by, (0 on the left - 1 on the right)

being both leptons ΔL = 2hre.

(4) , (5), (6) are allowed (except that one must distinguish between muon neutrinoes and electron neutrinoes). The correct names would be

Q.309. Which of the following processes are forbidden by the law of conservation of strangeness:

Q.310. Indicate the reasons why the following processes are forbidden:

is forbidden by energy conservation. The mass difference

is disallowed by conservation of baryon number.

is forbidden by conservation of charge

is forbidden by strangeness conservation.

is forbidden by conservation of muon number (or lepton number).

is forbidden by the separate conservation of muon number as well as lepton number.