Q. 11. A point participates simultaneously in two harmonic oscillations of the same direction: x1 =  a cos ωt and  x2  = a cos 2ωt.  Find the maximum velocity of the point.

so, the net displacement,

Q. 12. The superposition of two harmonic oscillations of the same direction results in the oscillation of a point according to the law x = a cos 2.1t cos 50.0t, where t is expressed in seconds. Find the angular frequencies of the constituent oscillations and the period with which they beat.

Thus the angular frequencies of constituent oscillations are

To get the beat period note that the variable amplitude a cos 2.1t becomes maximum (positive or negative), when

2.1t = nπ Thus the interval between two maxima is

Ans.  If the frequency of A with respect to K' is v0 and K ' oscillates with frequency

with respect to K, the beat frequency of the point A in the .K-frame will be v when

In the present case

(a) the trajectory equation y (x) of the point and the direction of its motion along this trajectory;

(b) the acceleration ω of the point as a function of its radius vector r relative to the origin of coordinates.

And from the equation :

which is the standard equation of the ellipse shown in the figure, we observe that,

Thus we observe that at t = 0, the point is at point 1 (Fig.) and at the following moments, the co-ordinate y diminishes and x becomes positive. Consequently the motion is clockwise.

Q. 15. Find the trajectory equation y (x) of a point if it moves according to the following laws:

For tiie plots see the plots of answersheet of tlve problem book.

Q. 16. A particle of mass m is located in a unidimensional potential field where the potential energy of the particle depends on the coordinate x as U (x) = U0  (1 — cos ax); U0  and a are constants. Find the period of small oscillations that the particle performs about the equilibrium position.

Q. 17. Solve the foregoing problem if the potential energy has the form U (x) = alx2  — blx, where a and b are positive constants.

We neglect remaining terms for small oscillations and compare with the P.E. for a harmonic, oscillator :

Q. 18. Find the period of small oscillations in a vertical plane performed by a ball of mass m = 40 g fixed at the middle of a horizontally stretched string l = 1.0 m in length. The tension of the string is assumed to be constant and equal to F = 10 N.

Ans. Let us locate and depict the forces acting on the ball at the position when it is at a distance x down from the undeformed position of the string.At this position, the unbalanced downward force on the ball 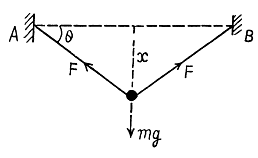 Q. 19. Determine the period of small oscillations of a mathematical pendulum, that is a ball suspended by a thread l = 20 cm in length, if it is located in a liquid whose density is η = 3.0 times less than that of the ball. The resistance of the liquid is to be neglected.

Ans. Let us depict the forces acting on the oscillating ball at an arbitraty angular position 0. (Fig.), relative to equilibrium position where FB is the force of buoyancy. For the ball from the equation : 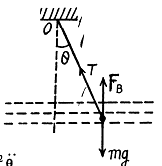 Nz - Iβz (where w e have taken the positive sense of Z axis in the direction of angular velocity i.e.

of the ball and passes through the point of suspension of the pendulum O ), we get : 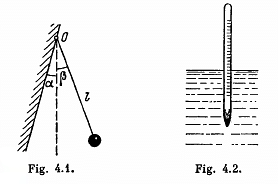 the thread with the ball was deviated through a small angle β(β > α) and set free. Assuming the collision of the ball against the wall to be perfectly elastic, find the oscillation period of such a pendulum.

Ans. Obviously for small p the ball execute part of S.H.M. Due to the perfectly elastic collision the velocity of ball simply reversed. As the ball is in S.H.M. (|θ| < α on the left)its motion law in differential from can be written as

If we assume that the ball is released from the extreme position, θ = β at t = 0, the solution of differential equation would be taken in the form