Q.51. A uniform rod of length 1 performs small oscillations about the horizontal axis 00' perpendicular to the rod and passing through one of its points. Find the distance between the centre of inertia of the rod and the axis 00' at which the oscillation period is the shortest. What is it equal to?

Ans. Let us locate the rod when it is at small angular position 6 relative to its equilibrium position. If a be the sought distance, the n from the conservation of mechanical energy of oscillation

Differentiating w.r.t= time we get :

Hence the time period of one full osscillation becomes

Q.52. A thin uniform plate shaped as an equilateral triangle with a height h performs small oscillations about the horizontal axis coinciding with one of its sides. Find the oscillation period and the reduced length of the given pendulum.

Ans. Consider the moment of inertia of the triangular plate about AB.

On using the area of the triangle

Here 6 is the angle that the instantaneous plane of the plate makes with the equilibrium position which is vertical. (The plate rotates as a rigid body) 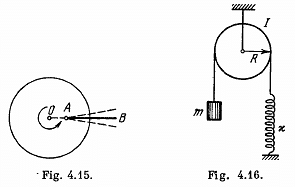 Ans. Let us go to the rotating frame, in which the disc is stationary. In this frame die rod is subjected to coriolis and centrifugal forces, 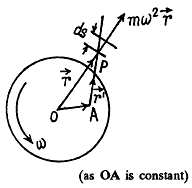 where r is the position of an elemental mass of the rod (Fig.) with respect to point O (disc’s centre) and

As the rod is vibrating transversely, so v' is directed perpendicular to the length of the rod.Hence

for each elemental mass o f the rod is directed along PA. Therefore the net torque of coriolis about A becomes zero. The not torque of centrifulgal force about point A :

Ans. The physical system consists with a pulley and the block. Choosing an intertial frame, let us direct the x-axis as shown in the figure. 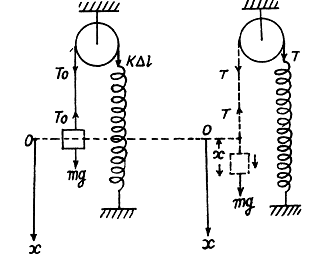 Initially the system is in equilibrium position. Now from the condition of translation equilibrium for the block

Similarly for the rotational equilibrium of the pulley

Now let us disturb the equilibrium of the system no matter in which way to analyse its motion. At an arbitrary position shown in the figure, from Newton's second law of motion for the block

Similarly for the pulley

Solving (4) and (7) using the initial condition of the problem

Note : we may solve this problem by using die conservation of mechanical energy also

Q.55. A uniform cylindrical pulley of mass M and radius R can freely rotate about the horizontal axis 0 (Fig. 4.17). The free end of

a thread tightly wound on the pulley carries a deadweight A. At a certain angle α it counterbalances a point mass in fixed at the rim of the pulley. Find the frequency of small oscillations of the arrangement.

From the equation of rotational dynamics of a solid body about the stationary axis (say 2 -axis) of rotation i.e. from Nz = Iβz

when the pulley is rotated by the small angular displacement 0 in clockwise sense relative to the equilibrium position (Fig.), we get : 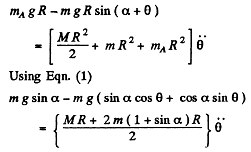 Ans. Let us locate solid cylinder when it is displaced from its stable equilibrium position by the small angle θ during its oscillations (Fig.). If Vc be the instantaneous speed of the C.M. (C) of the solid cylinder which is in pure rolling, then its angular velocity about its own centre C is

Since C moves in a circle of radius (R - r), the speed of C at the same m oment can be written as

As the mechanical energy of oscillation of the solid cylinder is conserved, i.e. E = T + U = constant

Q.57. A solid uniform cylinder of plass m performs small oscillations due to the action of two springs whose combined stiffness is equal to x (Fig. 4.18). Find the period of these oscillations in the absence of sliding.

Ans. Let k1 and k2 be the spring constant o f left and right sides springs. As the rolling o f th< solid cylinder is pure its lowest point becomes the instanteneous centre of rotation. If θ b( the small angular displacement of its upper most point relative to its equilibrium position, the deformation o f each spring becomes (IR Q) . Since the mechanical energy o f oscillation of the solid cylinder is conserved, E = T+ U = constant

Q.58. Two cubes with masses m1 a nd m2  were interconnected by a weightless spring of stiffness x and placed on a smooth horizontal surface. Then the cubes were drawn closer to each other and released simultaneously. Find the natural oscillation frequency of the system.

Ans. In the C.M. frame (which is rigidly attached with the centre of mass of the two cubes) the cubes oscillates. We know that the kinetic energy of two body system equals

, where p. is the reduced mass and is the modulus of velocity of any one body particle relative to other. From the conservation of mechanical energy of oscillation :

Here l0 is the natural length of the spring.Differenting the above equation w.r.t time, we get :

Hence the natural frequency of oscillation :

interconnected by a light spring of stiffness x = 24 N/m. The lefthand ball is imparted the initial velocity v1  = 12 cm/s. Find: (a) the oscillation frequency of the system in the process of motion; (b) the energy and the amplitude of oscillations.

Ans. Suppose the balls 1 & 2 are displaced by x1, x2 from their initial position. Then the eneigy is

Q.60. Find the period of small torsional oscillations of a system consisting of two discs slipped on a thin rod with torsional coefficient k. The moments of inertia of the discs relative to the rod's axis are equal to I1 and l2.

Ans. Suppose the disc 1 rotates by angle θ1 and the disc 2 by angle θ2 in the opposite sense. Then total torsion of the rod =

The KJE. of the system (neglecting the moment of inertia of the rod) is

So total eneigy of the rod

We can put the total angular momentum of the rod equal to zero since the frequency associated with the rigid rotation of the whole system must be zero (and is known).

The angular oscillation, frequency corresponding to this is

Q.61. A mock-up of a CO2  molecule consists of three balls interconnected by identical light springs and placed along a straight line in the state of equilibrium. Such a system can freely perform oscillations of two types, as shown by the arrows in Fig. 4.20. Knowing the masses of the atoms, find the ratio of frequencies of these oscillations.

Ans. In the first mode the carbon atom remains fixed and the oxygen atoms move in equal & opposite steps. Then total energy is

where x is the displacement of one of the 0 atom (say left one). Thus

In this mode the oxygen atoms move in equal steps in the same direction but the carbon atom moves in such a way as to keep the centre of mass fixed.

Q.62. In a cylinder filled up with ideal gas and closed from both ends there is a piston of mass m, and cross-sectional area S (Fig. 4.21).

In equilibrium the piston divides the cylinder into two equal parts, each with volume Vo. The gas pressure is Po. The piston was slighlty displaced from the equilibrium position and released. Find its oscillation frequency, assuming the processes in the gas to be adiabatic and the friction negligible.

Ans. Let, us displace the piston through small distance x, towards right, then from  Fx = mwx

(1)But, the process is adiabatic, so from

as the new volumes of the left and the right parts are now (Vo + Sx) and (Vo - Sx) respectively.So, the Eqn (1) becomes.

in the denominator, as it is very sm all, we get

which is the equation for S.H.M. and hence the oscillating frequency.

Q.63. A small ball of mass m = 21 g suspended by an insulating thread at a height h = 12 cm from a large horizontal conducting plane performs small oscillations (Fig. 4.22). After a charge q had been imparted to the ball, the oscillation period changed η = 2.0 times. Find q.

Ans.  In the absence of the charge, the oscillation period of the ball

when we impart the charge q to the ball, it will be influenced by the induced charges on the conducting plane. From the electric image method the electric force on the ball by the plane

and is directed downward . Thus in this case the effective acceleration of the ball

and the corresponding time period

From the conditon of the problem

Ans. In a magnetic field of induction B the couple on the magnet is - MB sinθ = - MBθ equating this to

The induction of the field increased η2 times.

Q.65. A loop (Fig. 4.23) is formed by two parallel conductors connected by a solenoid with inductance L and a conducting rod of mass m which can freely (without friction) slide over the conductors. The conductors are located in a horizontal plane in a uniform vertical magnetic field with induction B. The distance between the conductors is equal to 1. At the moment t = 0 the rod is imparted an initial velocity vo  directed to the right. Find the law of its motion x (t) if the electric resistance of the loop is negligible.

Ans. We have in the circuit at a certain instant of time (t), from Faraday’s law of electromagnetic induction :

For the rod from the second law of motion   Fx = mwx

The solution of the above differential equation is of the form

But from the initial condition of the problem at