Q.66. A coil of inductance L connects the upper ends of two vertical copper bars separated by a distance l. A horizontal conducting connector of mass m starts falling with zero initial velocity along the bars without losing contact with them. The whole system is located in a uniform magnetic field with induction B perpendicular to the plane of the bars. Find the law of motion x (t) of the connector.

Ans. As the connector moves, an emf is set up in the circuit and a current flows, since the emf is

provided x is measured from the initial position.

for by Lenz’s law the induced current will oppose downward sliding. Finally

Q.67. A point performs damped oscillations according to the law

Find: (a) the oscillation amplitude and the velocity of the point at the moment t = 0; (b) the moments of time at which the point reaches the extreme positions.

Ans. We are given

The term "oscillation amplitude at the moment t = 0" is meaningless. Probably the implication is the amplitude for

sin ωt and amplitude is ao.

when the displacement is an extremum. Then

Q.68. A body performs torsional oscillations according to the law

(a) the angular velocity

and the angular acceleration

of the body at the moment t = 0; (b) the moments of time at which the angular velocity becomes maximum.

Q.69. A point performs damped oscillations with frequency ω and damping coefficient   according to the law (4.1b). Find the initial amplitude a, and the initial phase a if at the moment t = 0 the displacement of the point and its velocity projection are equal to

Since a0 is + ve, we must choose the upper sign if

Q.70. A point performs damped oscillations with frequency ω = = 25 s-1. Find the damping coefficient l if at the initial moment the velocity of the point is equal to zero and its displacement from the equilibrium position is η = 1.020 times less than the amplitude at that moment.

Q.71. A point performs damped oscillations with frequency ω and damping coefficient β. Find the velocity amplitude of the point as a function of time t if at the moment t = 0 (a) its displacement amplitude is equal to a0; (b) the displacement of the point x (0) = 0 and its velocity pro- jection

Velocity amplitude as a function of time is defined in the following manner. Put

This means that the displacement amplitude around the time

and we can say that the displacement amplitude at time

Similarly for the velocity amplitude.Clearly

(a) Velocity amplitude at time

where y is anotner constant

where a0 is real and positive.

and we take - ( + ) sign if x0 is negative (positive). Finally the velocity amplitude is obtained as

Ans. The first oscillation decays faster in time. But if one takes the natural time scale, the period T for each oscillation, the second oscillation attenuates faster during that period.

Q.73. A mathematical pendulum oscillates in a medium for which the logarithmic damping decrement is equal to 20  = 1.50. What will be the logarithmic damping decrement if the resistance of the medium increases n = 2.00 times? How many times has the resistance of the medium to be increased for the oscillations to become impossible?

Ans. By definition of the logarithemic decrement

we get for the original decrement

Q.74. A deadweight suspended from a weightless spring extends it by Δx = 9.8 cm. What will be the oscillation period of the dead Weight when it is pushed slightly in the vertical direction? The logarithmic damping decrement is equal to λ = 3.1.

Ans.  The Eqn of the dead weight is

Q.76. A particle was displaced from the equilibrium position by a distance l = 1.0 cm and then left alone. What is the distance that the particle covers in the process of oscillations till the complete stop, if the logarithmic damping decrement is equal to λ = 0.020? 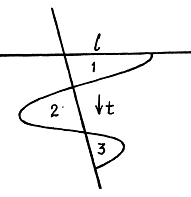 Ans. For an undamped oscillator the mechanical energy

is conserved. For a damped oscillator.

and this is the relevant mechanical energy.

In time δ this decreases by a factor

Q.78. A uniform disc of radius R = 13 cm can rotate about a horizontal axis perpendicular to its plane and passing through the edge of the disc. Find the period of small oscillations of that disc if the logarithmic damping decrement is equal to λ = 1.00.

Ans. The restoring couple is

The moment of inertia is 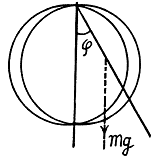 Q.79. A thin uniform disc of mass m and radius R suspended by an elastic thread in the horizontal plane performs torsional oscillations in a liquid. The moment of elastic forces emerging in the thread is equal to N = αφ, where a is a constant and IT is the angle of rotation from the equilibrium position. The resistance force acting on a unit area of the disc is equal to F1 = ηv, where is a constant and η is the velocity of the given element of the disc relative to the liquid. Find the frequency of small oscillation.

Ans. Let us calculate the moment G1 of all the resistive forces on the disc. When the disc rotates an element (rdrdθ) with coordinates (r,θ) has a velocity r

, where φ is the instantaneous angle of rotation from the equilibrium position and r is measured from the centre. Then

Note:- normally by frequency we mean

Q.80. A disc A of radius R suspended by an elastic thread between two stationary planes (Fig. 4.24) performs torsional oscillations about its axis 00'. The moment of inertia of the disc relative to that axis is equal to I, the clearance between the disc and each of the planes is equal to h, with h << R. Find the viscosity of the gas surrounding the disc A if the oscillation period of the disc equals T and the logarithmic damping decrement, λ. 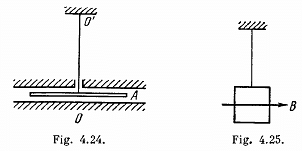 Ans. From the law of viscosity, force per unit area =

(factor 2 for the two sides of the disc; see the figure  in the book) where φ is torsion. The equation of motion is