Q.186. Calculate the Debye temperature for iron in which the propagation velocities of longitudinal and transverse vibrations are equal to 5.85 and 3.23 km/s respectively.

Ans. We proceed as in the previous example. The total number of modes must be 3n0 v (total transverse and one longitudinal per atom). On the other hand the number of transverse modes per unit frequency interval is given by

.while the number of longitudinal modes per unit frequency tnterval is given by

The total number per unit frequency interval is

If the high frequency cut off is at

the total number of modes will be

Here n0 is the number of iron atoms per unit volume. Thus

Substituting the data we get

Q.187. Evaluate the propagation velocity of acoustic vibrations in aluminium whose Debye temperature is

Ans. We apply the same formula but assume

The tabulated values are

Q.188. Derive the formula expressing molar heat capacity of a unidimensional crystal, a chain of identical atoms, as a function of temperature T if the Debye temperature of the chain is equal to

. Simplify the obtained expression for the case T >>

Ans. In the Debye approximation the number of modes per unit frequency interval is given by

The energy per mode is

Then the total interval energy of the chain is

Hence the molar heat capacity is by differentiation

Q.189. In a chain of identical atoms the vibration frequency ω depends on wave number k as ω = ωmax  sin (ka/2), where ωmax is the maximum vibration frequency, k = 2π/λ is the wave number corresponding to frequency ω, a is the distance between neighbouring atoms. Making use of this dispersion relation, find the dependence of the number of longitudinal vibrations per unit frequency interval on ω, i.e. dN/dω, if the length of the chain is l Having obtained dN/dω, find the total number N of possible longitudinal vibrations of the chain.

Ans. If the chain has N atoms, we can assume atom number 0 and N +1 held ficed. Then the displacement of the nth atom has the form

Allowed frequencies then have the form

In our form only +ve k values are allowed.

The number of modes in a wave number range dk is

(b) The total number of modes is

i.e. the number of atoms in the chain.

Q.190. Calculate the zero-point energy per one gram of copper whose Debye temperature is

The zero point energy per gm of copper is

is the atomic weight of the copper.Substitution gives 48-6 J / g m .

Q.191. Fig. 6.10 shows heat capacity of a crystal vs temperature in terms of the Debye theory. Here Ccl is classical heat capacity,

is the Debye temperature. Using this plot, find: 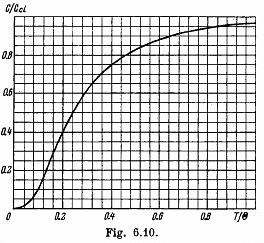 From the graph we see that this

From the graph this corresponds to

Then 80 K corresponds to

The corresponding value of

(c) We calculate © from the datum tha

Q.192. Demonstrate that molar heat capacity of a crystal at a temperature T <<

the third term in the bracket is exponentially small together wil derivatives.Then we can drop the last term

Now from the table in the book

Note Call the 3rd term in the bracket above - U3 Then

The maximum value of

we see that U3 is exponentially small as

. This is also a test of the “ lowness ” of the temperature We see that

Q.194. Calculate the mean zero-point energy per one oscillator of a crystal in terms of the Debye theory if the Debye temperature of the crystal is equal to

Ans. The total zero point energy of 1 mole of the solid is

Dividing this by the number of modes 3N we get the average zero point energy per mode. It is

Q.195. Draw the vibration energy of a crystal as a function of frequency (neglecting the zero-point vibrations). Consider two cases: T =

is the Debye temperature.

Ans. In the Debye model

Plotting then we get the figures given in the answer.

Q.196. Evaluate the maximum values of energy and momentum of a phonon (acoustie quantum) in copper whose Debye temperature is equal to 330 K.

Ans. The maximum energy of the phonon is

where v is velocity o f sound in the crystal. For an order of magnitude estimate we continue to use this result for high

Ans. (a) From the formula

Q.198. What fraction (in per cent) of free electrons in a metal at T = 0 has a kinetic energy exceeding half the maximum energy?

Ans. The fraction is

Ans. We calculate the concentration n of electron in the Na metal from

Q.200. Up to what temperature has one to heat classical electronic gas to make the mean energy of its electrons equal to that of free electrons in copper at T = 0? Only one free electron is supposed to correspond to each copper atom.

Ans. The mean K.E. of electrons in a Fermi gas is

We calculate EF first For Cu