Ans. We write the expression for the number of electrons as

(2 on the RHS is to take care of both spins / electrons). Thus

Substituting the data we get

we get on using

(b) Mean velocity is

Ans. Using the formula of the previous section

Q.204. Calculate the electronic gas pressure in metallic sodium, at T = 0, in which the concentration of free electrons is n = = 2.5.1022 cm-3. Use the equation for the pressure of ideal gas.

Ans. From the kinetic theory of gasses we know

Here U is the total interval energy of the gas. This result is applicable to Fermi gas also Now at T = 0

Substituting the values we get

Q.205. The increase in temperature of a cathode in electronic tube by ΔT = 1.0 K from the value T= 2000 K results in the increase of saturation current by η =  1.4%. Find the work function of electron for the material of the cathode.

where A is the work function in eV. When T increases by ΔT , I increases to (1 + η)I. Then

Expanding and neglecting higher powers of

Q.206. Find the refractive index of metallic sodium for electrons with kinetic energy T = 135 eV. Only one free electron is assumed to correspond to each sodium atom. 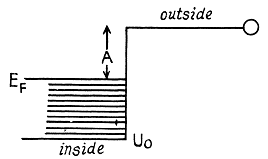 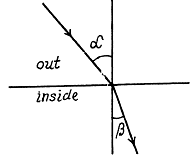 If T is the K.E. of electrons outside the metal, its K.E. inside the metal will be (E + U0) . On entering the metal electron connot experience any tangential force so the tangential component of momentum is unchanged. Then

n by the definition of refractive index

In sodium with one free electron per Na atom

Q.207. Find the minimum energy of electron-hole pair formation in an impurity-free semiconductor whose electric conductance increases η = 5.0 times when the temperature increases from T1  = = 300 K to T2 = 400 K.

Ans. In a pure (intrinsic) semiconductor the conductivity is related to the temperature by the following formula very closely :

where Δε is the eneigy gap between the top of valence band and the bottom of conduction band; it is also the minimum energy required for the formation of electron-hole pair. The conductivity increases with temperature and we have

Q.208. At very low temperatures the photoelectric threshold short wavelength in an impurity-free germanium is equal to λih = 1.7μm. Find the temperature coefficient of resistance of this germanium sample at room temperature.

Ans. The photoelectric threshold determines the band gap Δε by

where σ is the conductivity. But

Q.209. Fig. 6.11 illustrates logarithmic electric conductance as a function of reciprocal temperature (7' in kK units) for some 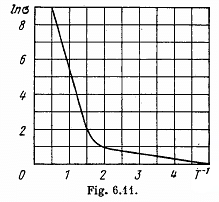 n-type semiconductor. Using this plot, find the width of the forbidden band of the semiconductor and the activation energy of donor levels.

Ans. At high temperatures (small values of T-1) most of the conductivity is intrinsic i.e. it is due to the transition of electrons from the upper levels of the valance band into the lower levels of conduction vands.For this we can apply approximately the formula

From this we get the band gap

The slope must be calculated at small

At low temperatures (high values of

) the conductance is mostly due to impurities. If E0 is the ionization energy of donor levels then we can write the approximate formula (valid at low temperature)

The slope must be calculated at low temperatures. Evaluation gives the slope

Ans. We write the conductivity of the sample as

where σi = intrinsic conductivity and σγ is the photo conductivity. At t = 0, assuming saturation we have

Time t after light source is switched off

where T = mean lifetime of electrons and holes.

Q.211. In Hall effect measurements a plate of width h = 10 mm and length l = 50 mm made of p-type semiconductor was placed in a magnetic field with induction B = 5.0 kG. A potential difference V = 10 V was applied across the edges of the plate. In this case the Hall field is VH = 50 mV and resistivity ρ = 2.5 Ω•cm. Find the concentration of holes and hole mobility.

We shall ignore minority carriers.Drifting holes experience a sideways force in the magnetic field and react by setting up a Hall electric field Eγ to counterbalance it Thus

If the concentration of carriers is n then

Also the mobility is

Q.212. In Hall effect measurements in a magnetic field with induction B = 5.0 kG the transverse electric field strength in an impurity-free germanium turned out to be η = 10 times less than the longitudinal electric field strength. Find the difference in the mobilities of conduction electrons and holes in the given semiconductor.

The net Hall electric field is given by

(we are assuming B = Bz). There is then a transverse drift of electrons and holes and the net transverse current must vanish in equilibrium. Using mobility

On the other hand

Thus, the Hall coefficient is